They turn “blue” as adults.

These two birds were wading and fishing near each other at Green River in Jensen Beach, Martin County, Florida yesterday.

I saw my second Swallow-tailed Kite of the year there. The first was a couple of miles south at Haney Creek the day before. They are coming back from winter in South America.

The lilting Swallow-tailed Kite has been called “the coolest bird on the planet.” With its deeply forked tail and bold black-and-white plumage, it is unmistakable in the summer skies above swamps of the Southeast. Flying with barely a wingbeat and maneuvering with twists of its incredible tail, it chases dragonflies or plucks frogs, lizards, snakes, and nestling birds from tree branches. After rearing its young in a treetop nest, the kite migrates to wintering grounds in South America.

I spotted an American coot. They are winter birds at Green River, so I guess it’s still “winter” for coots.

We spooked some Cattle Egrets who were plucking insects from the grass on the berm where we were walking.

My dogs were off leash there and the older wiser one was being obedient but the younger one was distracted by all the moving living things and her own zippy energy, so she had to be re-leashed.

Common Gallinules look a bit like coots, but they live and breed in these ponds year round.

The weather has been beautiful – that’s March for ya.

A week ago, on March 21st, I went on a field trip organized by the local Audubon to Platt’s Creek Preserve, a restored wetland area in St. Lucie County.

These were Mottled Ducks. We had two expert birders leading the trip, Eva Ries and David Simpson, and their identifications and commentary were so helpful and educational.

A couple of males were fighting for a few minutes. 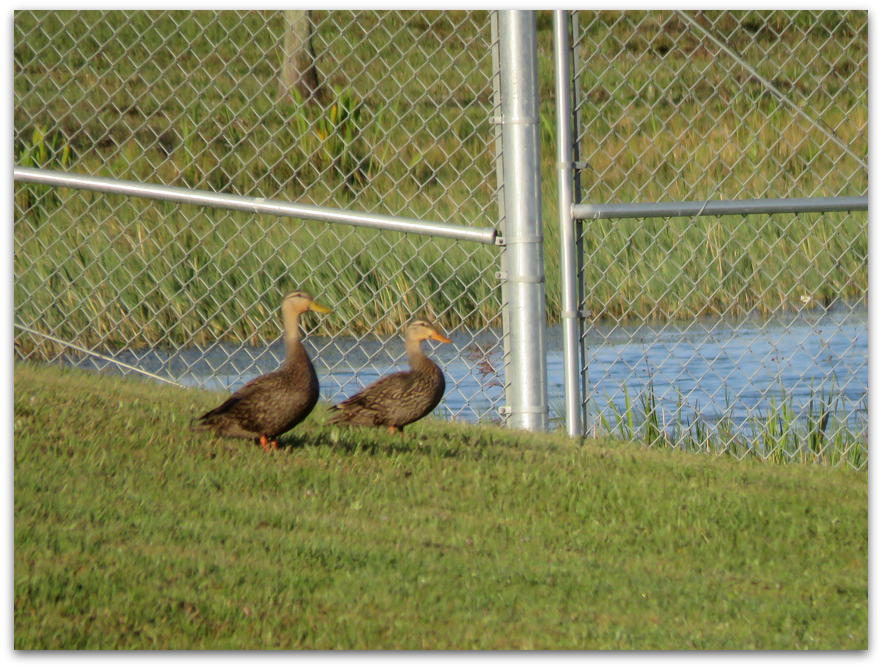 A male and a female watched. 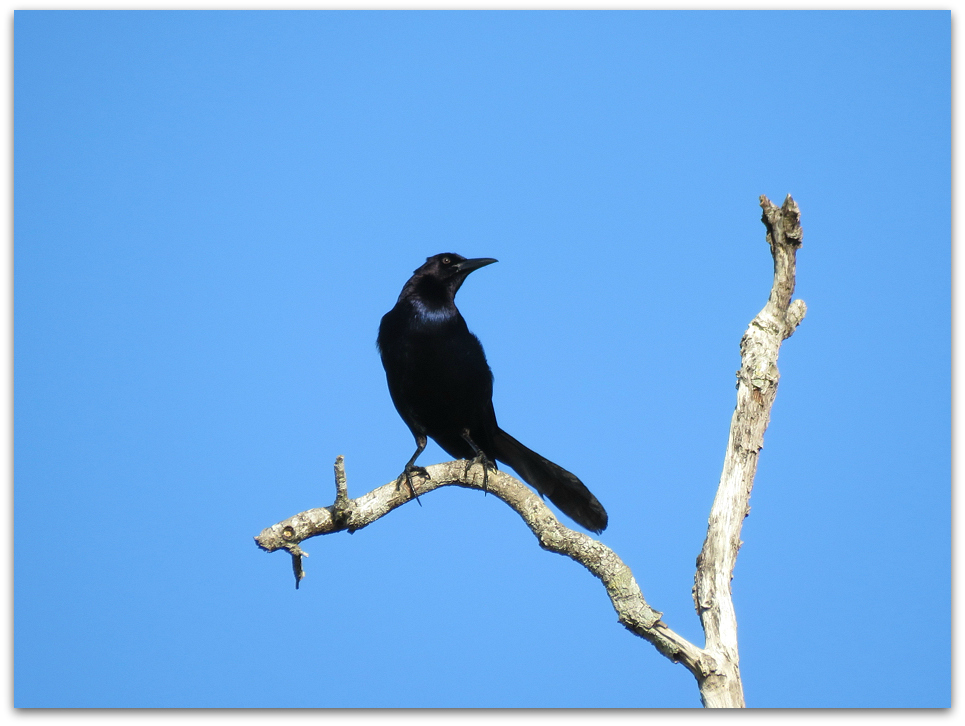 Boat-tailed Grackles were everywhere, and the males were noisy, bold and impossible to ignore. 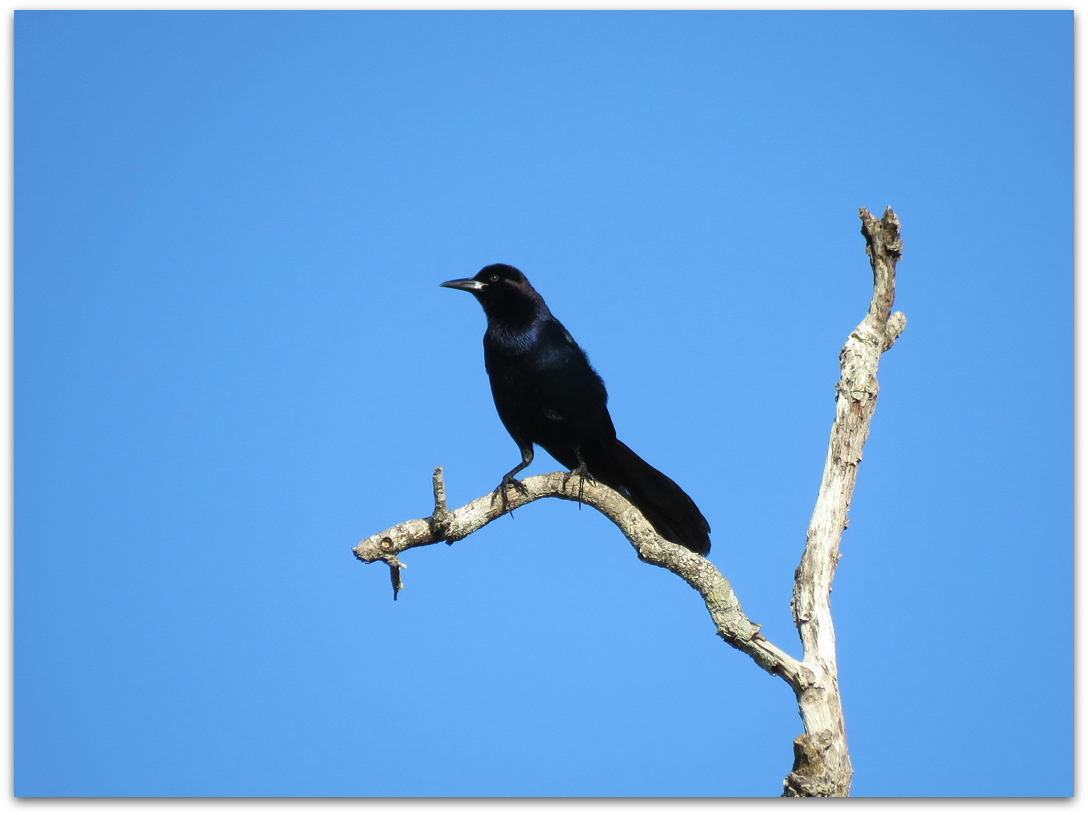 When you smell saltwater on the East Coast, it’s time to look out for Boat-tailed Grackles. The glossy blue-black males are hard to miss as they haul their ridiculously long tails around or display from marsh grasses or telephone wires.

In our party of 10, I am the one who spotted the  Bald Eagle first and I’m pretty proud of that. What a bird, look at those wings!

Northern Harrier that appears to be pursued by a Tree Swallow? This could have just been the angle of the photo, or maybe that little bird was pissed off.

We saw a couple of harriers working the boundaries of the woods and marsh area. Very cool raptors.

The Northern Harrier is distinctive from a long distance away: a slim, long-tailed hawk gliding low over a marsh or grassland, holding its wings in a V-shape and sporting a white patch at the base of its tail. Up close it has an owlish face that helps it hear mice and voles beneath the vegetation. 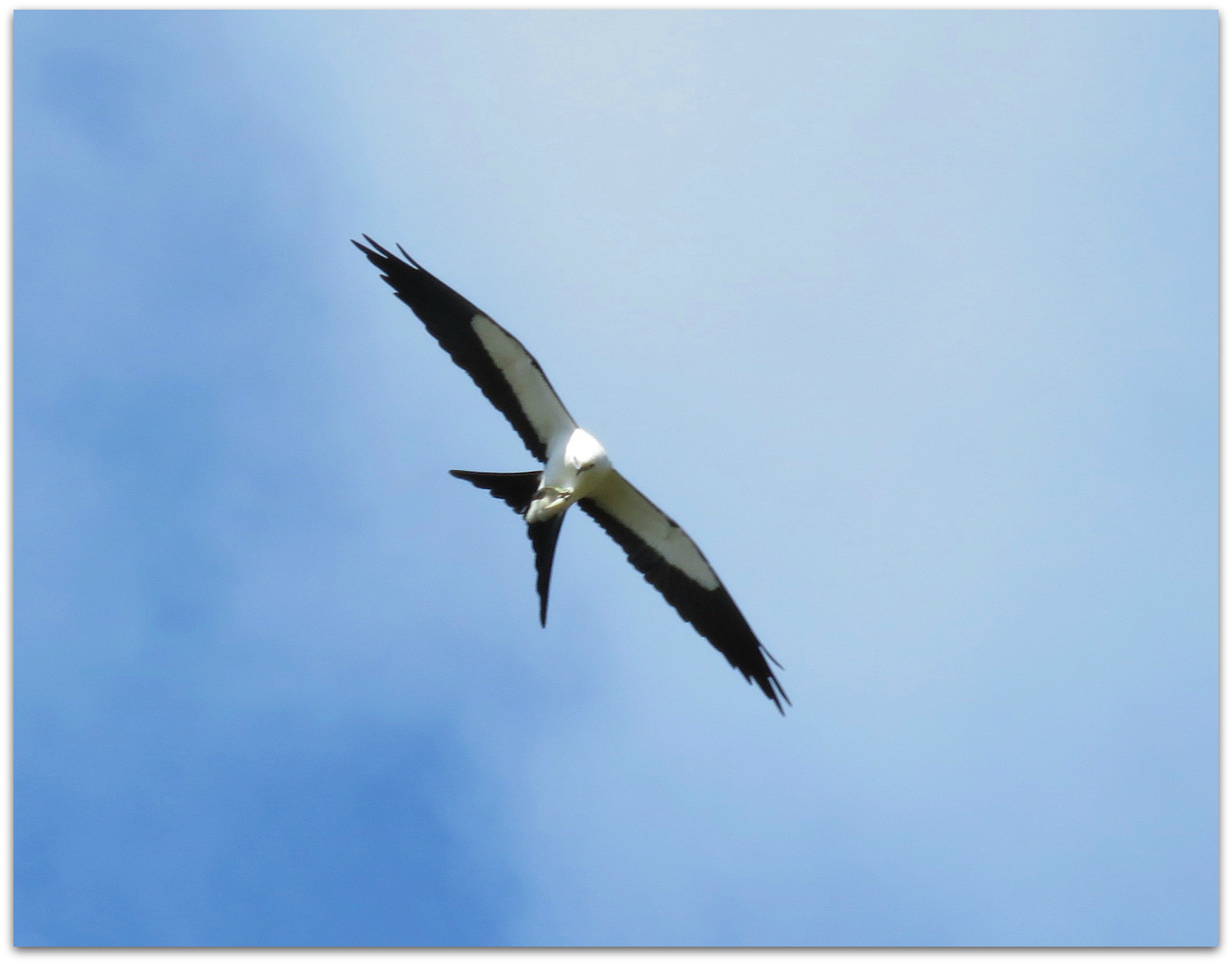 Also soaring around up in the sky, a couple of Swallow-tailed Kites. This one was eating a lizard while flying, nice trick.

The lilting Swallow-tailed Kite has been called “the coolest bird on the planet.” With its deeply forked tail and bold black-and-white plumage, it is unmistakable in the summer skies above swamps of the Southeast. Flying with barely a wingbeat and maneuvering with twists of its incredible tail, it chases dragonflies or plucks frogs, lizards, snakes, and nestling birds from tree branches. After rearing its young in a treetop nest, the kite migrates to wintering grounds in South America. 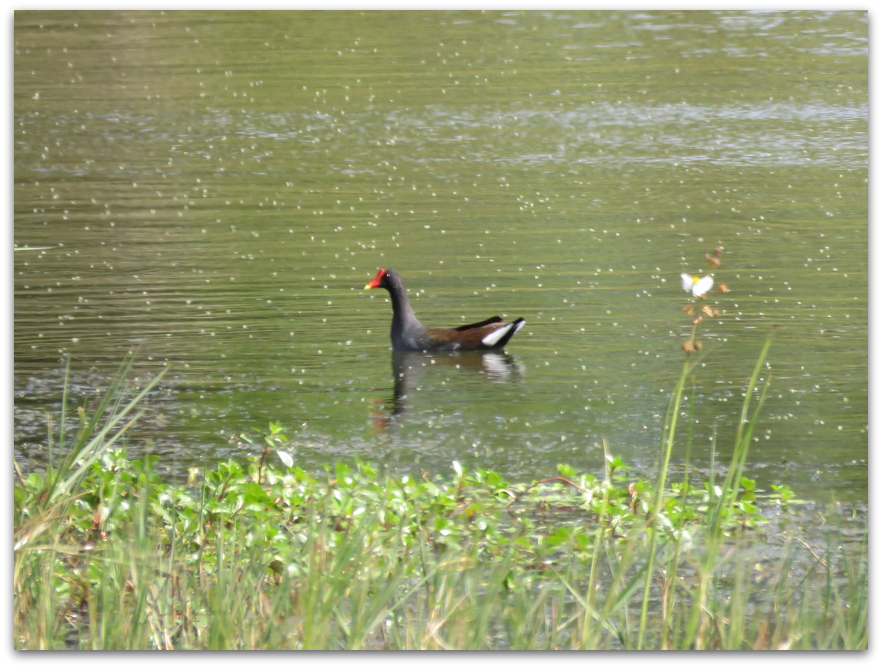 Common Gallinule keeping an eye on us.

Sandhill Crane in someone’s backyard. Some birds are easier to spot than others. 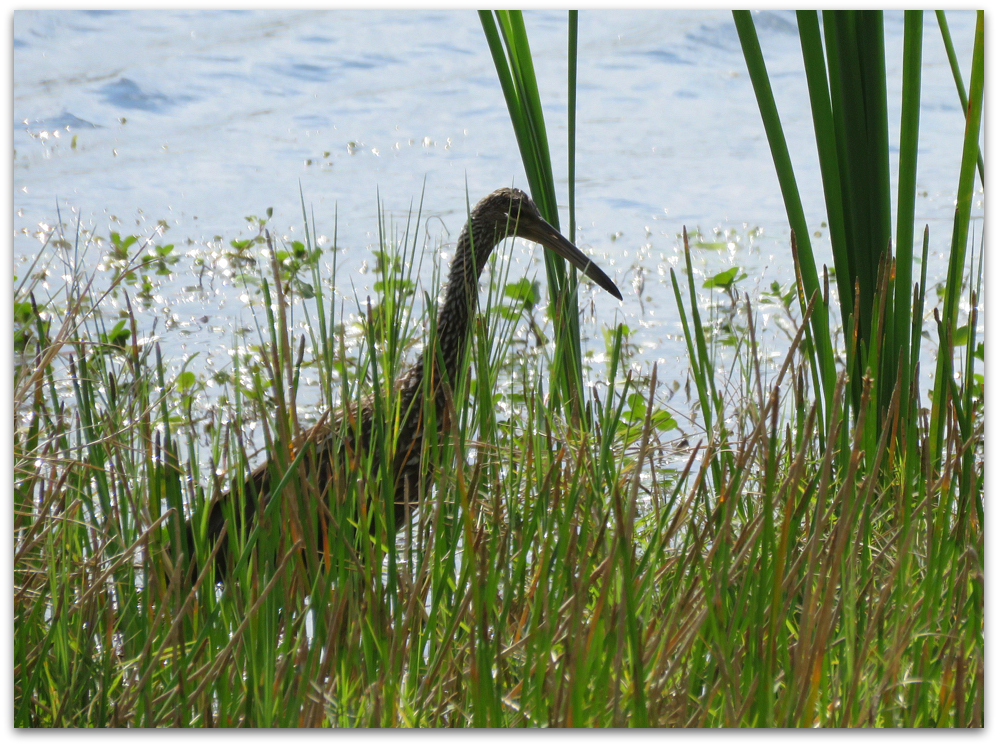 Limpkin stalking the pond side vegetation.

An unusual bird of southern swamps and marshes, the Limpkin reaches the northern limits of its breeding range in Florida. There, it feeds almost exclusively on apple snails, which it extracts from their shells with its long bill. Its screaming cry is unmistakable and evocative.

In all, we tallied 51 species in our 3-hour, 1.5 mile walk. David Simpson posted the checklist to eBird HERE. Very helpful photos and descriptions for us birding newbies!

During our mid-March trip to Costa Rica we drove from Tamarindo to the Arenal area and spent a day and night at the Arenal Volcano Lodge (view from the balcony of our room), with a side visit to Arenal Observatory.

The lodge lured birds with fruit and flowers and running water, to convenient viewing and photography distance. This is a Clay-colored Thrush, I believe.

The clay-colored thrush (Turdus grayi) is a common Middle American bird of the thrush family (Turdidae). It is the national bird of Costa Rica, where it is well known as the yigüirro. Other common names include clay-colored robin.

Someday I would love to write an article about vacation places with the best passive bird watching – like the rental house in Caye Caulker, Belize with a second-story balcony up in the trees… with me in a hammock with a rum drink! 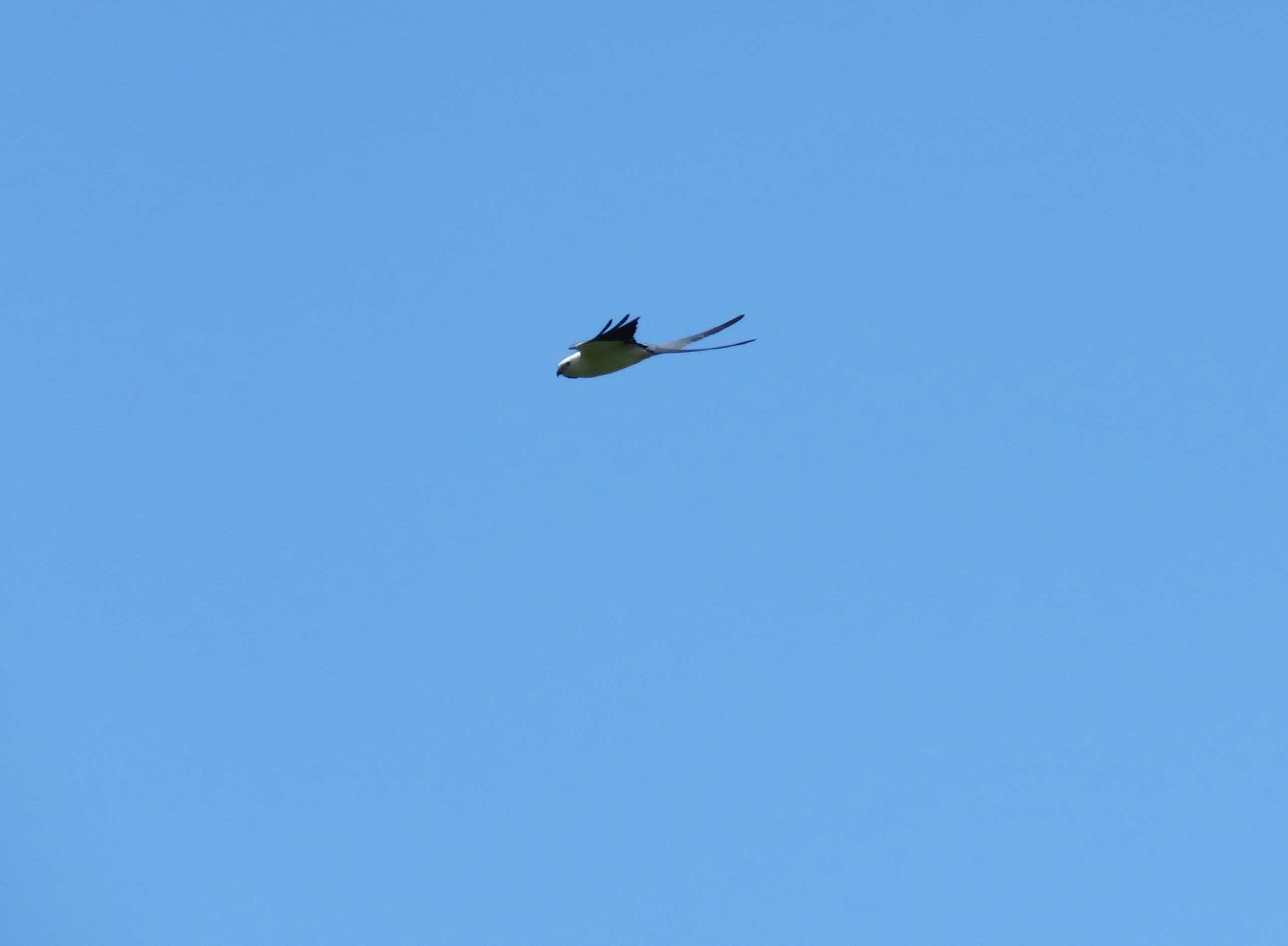 I think this is a Swallow-tailed Kite. We saw many of them but I didn’t get a great pic. Split tail, falcon-like head.

The swallow-tailed kite feeds on small reptiles, such as snakes and lizards. It may also feed on small amphibians such as frogs; large insects, such as grasshoppers, crickets; small birds and eggs; and small mammals including bats. It has been observed to regularly consume fruit in Central America. It drinks by skimming the surface and collecting water in its beak. 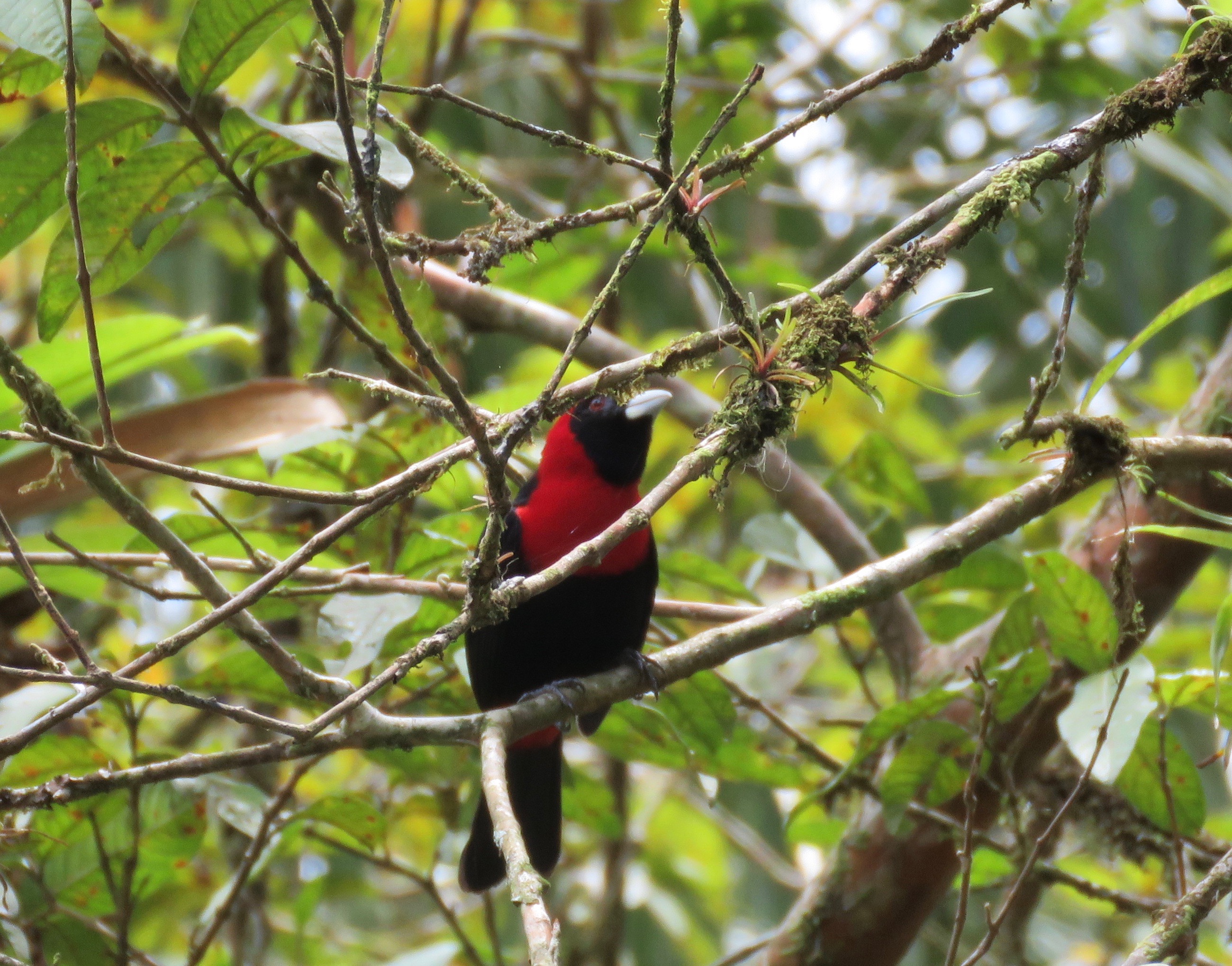 We spotted this Crimson-collared Tanager at the Arenal Observatory, a great side trip with good lunch and many walking trails. LINK

A pretty Blue-gray Tanager was waiting a turn at the feeders.

The Blue-gray Tanager is one of the most widespread, and ubiquitous, birds of the humid lowland neotropics. At almost any location between southeastern Mexico and central South America, it is a familiar presence at forest edge, in second-growth, along roads and rivers, in plantations, and even in urban parks and gardens. 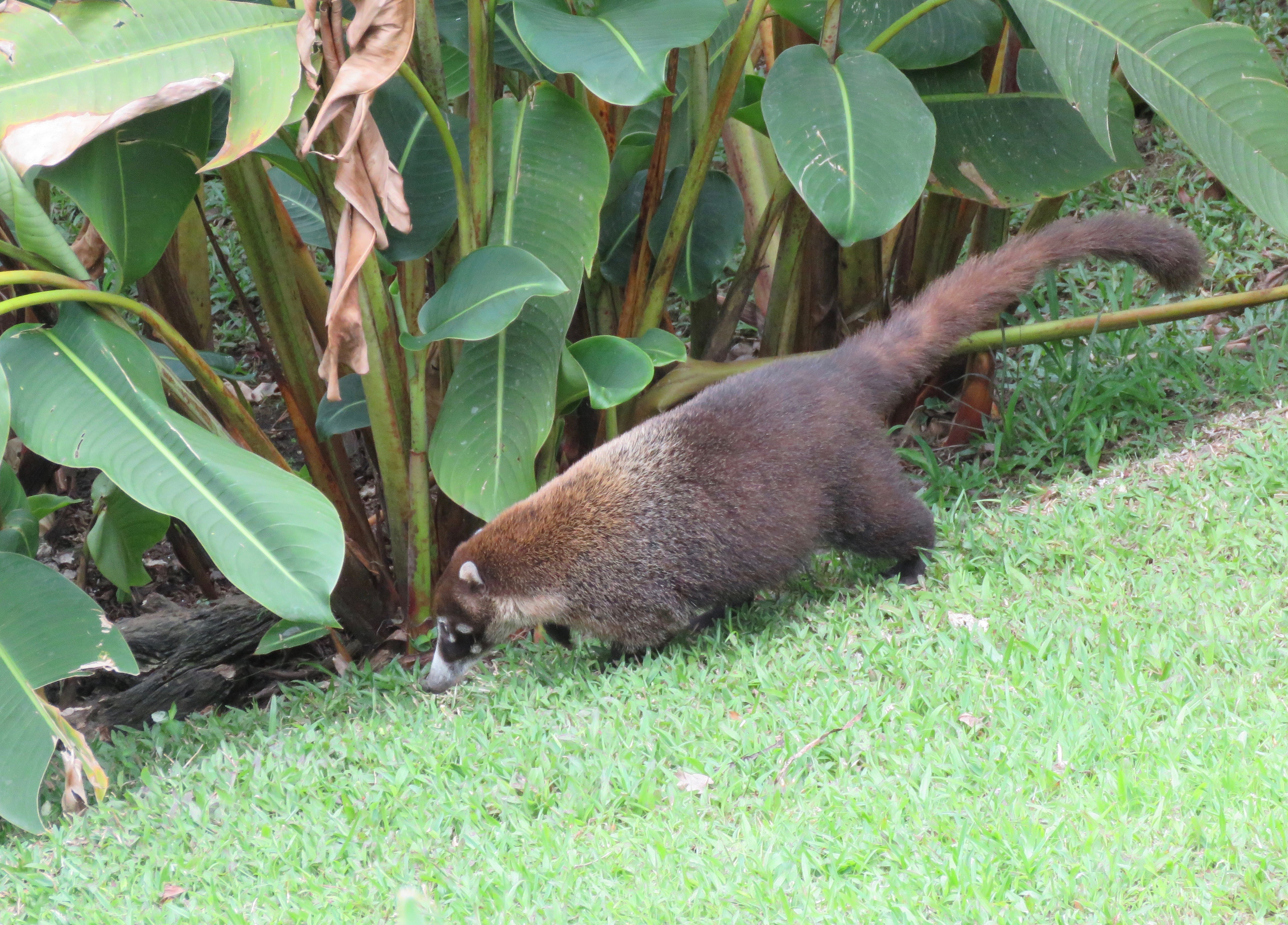 We saw a few coatis, or coatimundis,  charming furry raccoon-like mammal. This one was scouting for fallen fruit under the bird feeders.

These birds were a real treat for me. We watched them while eating lunch at the observatory lodge. 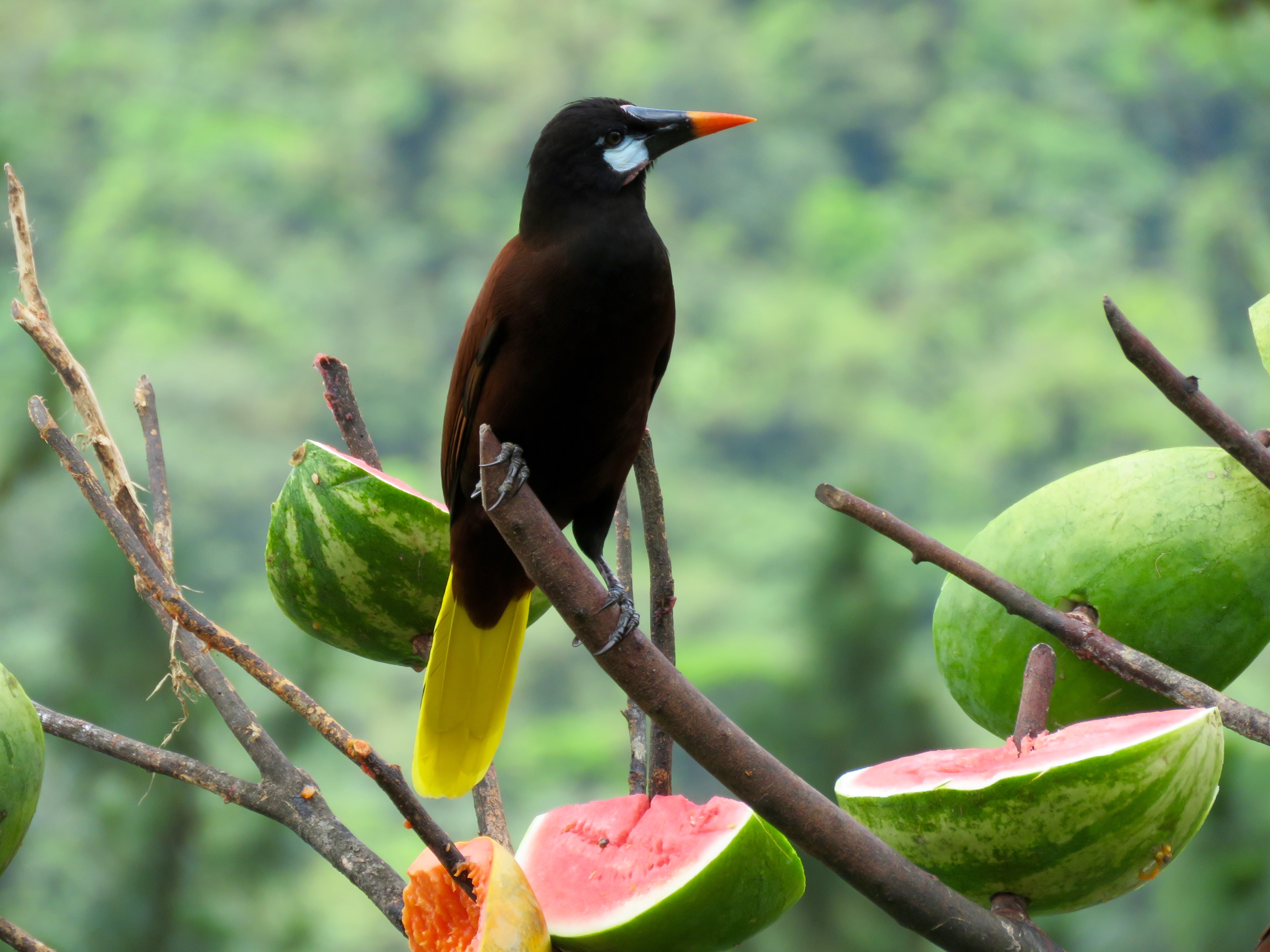 The Montezuma Oropendola is about the size of a crow and quite exotically beautiful. (This is one of my favorite photos from Costa Rica.)

The oropendola, or Montezuma bird as I heard one local call it, is an icterid, a member of the New World blackbird family (like my friends the grackles). It has a kind of crazy and beautiful song, which you can hear HERE.

This is a bird I will never forget.

We found this bird near a trail. It seemed unconcerned by our presence. It is a Crested Guan, I think.

In protected areas where hunting is not allowed, the species can be quite approachable and even tame, but throughout much of its range Crested Guan is heavily hunted.

A bit dinosaur-like, don’t you think? 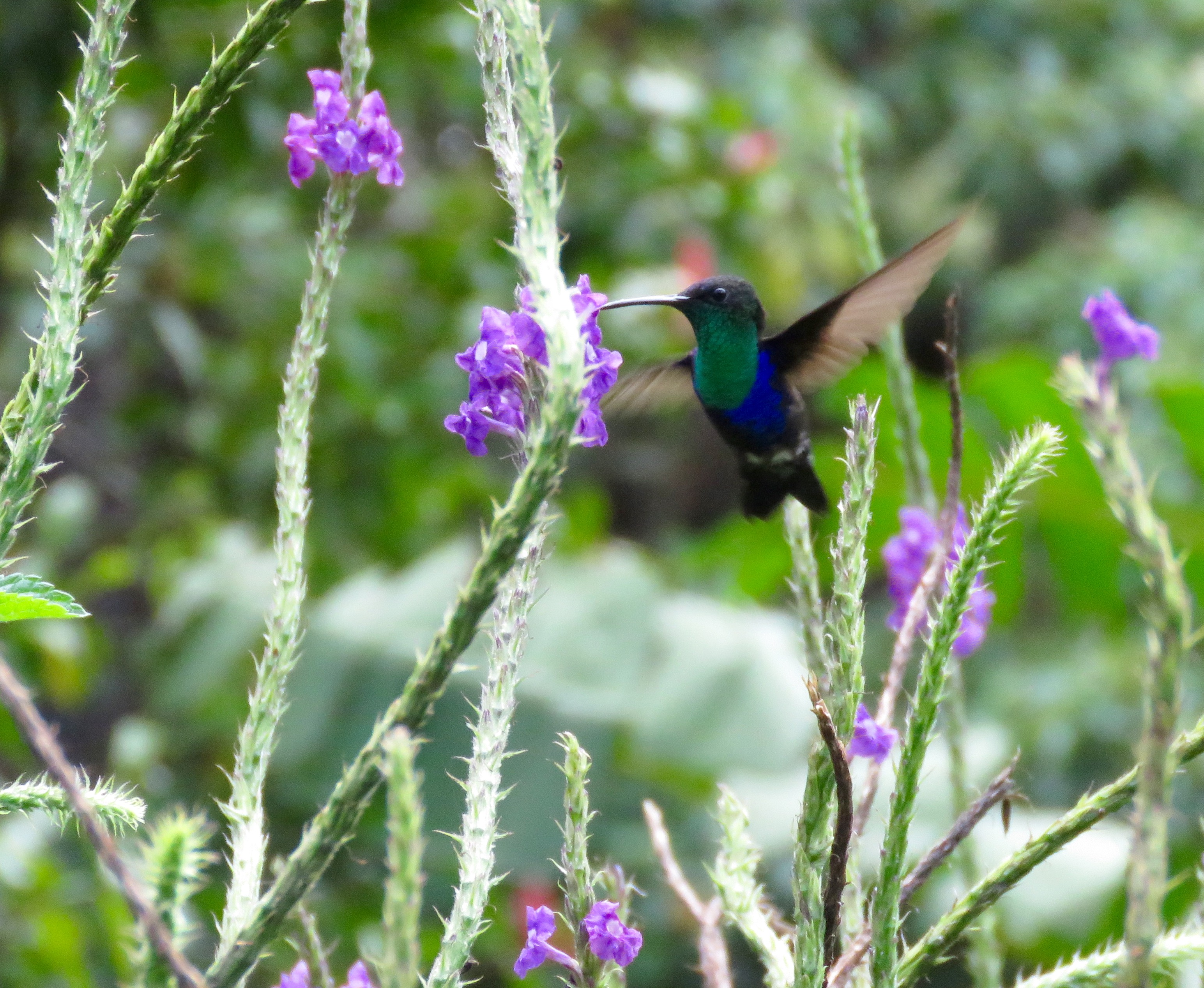 Very happy to capture this flitting jewel of a hummingbird. Not sure what kind it is.

(Update: later IDed via Facebook What’s This Bird as a Crowned Woodnymph.)

From many places we could see the volcano. It has been dormant since 2010, which doesn’t seem like a very long time! 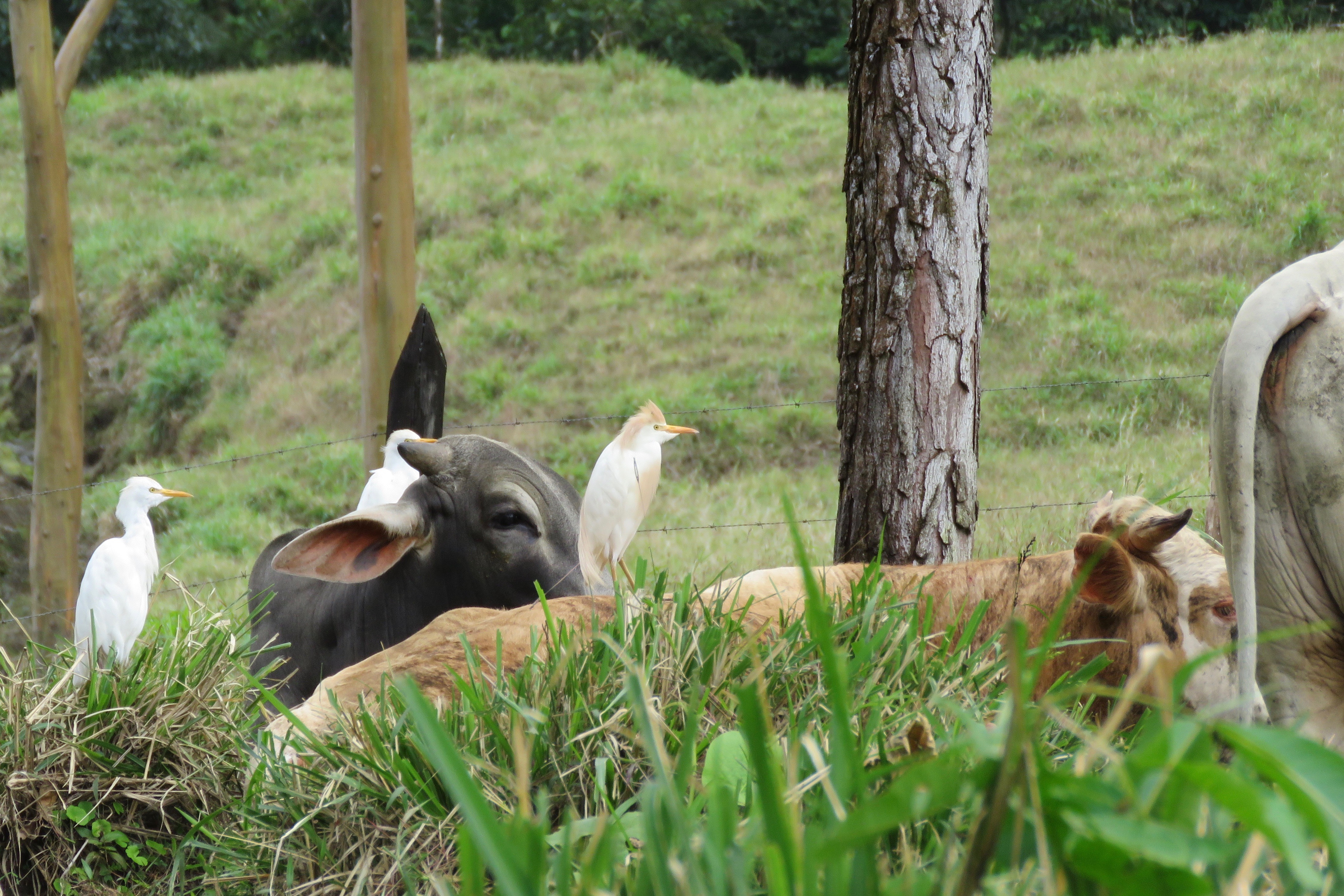 On our little hike we came across some cattle and their bird pals the Cattle Egrets.

The short, thick-necked Cattle Egret spends most of its time in fields rather than streams. It forages at the feet of grazing cattle, head bobbing with each step, or rides on their backs to pick at ticks. This stocky white heron has yellow plumes on its head and neck during breeding season. Originally from Africa, it found its way to North America in 1953 and quickly spread across the continent. Elsewhere in the world, it forages alongside camels, ostriches, rhinos, and tortoises—as well as farmers’ tractors. 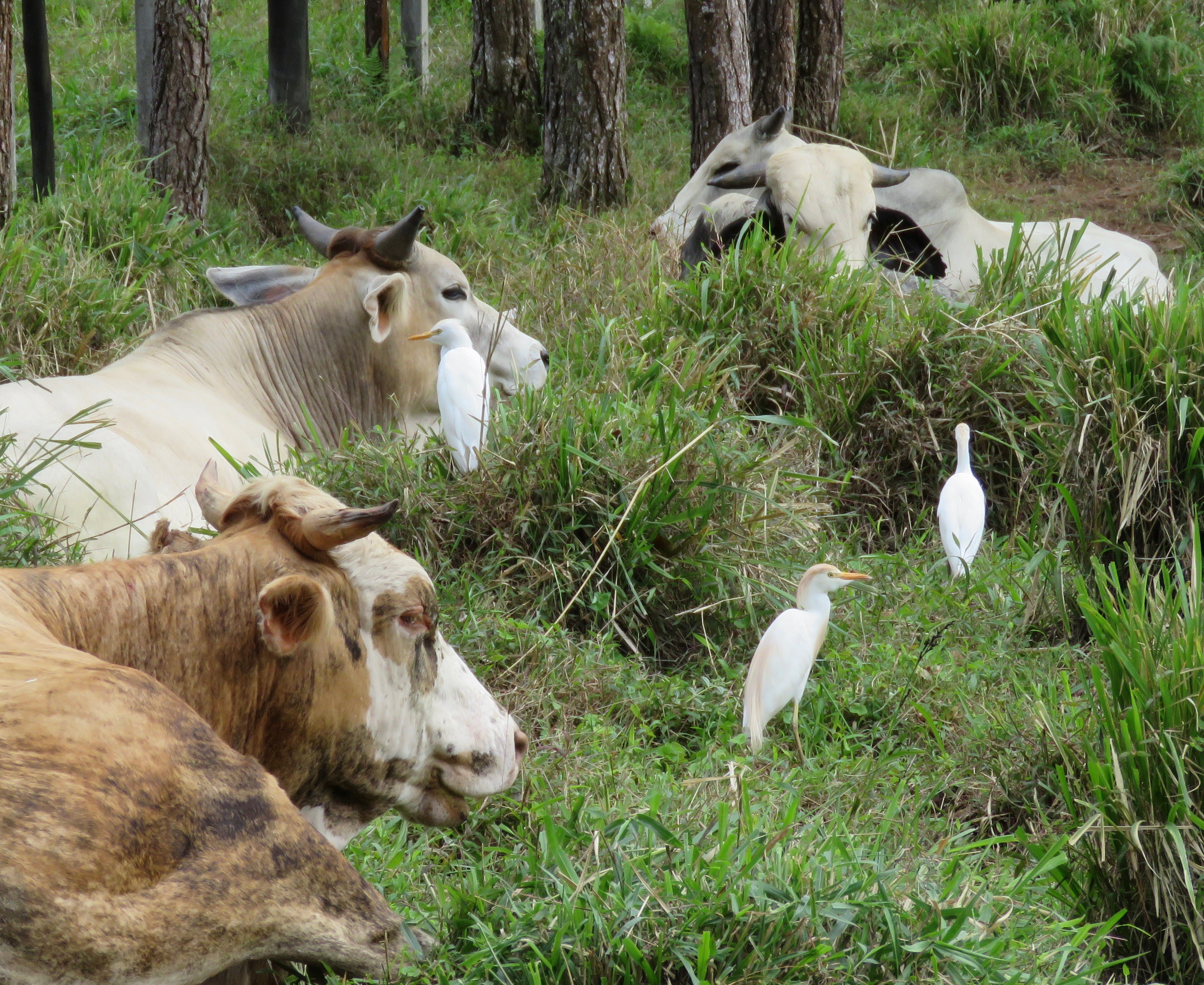 In the woods we saw a Chestnut-mandibled Toucan.

It is one of the larger, more conspicuous species of toucan, and is often noted for its yelping, far-carrying vocalization (described by locals as “Díos te dé!”). It is largely frugivorous, but like other toucans it occasionally feeds on insects, lizards, and the eggs of other birds.

Next morning at the lodge I saw this neat medium-sized bird, a Smooth-billed Ani.

A bird of tropical savannahs in the Caribbean and South America, the Smooth-billed Ani reaches the United States only in southern Florida.

Bear and Ruby #dogfriends #morningwalk Savannas Preserve.
What’s more special than finding a sand dollar? Finding hundreds of living sand dollars burrowing in the sand flats in the Indian River Lagoon off south Hutchinson Island, past the Stuart Sandbar and within sight of the House of Refuge. The living sand dollars had a velvety red-brown skin and were mostly visible just at the edges, as dark circles in the pale sand. We borrowed an Everglades flats boat from the boat club today - first trip out in a few (busy) months. #sanddollars are #seaurchins and have fivefold #radialsymmetry so cool
Ruby is a dog silhouette at dawn. #beachsunrise #gsd #floridasummer #daybreak #goodmorning #hutchinsonisland #stuartflorida