My unscientific observation of this chubby sandpiper, the Ruddy Turnstone, is that it is ADORABLE. 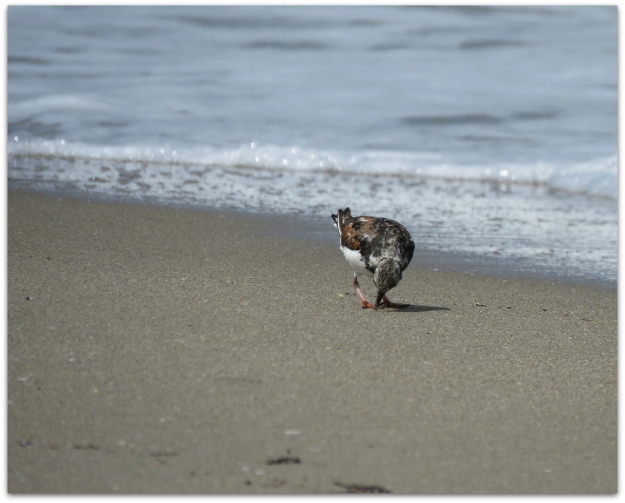 This observation was made yesterday afternoon while sitting in a beach chair on Tiger Shores Beach on Hutchinson Island. No hardship was experienced in the taking of these photos.

Highly trained German Shepherd no longer attempts to retrieve cast lures, as in days of old.

Breezy but not windy, with temps in the upper 80s and an occasional passing tropical shower. There will be no complaints here. 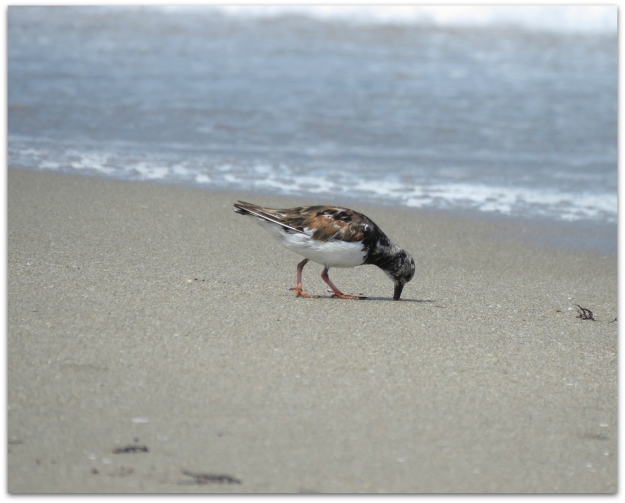 There are about 350 species of shorebirds (order Charadriiformes) in the world, but there are only 2 turnstones, the Ruddy Turnstone and the Black Turnstone, both of which occur in North America.

Young turnstones need to grow up and learn to fly quickly. They take their first flight when they are around 19 days old and fly thousands of miles to the nonbreeding grounds 2 days later. To make things harder, their parents will have departed by this time, leaving the youngsters to make their first migration on their own.

Ruddy Turnstones need to fly fast to cover the enormous distances between their breeding and nonbreeding grounds. Flight speeds of turnstones average between 27 and 47 miles per hour.

We were parked in our new Tommy Bahama “Relax” backpack beach chairs with built in cooling pockets and cup holders for Sunday brunch beverages and a flock of these little guys were coming quite close, hoping for crumbs from our fresh, hot Cuban sandwiches from the nearby Island Pantry. 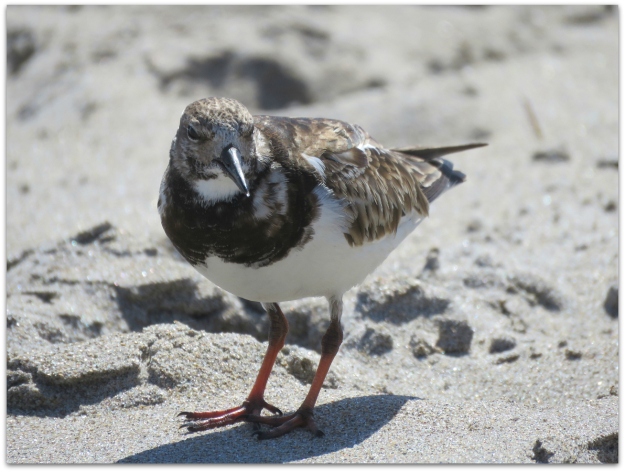 A shorebird that looks almost like a calico cat, the Ruddy Turnstone‘s orange legs and uniquely patterned black-and-white head and chest make them easy to pick out of a crowd. These long-distance migrants breed in the arctic tundra, but spend the off seasons on rocky shorelines and sandy beaches on both North American coasts (as well as South America, Eurasia, Africa, and Australia). They use their stout, slightly upturned bill to flip debris on the beach to uncover insects and small crustaceans. 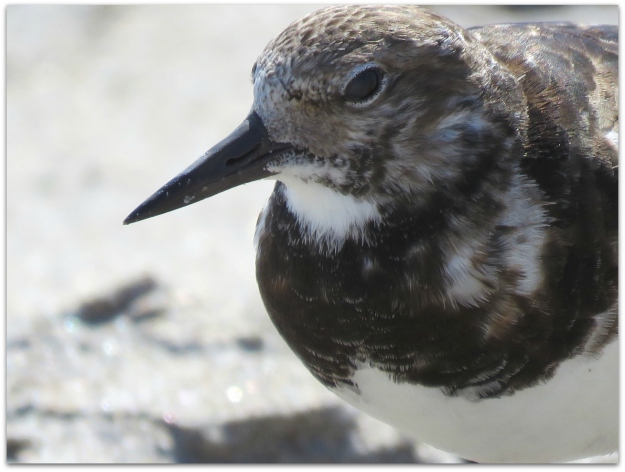 For shorebirds like the Ruddy Turnstone, getting fat is critical. Unlike humans, which use carbohydrates as fuel, birds use fat to power their migrations. Birds that don’t get fat enough before they depart often leave later and some may not even make it to the breeding or wintering grounds. 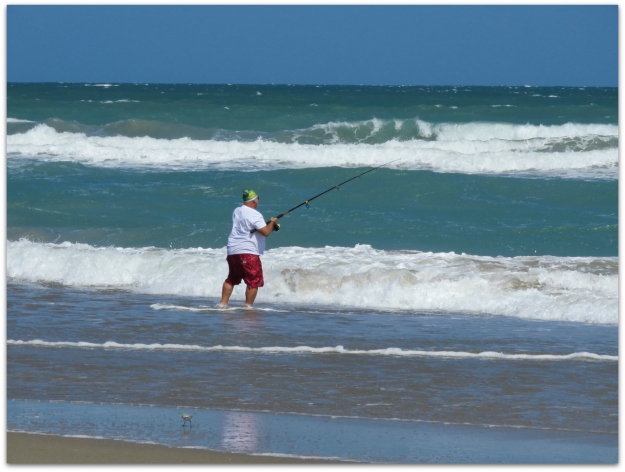 It was a very windy day. Some fishermen battled the elements. 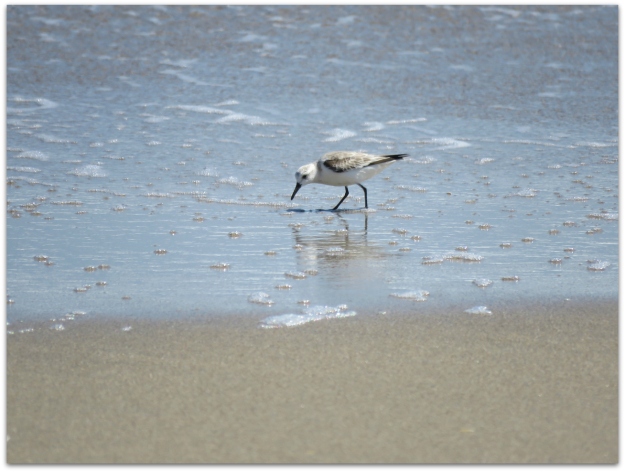 There were some Sanderlings around too, as there often are with Ruddy Turnstones.

A couple of kite surfers were fun to watch just off the beach. 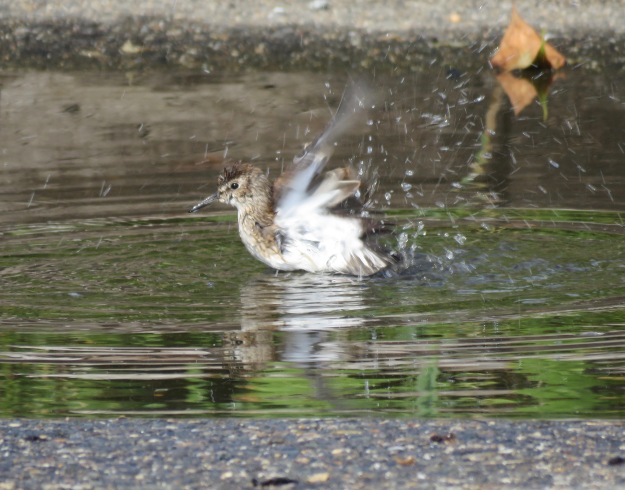 Since it is so tiny and has yellow-green legs, I think it is a Least Sandpiper.

Least Sandpipers are the smallest of the small sandpipers known as “peeps”—not much bigger than a sparrow. They have distinctive yellow-green legs and a high-pitched creep call.

This little bird is just passing through. It’s migration time.

Eastern populations probably fly nonstop over the ocean from the Gulf of St. Lawrence and New England to wintering grounds in northeastern South America, a distance of about 1,800 to 2,500 miles.

8 a.m.: I ditched the backyard scene, with the gobbling, molting grackles, the squabbling, naked-headed bluejays (also in molt) and I headed a couple of miles east to my beach backyard where I blissed out on sandpiper cuteness. 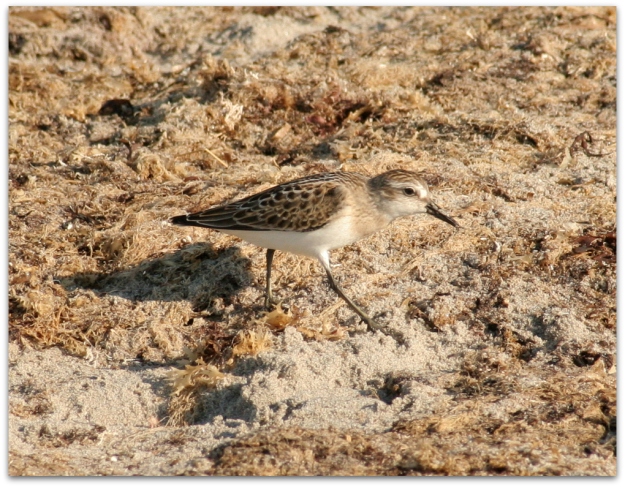 One hundred? two hundred? sandpipers and plovers were running around in the washed-up seaweed at North Hampton State Beach. They camouflage nicely so I guess that’s why the runners and walkers and beach-chair ocean-starers were ignoring the charming little birds.

Some people were doing yoga with their mats rolled out on the clean sand closer to the ocean’s bright edge and the freshly risen sun. One class ended and another began while I was there. The instructor collected checks for $100 from a few people as they were leaving.

Some of them saw me taking pictures of the birds, but they didn’t seem to really see the birds. People see other people. Birds see other birds, and the hulking shapes of people when they are too close.

Plovers would chase each other sometimes, if one violated another’s breakfast-gathering zone, but they ignored the other sandpipers.

At one point I was standing right behind some people in beach chairs, while snapping bird pics, and I sensed they didn’t like how close I had come to their beach zone, reserved early on what promises (with sunshine and calm winds) to be a busy late-summer Sunday.

When there is a lot of seaweed on the sand like this, there is less space for people and more room and food for birds. So I consider the mild stench of rotting seaweed to be worth it to help the big job of shorebird migration.

Is this a semipalmated or piping plover? I don’t know enough to tell the difference. But one is endangered and protected, and limits human use of certain beaches during breeding season, and the other is in good shape.

Staring through a telephoto lens in bright morning sun at tiny, vivacious shorebirds is one way (that works especially well for me) to increase serotonin levels in the human brain without drugs.

A distinct sensation of elation was with me on the car ride home and still, an hour and a half later, now. Let the day begin.