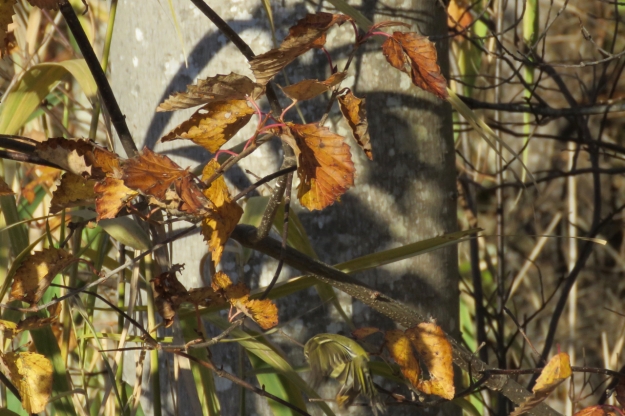 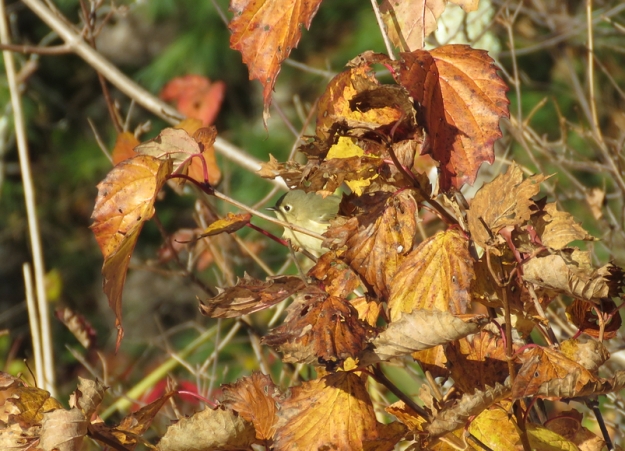 Photos taken this morning out by the pond and wet woods.

Tiny bird flitting around the edge of the pond and woods today. It was new to me so I wanted a photo or two to identify it. It did not hold still for long!

I thought it was a warbler at first. I had a hard time identifying it.

Finally, I looked on eBird at other birders’ lists from local birding hotspots in the last couple of days. One included a photo of a Ruby-crowned Kinglet and I said, AHA!

A tiny bird seemingly overflowing with energy, the Ruby-crowned Kinglet forages almost frantically through lower branches of shrubs and trees. Its habit of constantly flicking its wings is a key identification clue. Smaller than a warbler or chickadee, this plain green-gray bird has a white eyering and a white bar on the wing.

Ruby-crowned Kinglets are fast-moving but quiet little birds that you might overlook at first. If you’re scanning roadside bushes or watching a flock of warblers, you might see one dart into view and keep moving through the foliage, almost too fast for you to keep up. Keep an eye out for their characteristic habit of wing-flicking. Don’t rely on seeing this bird’s ruby crown—it’s often kept completely hidden.

Sunrise under the #ernestlyonsbridge #causewaypark #sunrise #sewallspoint #stuartflorida
Boat-tailed grackle is a little black pirate. #grackle #birdsofinstagram #treasurecoastfl
I got out of my car at the causeway park by the #indianriverlagoon this morning and this was the scene before me and my iphone was in my pocket. One fleeting moment is now a little square keepsake. #instagram #martincountyflorida #stuartfl #rainbowmorning #gonefishing🎣