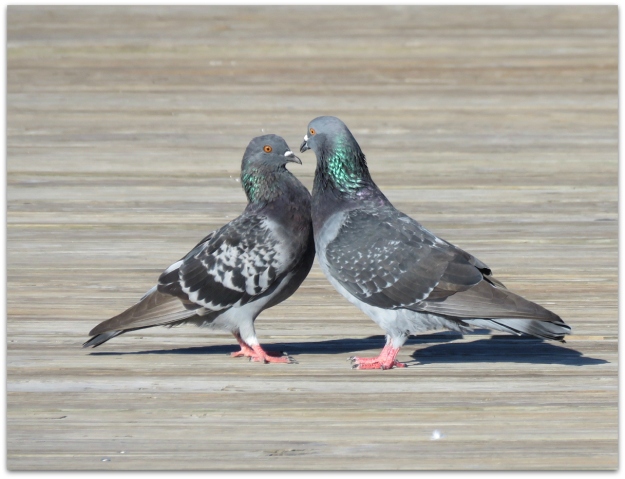 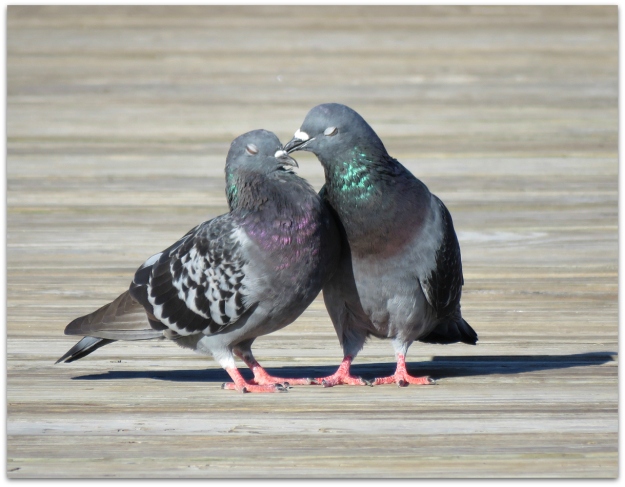 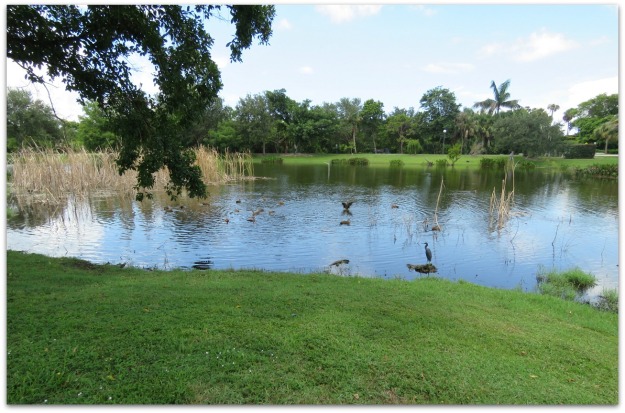 I submitted an eBird checklist for this visit: HERE it is. 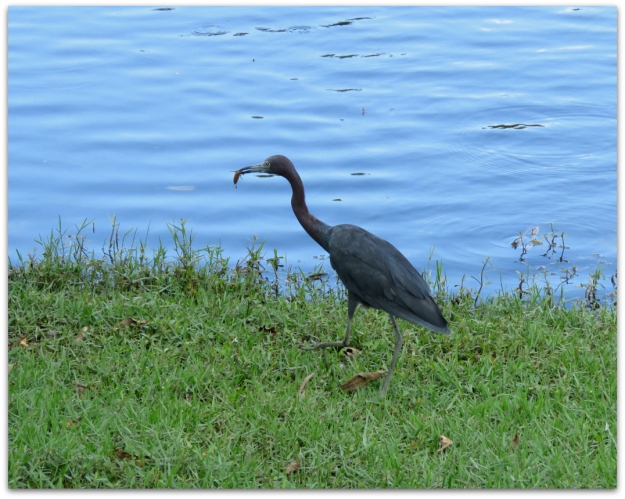 Little Blue Heron grabbed a Big Brown Bug from the grass, dropped it in the water for a second, then swallowed it whole. 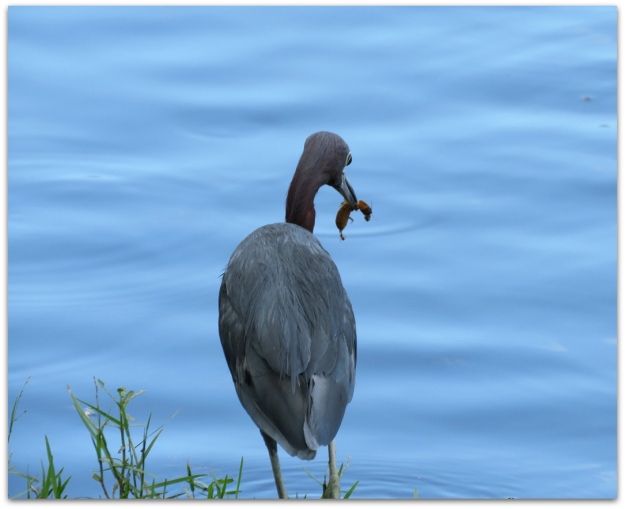 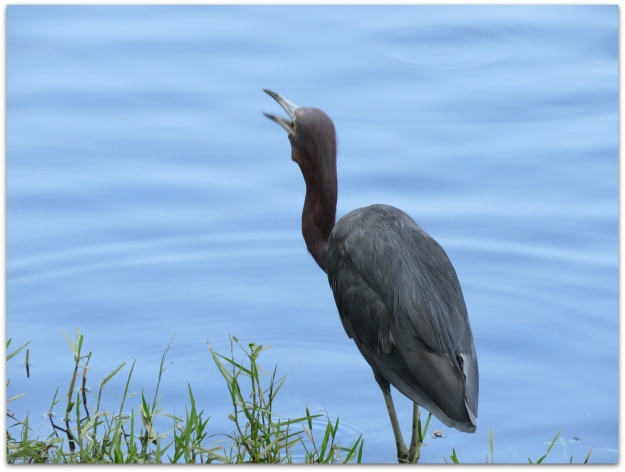 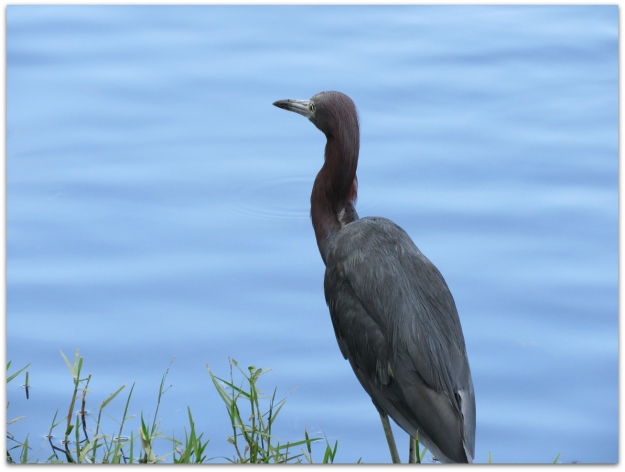 Black-bellied Whistling Ducks were on hand, two by two. 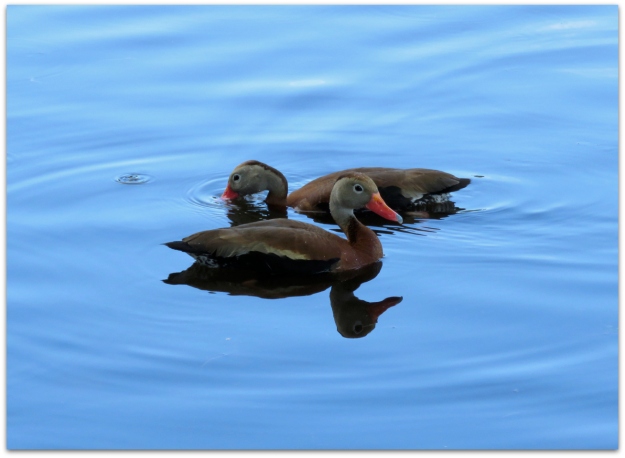 This Green Heron is a juvenile. 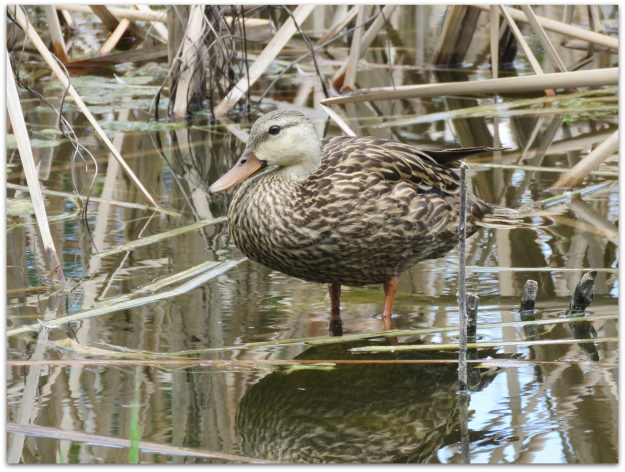 Mottled Ducks were chasing each other all over the pond, in a minor commotion I thought might be due to some new arrivals sorting out the pecking order. Except this one duck was alone in the reeds. 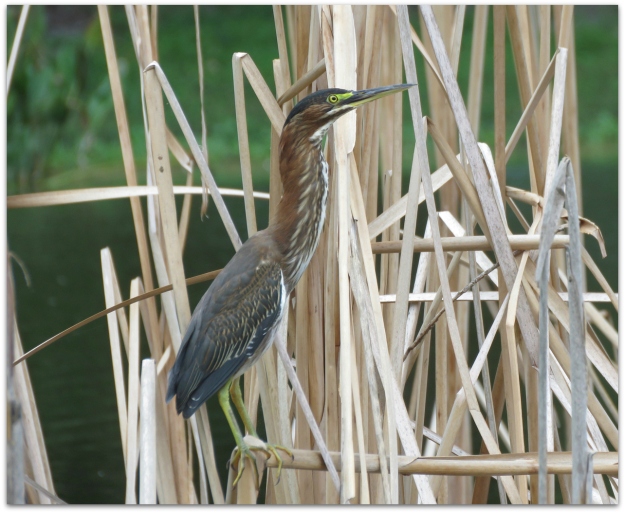 I haven’t seen a Green Heron here before. This one was pretty shy so I didn’t go too close or stay too long in that spot. 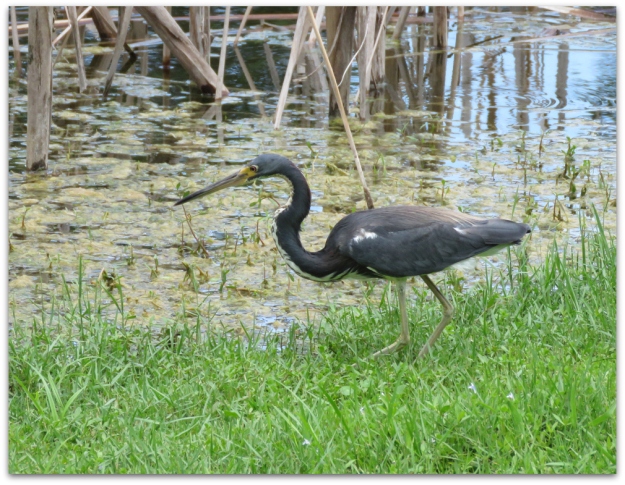 The Tricolored Heron would dance around in front of me all day and never mind.

And Egyptian Geese walk right up to you to see if you have food. (A guy stopped by and fed them peanuts while I was there.) 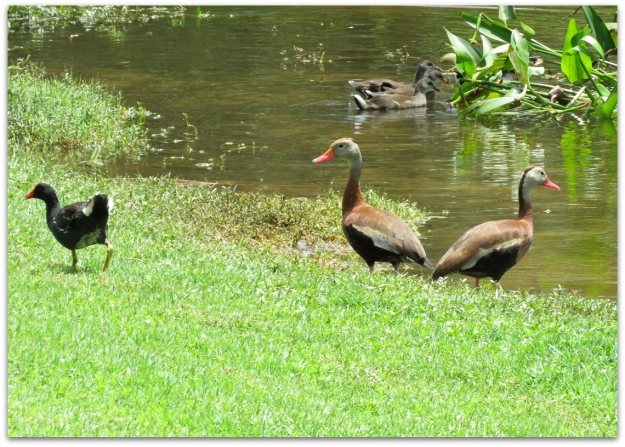 The other pair of Whistling Ducks, on the other side of the pond, was near the Common Gallinule family.

Flyover of about 40 pigeons while I was there, but only one scruffy bird bothered to land… on a trashcan.

Three chicks, one adult in this pic. The whole family I’ve been seeing consistently,  of 2 parents and 4 chicks, was present. 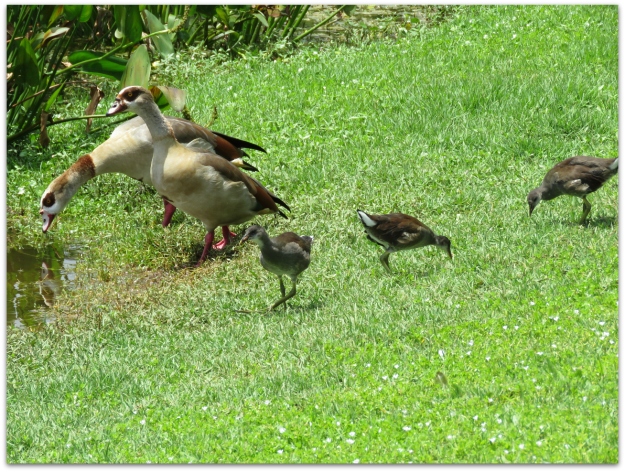 Wood Ducks made an appearance.. Looks like a couple of non-breeding/ juvenile males and a female. 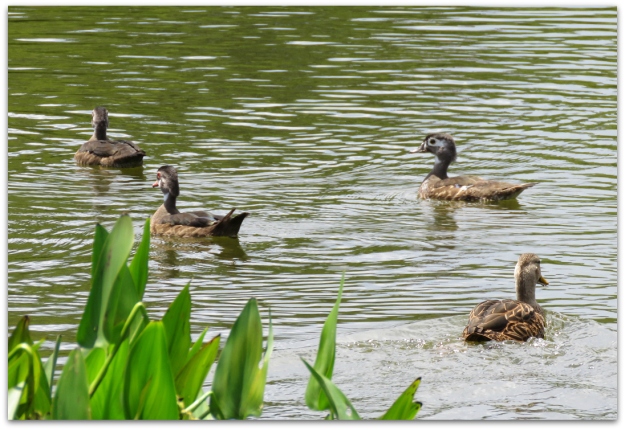 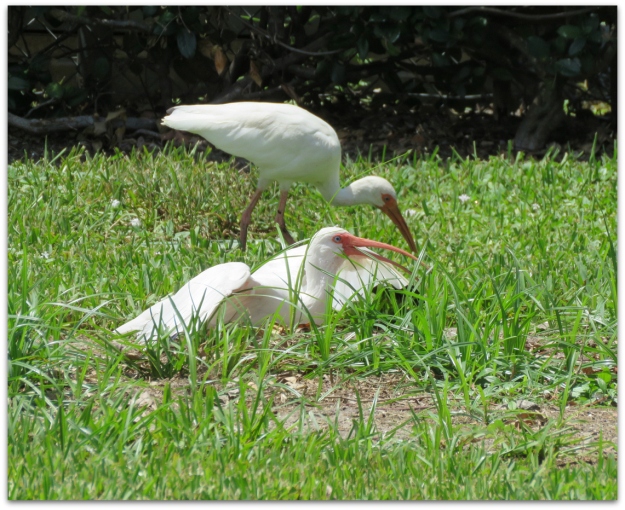 I was driving off but had to roll down my window and zoom in on this charming sight: a White Ibis sunning itself like my chickens used to do.

Why Do Birds Sunbathe?

Many birds are observed sunning even on the hottest days, however, and it is believed that sunning can fulfill purposes other than just temperature regulation. Sunning can help birds convert compounds in their preening oil – secreted from a gland at the base of the tail – into vitamin D, which is essential for good health. If the birds have been in a bird bath or swimming, sunning can help their feathers dry more quickly so they can fly easier, without being weighed down by excess water. It is even believed that some birds sun themselves for pure enjoyment and relaxation, much the same way humans will sunbathe.

The most important reason for sunning, however, is to maintain feather health. Sunning can dislodge feather parasites because the excess heat will encourage insects to move to other places in a bird’s plumage. This will give the bird easier access to get rid of those parasites when preening, and birds are frequently seen preening immediately after sunning. It is essential to get rid of these parasites – the tiny insects that infect feathers can cause problems for a bird’s flight, insulation and appearance, all of which can impact its survival. 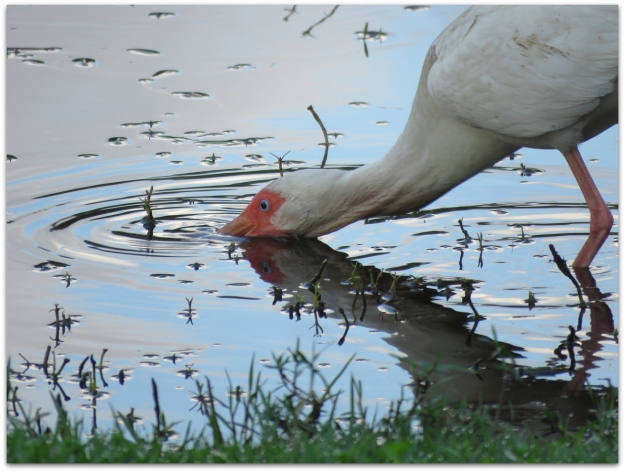 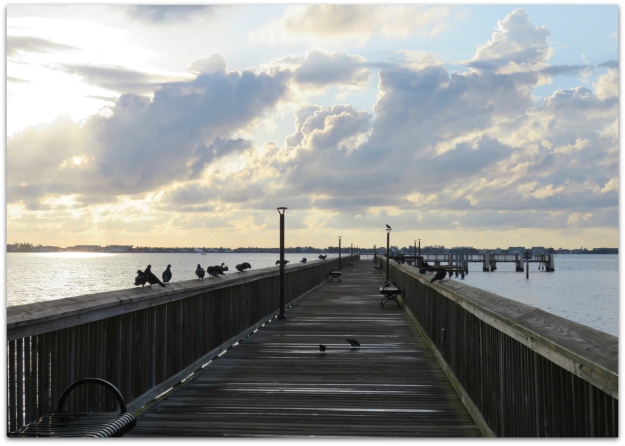 This is the time to be up and out on a July day in Florida.

I walked all of Indian RiverSide Park early this morning, including the fishing pier on the Indian River Lagoon. That’s the barrier island Hutchinson Island across the water. The park is in Jensen Beach. 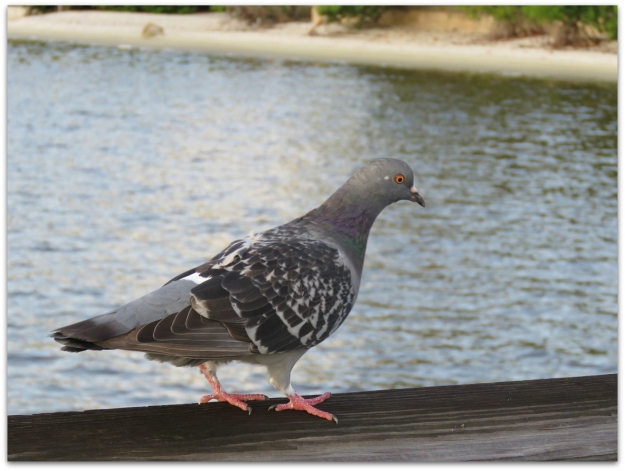 Pigeon on a railing. There are always lots of pigeons here. 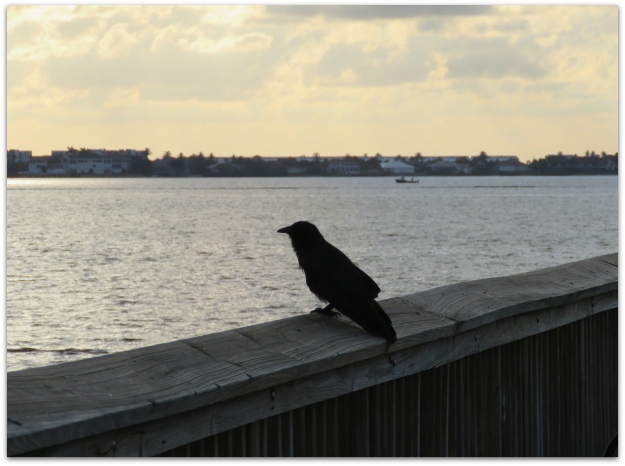 I am 90% sure these guys are Fish Crows, Corvus ossifragus.

Visual differentiation from the American crow is extremely difficult and often inaccurate. Nonetheless, differences apart from size do exist. Fish crows tend to have more slender bills and feet. There may also be a small sharp hook at the end of the upper bill. Fish crows also appear as if they have shorter legs when walking. More dramatically, when calling, fish crows tend to hunch and fluff their throat feathers.

The crows were calm, but I’m pretty good at not spooking the birds. 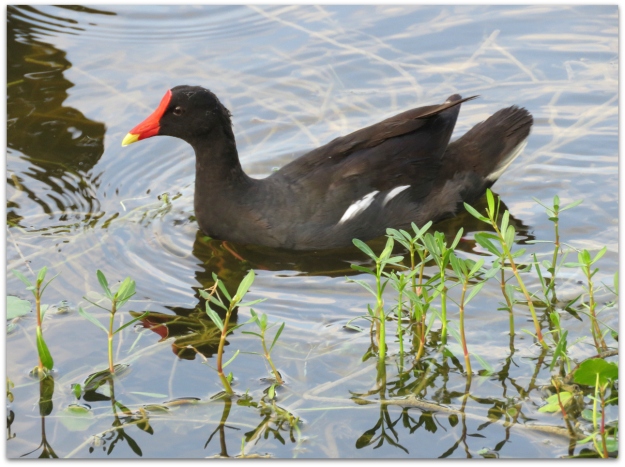 Over in the pond, I spotted just one Common Gallinule. 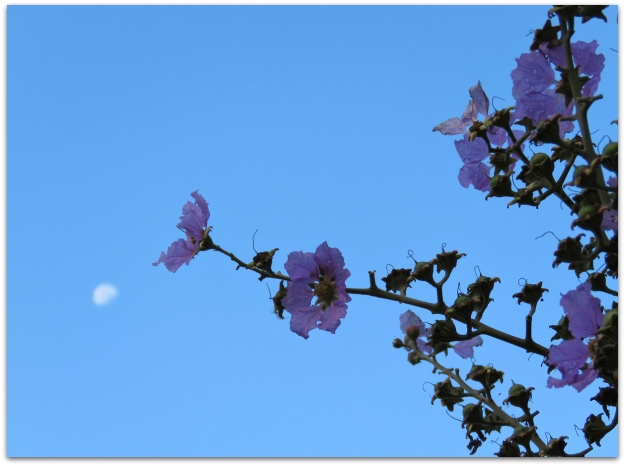 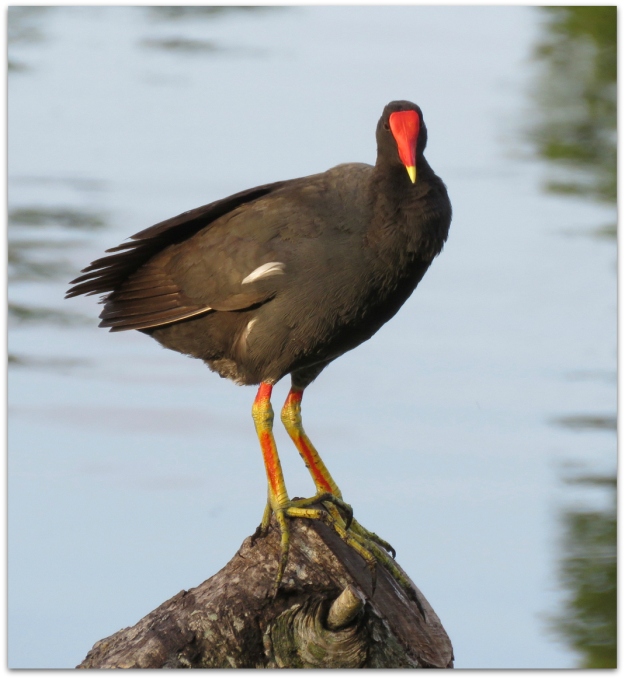 I was pretty excited to get a shot of the gallinule’s feet, usually hiding under water or in a mat of floating vegetation.

The Common Gallinule swims like a duck and walks atop floating vegetation like a rail with its long and slender toes. This boldly marked rail has a brilliant red shield over the bill and a white racing stripe down its side. It squawks and whinnies from thick cover in marshes and ponds from Canada to Chile, peeking in and out of vegetation. This species was formerly called the Common Moorhen and is closely related to moorhen species in the Old World.

The Common Gallinule has long toes that make it possible to walk on soft mud and floating vegetation. The toes have no lobes or webbing to help with swimming, but the gallinule is a good swimmer anyway. 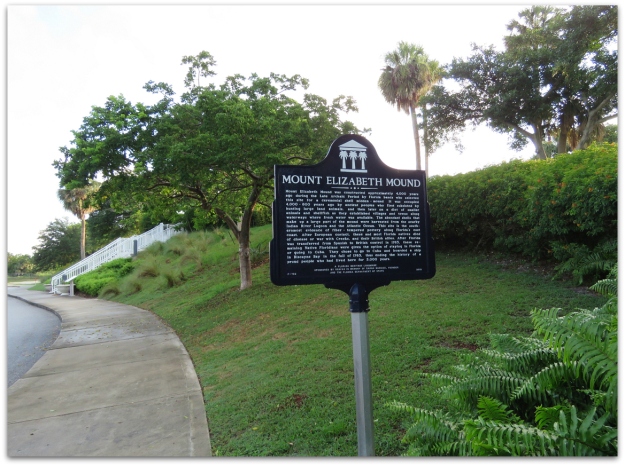 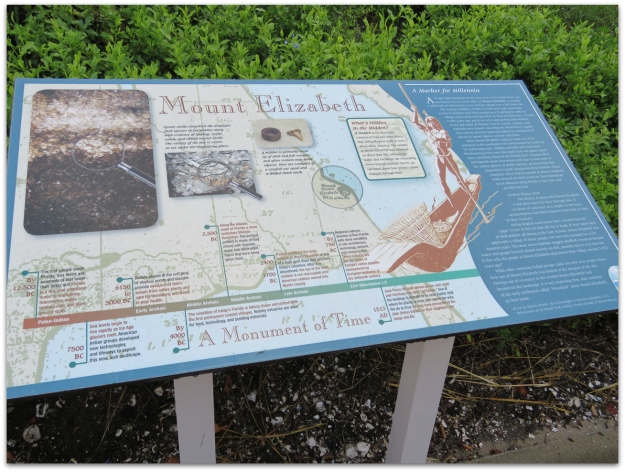 The story of Mount Elizabeth also includes first settlers, a Coca-Cola heiress, nuns, tourists, a college and finally a park. The tale is told by local blogger Jacqui Thurlow-Lippisch HERE.

At the top of the mound today. 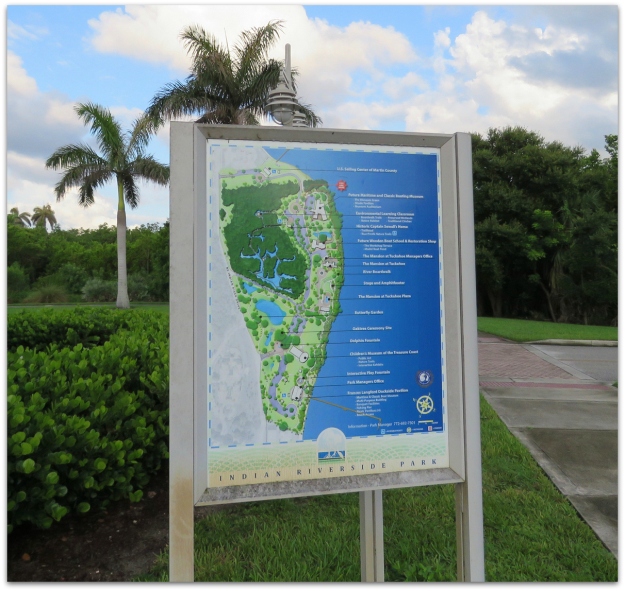 It really is a lovely park, full of many interesting places, so close to home. 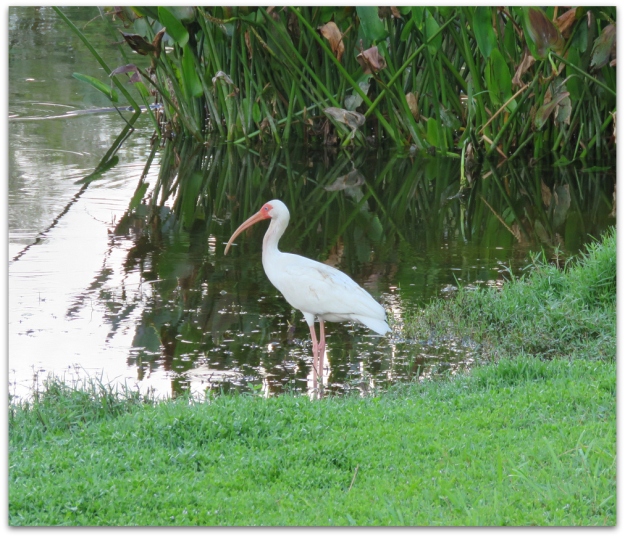 White Ibis likes it there too. 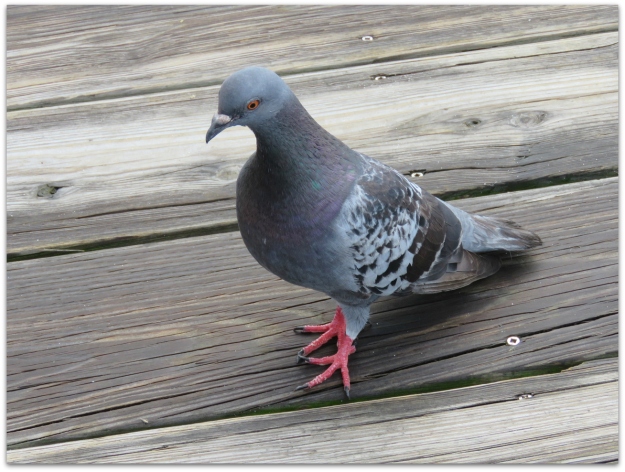 I suppose by definition, yes?

Geek out to the variety of toe arrangements (dactyly) in birds. Pigeons are anisodactyl, like most “perching” birds aka passerines.

Here’s an interesting pigeon toe. It’s got a white nail.

And one white nail on the other foot too.

Does this bird have an all-white great-grandparent? A ceremonial release dove or homing/ racing pigeon that did not go home? 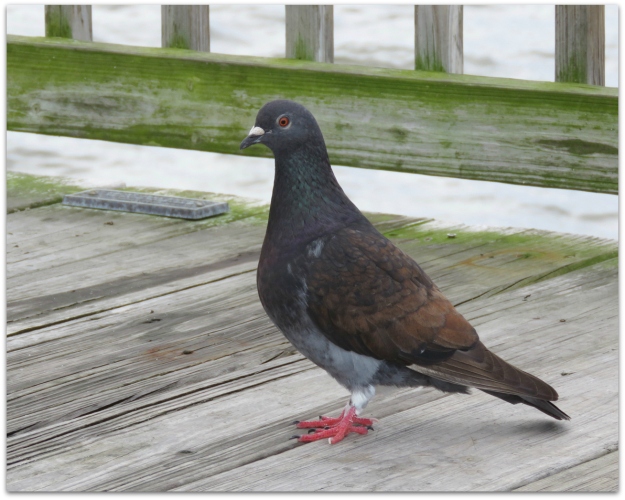 Many pigeons I see regularly on the pier at Indian RiverSide Park have some color variations beyond the blue barred pattern of plain old Columba livia, the rock dove (rock pigeon, common pigeon). Maybe they are descendants of some escaped or released domestic birds?

Hm, technically all pigeons in North America are feral…

The pigeons or rock doves (Columba livia) found in North America are the feral offspring of pigeons brought to this continent by European immigrants. Pigeons are domesticated animals raised for sport racing, show and for food (squab). The ancestors of the pigeons we see in our cities and on our farms escaped from captivity and found a favorable environment living with humans. Feral pigeons now have a cosmopolitan distribution, having become established every place humans have built cities.

The feral pigeons found in Florida and North America are extremely variable in coloration. They exhibit the full range of coloration that domestication and selective breeding have produced. All pigeons that were developed from rock doves (Figure 1) have a white rump, usually a white diamond-shaped patch just above the tail feathers. In white birds the white rump blends with the general body color. Many pigeons have retained the ancestral rock dove coloration: gray body, darker gray head and neck, white rump, dark band on the end of the tail, dark wing tips, and two black stripes running along the back edge of each wing.

They like to hang out with friends and family on the fishing pier at Indian RiverSide Park. Nice spot with beautiful views of the Indian River Lagoon.

Cool facts about “Rock Pigeons” from Cornell Lab of Ornithology…