An Ovenbird perches on a mangrove root, yesterday morning at Ocean Bay Riverside on the shores of the Indian River Lagoon on Hutchinson Island in St. Lucie County.

I followed a couple of these charming little birds for a while, trying to get a few good shots in the dim light of a foggy early morning.

According to Cornell Lab of Ornithology, All About Birds…

The Ovenbird’s rapid-fire teacher-teacher-teacher song rings out in summer hardwood forests from the Mid-Atlantic states to northeastern British Columbia. It’s so loud that it may come as a surprise to find this inconspicuous warbler strutting like a tiny chicken across the dim forest floor. Its olive-brown back and spotted breast are excellent disguise as it gleans invertebrates from the leaf litter.

A tiny chicken, I love it. But why is it called an OVENBIRD?

Its nest, a leaf-covered dome resembling an old-fashioned outdoor oven, gives the Ovenbird its name.

I have seen and photographed an Ovenbird just once before, on North Hutchinson Island (also known as Orchid Island) in Vero Beach, at Captain Forster Hammock Preserve, in September 2019, posted here: Not the hammock you swing in. But that photo was not really in focus, so let me add this focused Ovenbird to my collection.

Ovenbirds winter in Florida, Central America, the Caribbean, and northern South America. At Ocean Bay they are seen mid-April through mid-May, then again late September through October.

Seiurus aurocapilla is in its own genus, genetically distinct from the rest of Parulidae, the New World warblers.

Pet leashed, we set off into the Captain Forster Hammock Preserve, reached via the dirt road Jungle Trail along the Indian River Lagoon in Vero Beach.

If you move to Florida and you like venturing into the outdoors beyond your pool, patio and probably-tiny backyard, you quickly learn that “hammock” isn’t just that nice thing to laze around in…

(The Dream, 1844, by Gustave Courbet, from Wikipedia hammock)

A hammock is also a term for a landscape feature. Think “hummock” but bigger.

Hammock is a term used in the southeastern United States for stands of trees, usually hardwood, that form an ecological island in a contrasting ecosystem. Hammocks grow on elevated areas, often just a few inches high, surrounded by wetlands that are too wet to support them.

It can be a nice place for a walk too, if there are trails.

In this hammock the first living creature we got a good look at was this Zebra Longwing.

They are notable for their long life (compared to other butterflies) and their consumption not just of nectar but of protein-packed pollen too… and the two things seem to be connected.

Zebra Longwings live an unusually long life, and can survive more than a month as adults rather than the typical 1–2 weeks as most butterflies. This is partly because they ingest pollen as well as nectar, giving the Longwings an extra source of protein.

(Inspired, I added whey powder to my breakfast smoothie while writing this blog post.) 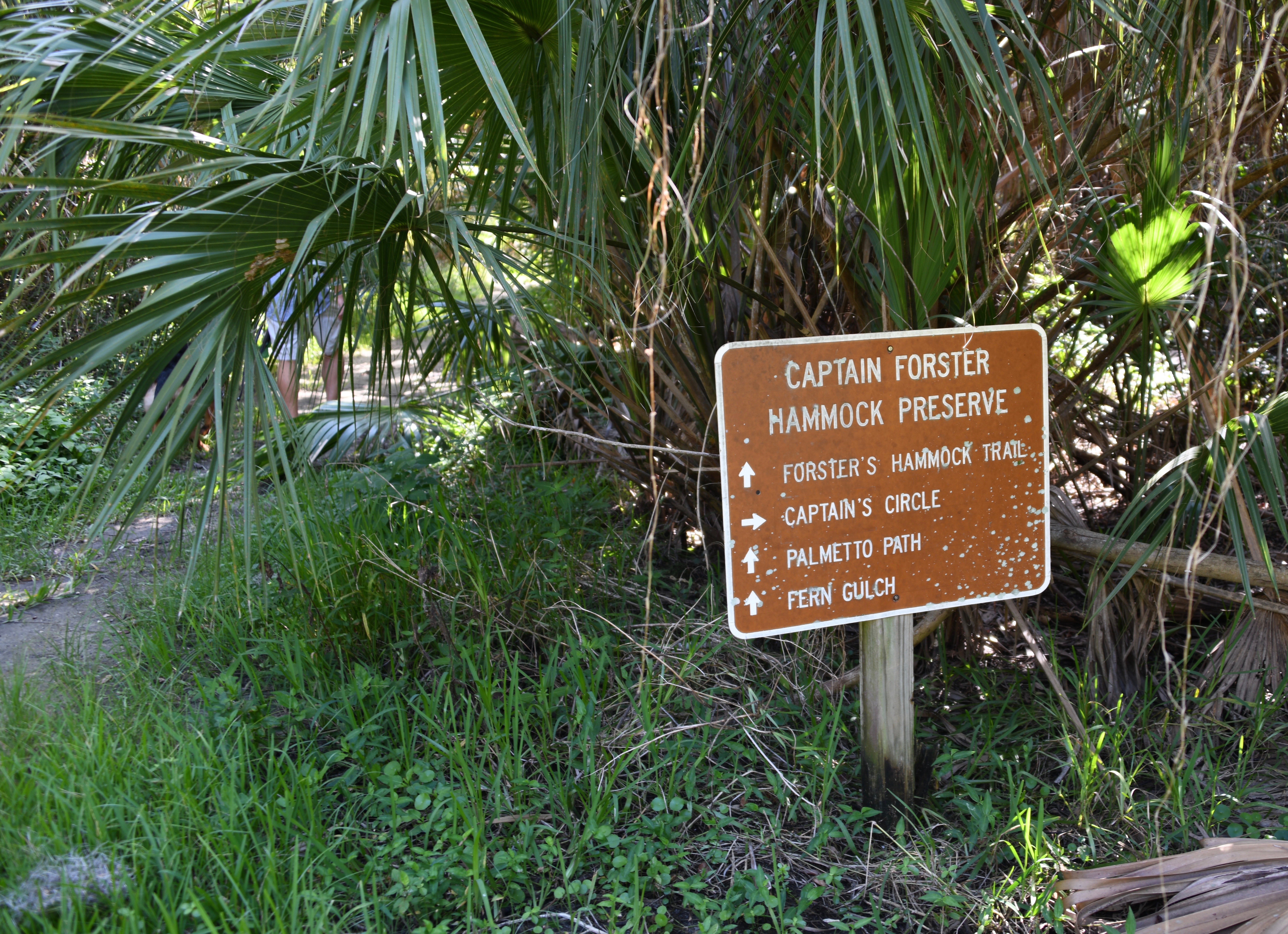 This 110-acre preserve is owned by Indian River County.

The Preserve contains one of the largest remaining coastal maritime hammocks on Orchid Island. The site was home to Captain Frank Forster, one of the first Orchid Island residents who homesteaded on the barrier island growing winter vegetables and fishing along the Indian River Lagoon.

Water and dry land were close together in the preserve, as is true in most of Florida… especially in the wet season.

The ubiquitous saw palmetto, Serenoa repens, with its fan-shaped fronds.

I almost didn’t post about this walk because this is a bird blog and we didn’t really see many birds that day, despite what we were promised. 153 species have been sighted at this eBird hotspot… by others.

But I decided to share the photos anyway because of the unique habitat. We found great examples of native plants that are recommended for planting in your Florida yard to support birds, like the beautiful American Beautyberry, Callicarpa americana.

From the Florida Wildflower Foundation…

American beautyberry is a woody shrub found in pinelands and hammocks throughout Florida. The plant’s foliage offers cover for small wildlife. Its flowers are a nectar source for butterflies and bees, while its dense clusters of berries provide food for birds and deer in late summer and fall. 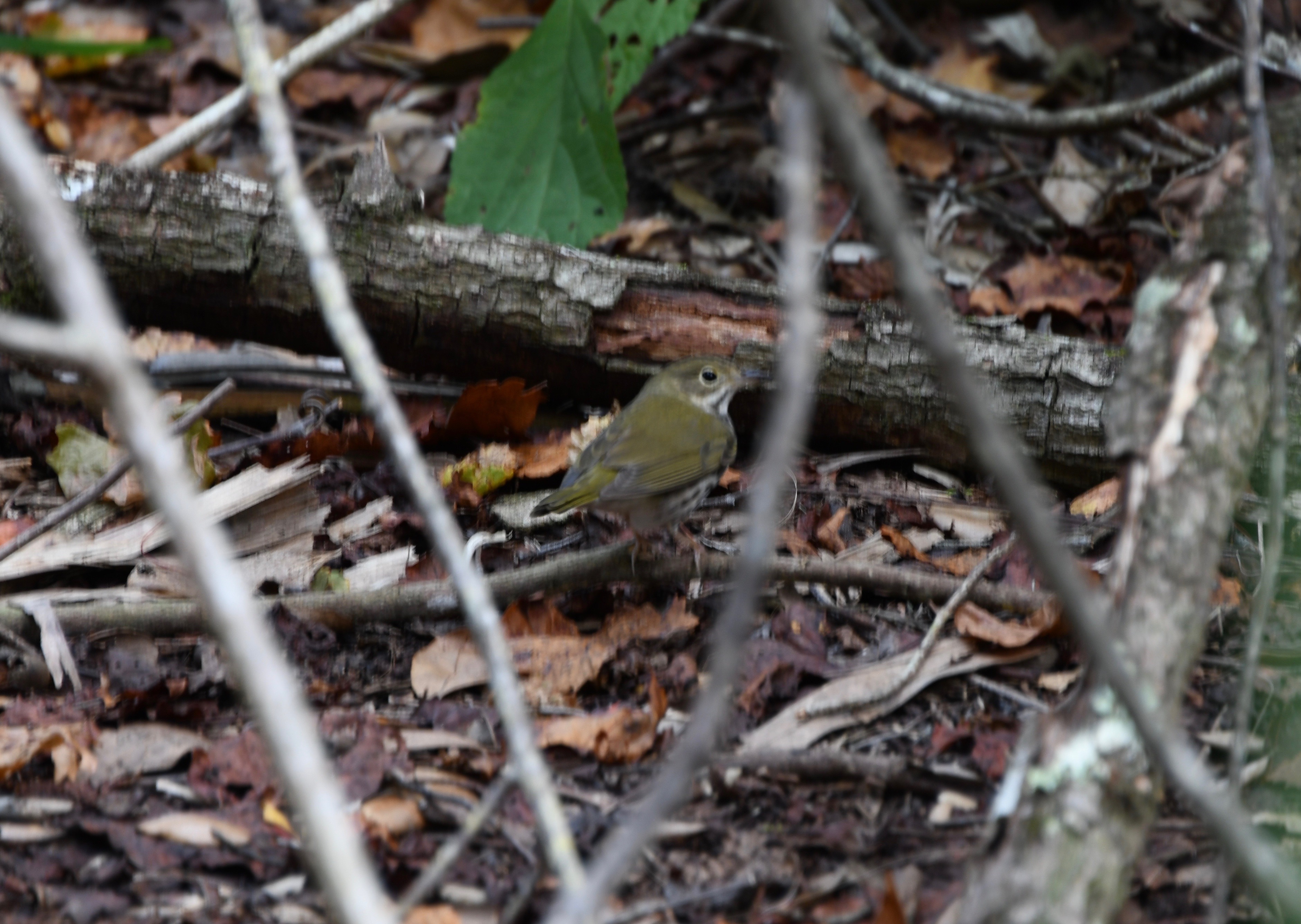 I also posted because of this fuzzy photo, which I would normally discard but it’s the only image of a new-to-me bird.  We spotted it oddly walking along – not hopping, like most little birds – in the leaf litter.

It’s an Ovenbird! (Confirmed on What’s This Bird, my favorite online double-check and bird identification crutch.)

The Ovenbird‘s rapid-fire teacher-teacher-teacher song rings out in summer hardwood forests from the Mid-Atlantic states to northeastern British Columbia. It’s so loud that it may come as a surprise to find this inconspicuous warbler strutting like a tiny chicken across the dim forest floor. Its olive-brown back and spotted breast are excellent disguise as it gleans invertebrates from the leaf litter. Its nest, a leaf-covered dome resembling an old-fashioned outdoor oven, gives the Ovenbird its name.

It wasn’t singing, just quietly foraging here in what may be its winter home. Are the snowbirds returning already?

The Ovenbird is species #216 for this blog.

John goes ahead. We were the only people on the trails for an hour that morning. Good heeling, Radar.

Partridge pea, a wildflower and legume that tolerates poor soil and feeds butterfly larvae. And provides pretty color along the trail, eye food for humans.

Berry time for Wild Coffee. But don’t get too excited about harvesting your own morning cuppa.

Shiny-leaved wild coffee, Psychotria nervosa, is in the same plant family as the stuff you find at Starbucks, but so are at least 5,999 other plants. There are something like 103 species of coffee worldwide, but only three are used to make a cup of Joe. This is not one of the three.

You can indeed make a beverage from wild coffee berries but it A) won’t taste good, B) won’t resemble coffee and C) will lack any caffeine kick. Might even give you a headache.

Almost the color of the wild coffee berries: a Northern Cardinal. We noticed a few males but couldn’t spot the females. Kinda the whole cardinal idea.

We were surprised to find quite a few citrus trees in one part of the woods. Probably leftover from some old groves, maybe even old Cap’n Forster’s?

I believe the historic Jungle Trail was a dirt road originally built to connect the citrus growers in the 1920s on Orchard Island/ Vero Beach.

John tasted one. He rated it “not that great.”

They’re common anywhere you might care to go, deep into the woods, around town and all points in between as long as there are bushes or thickets to provide cover. Florida even has its own subspecies, C. cardinalis ssp. floridanus, found throughout most of the state. 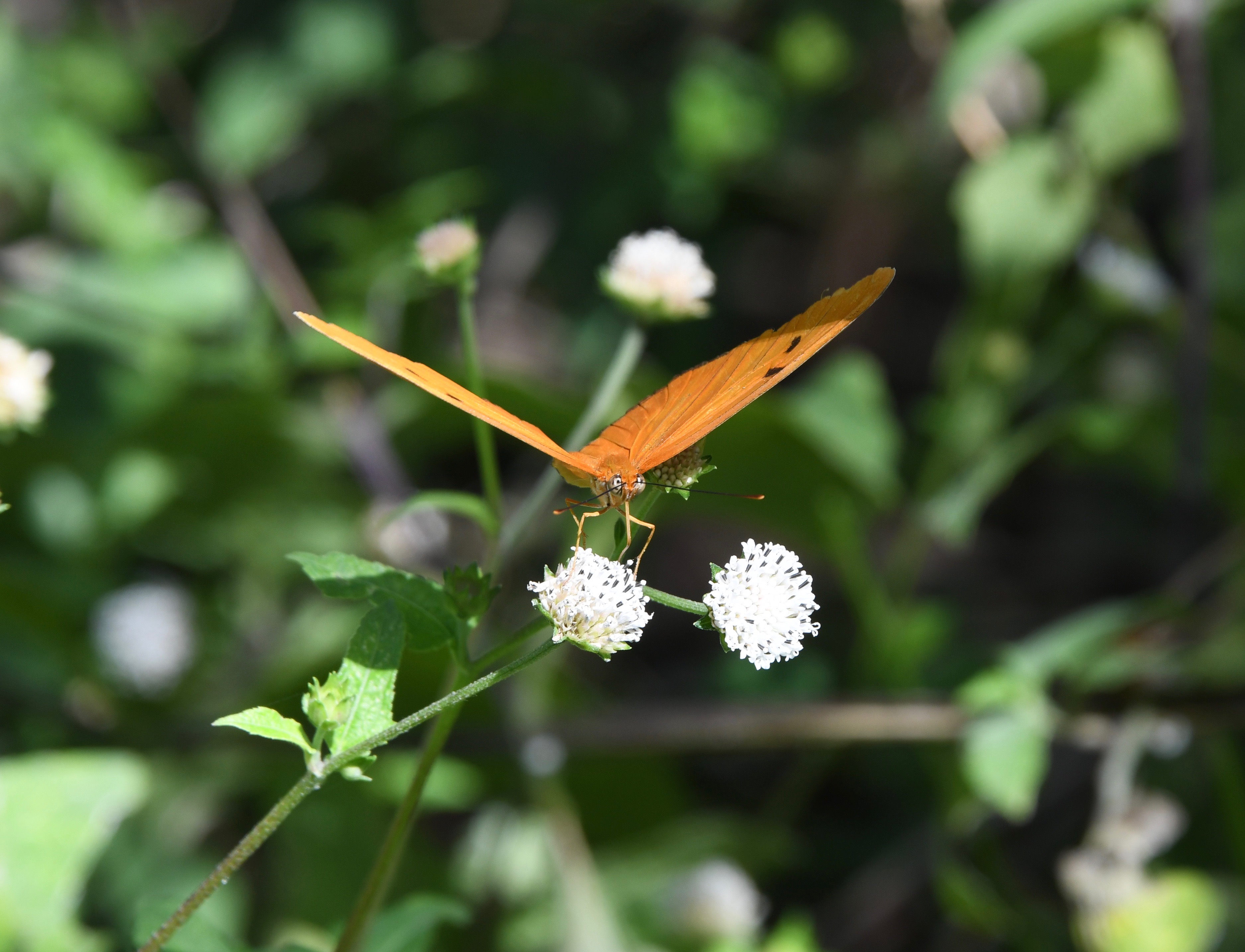 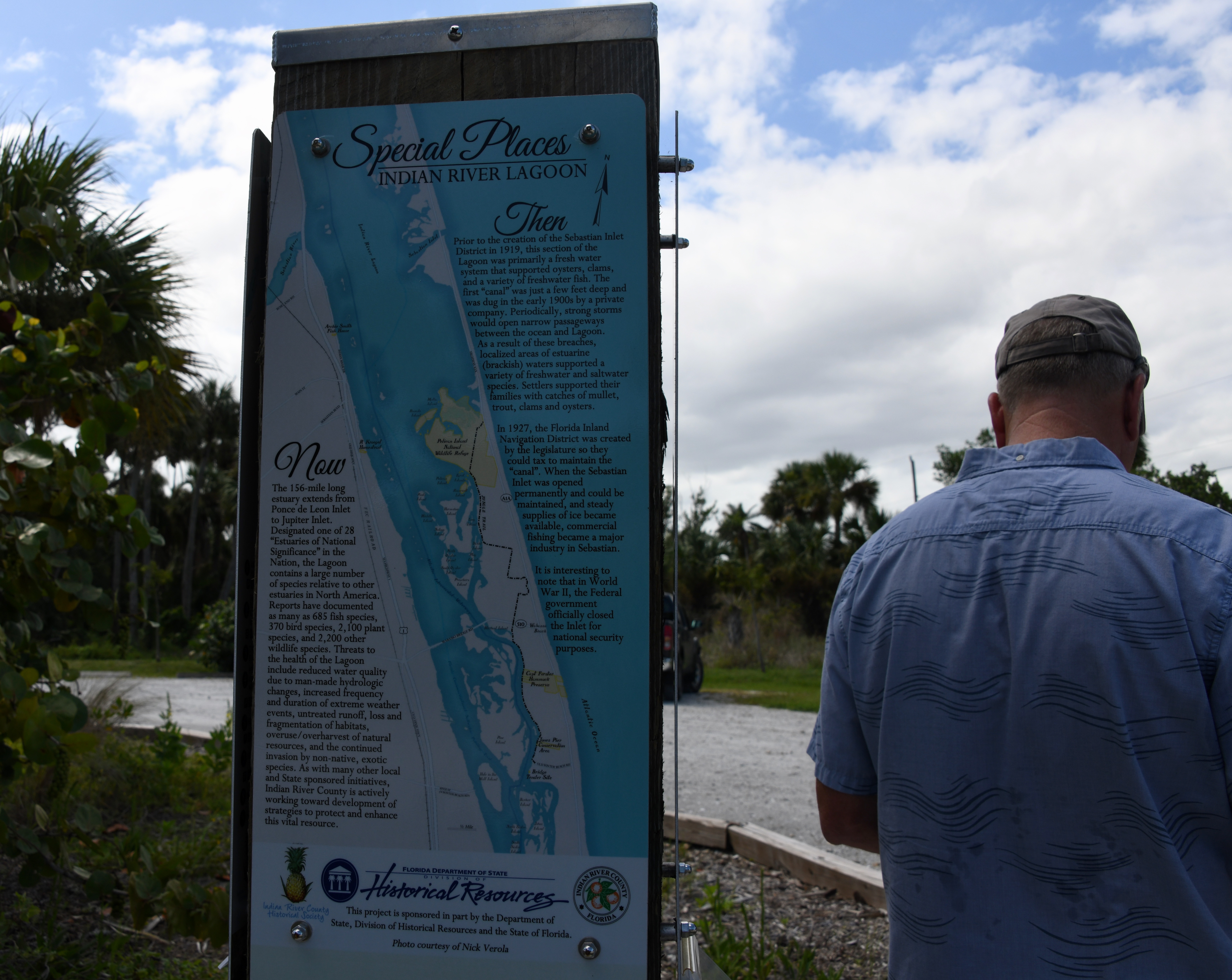 Here’s the online version, much more readable: Special Places on the Trail & Lagoon.

An hour north of home, we will return to explore along the Jungle Trail one day again soon.