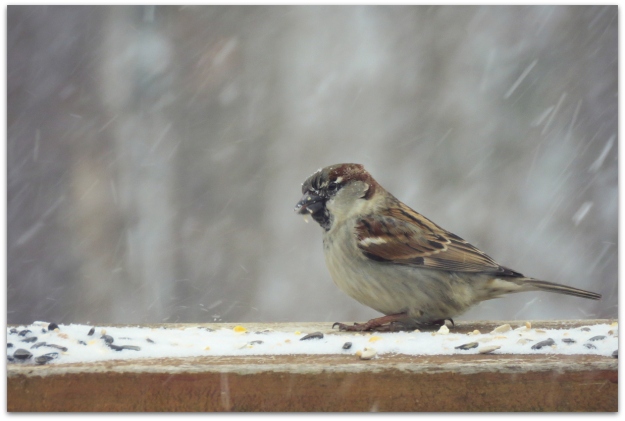 “Mom, there’s some kind of bird… like a sparrow… it’s fighting with the bluebirds. Check it out.”

I joined my daughter at the kitchen window.

“What? I think that’s a house sparrow! I’ve never seen one here before. That’s it. It’s all over. We’re the suburbs now.”

“That’s dramatic. It’s just a bird. And there’s only one of them.”

“One bird, but maybe the first bird. The explorer. They are coming to settle new territory. They are invasive and aggressive and compete with native birds like bluebirds for food and nest boxes. We don’t like them.”

You can find House Sparrows most places where there are houses (or other buildings), and few places where there aren’t. Along with two other introduced species, the European Starling and the Rock Pigeon, these are some of our most common birds. Their constant presence outside our doors makes them easy to overlook, and their tendency to displace native birds from nest boxes causes some people to resent them. But House Sparrows, with their capacity to live so intimately with us, are just beneficiaries of our own success.

I'm curious about birds and other living things. I live in Martin County, on the Treasure Coast of Florida.