Song sparrow. Lots of them around lately.

I spent much time looking for birds in my big backyard yesterday. It was sunny and 50 degrees.

Since I took down the feeders when we put our house on the market I have to go in search of the birds instead of waiting for them to come to me. I was rewarded yesterday with two new species for my count. 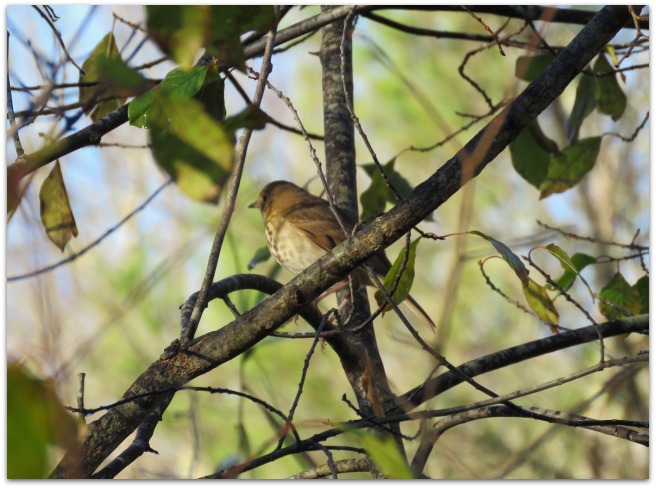 Hermit Thrush is Backyard Bird #62. I often see one (this one?) at a certain spot on the path into the woods. I was happy to finally get some photos, in the morning and then again in the mid-afternoon.

An unassuming bird with a lovely, melancholy song, the Hermit Thrush lurks in the understories of far northern forests in summer and is a frequent winter companion across much of the country. It forages on the forest floor by rummaging through leaf litter or seizing insects with its bill. The Hermit Thrush has a rich brown upper body and smudged spots on the breast, with a reddish tail that sets it apart from similar species in its genus.

This is the path into the woods where I see the Hermit Thrush. We hear its song in May and into the summer – one of the most beautiful songs you can imagine! Click here to LISTEN.

Radar has a nice morning walk in his own backyard. We will miss this place! Closing on November 29 and heading south to Florida shortly thereafter. We will take memories and photos with us. 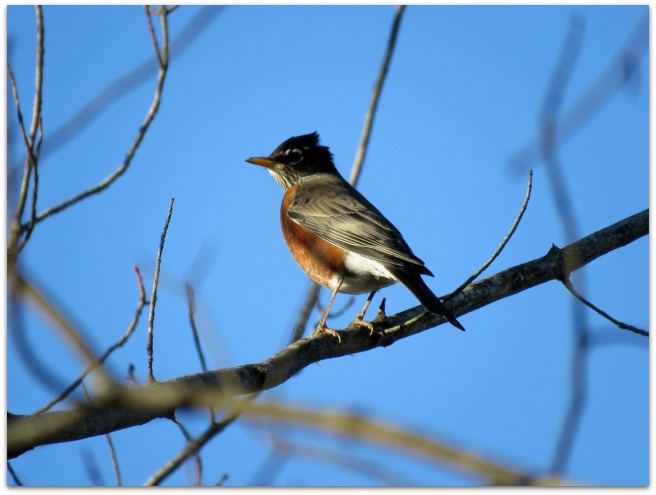 This American Robin looks like it just woke up.

Such a bold white eye ring. There were 20 or so robins a short distance from the path that heads into the red maple swamp. They were eating winterberries and whistling softly to themselves.

Robins are members of the Thrush family, just like the hermit thrush and my old friends the bluebirds.

They do good things with their poop…

Turdidae species spread the seeds of plants, contributing to the dispersal of many species and the recovery of ecosystems.

Many bats and birds rely heavily on fruits for their diet, including birds in the families Cotingidae, Columbidae, Trogonidae, Turdidae, and Rhamphastidae. While eating fruit, these animals swallow seeds and then later regurgitate them or pass them in their faeces. Such ornithochory has been a major mechanism of seed dispersal across ocean barriers. 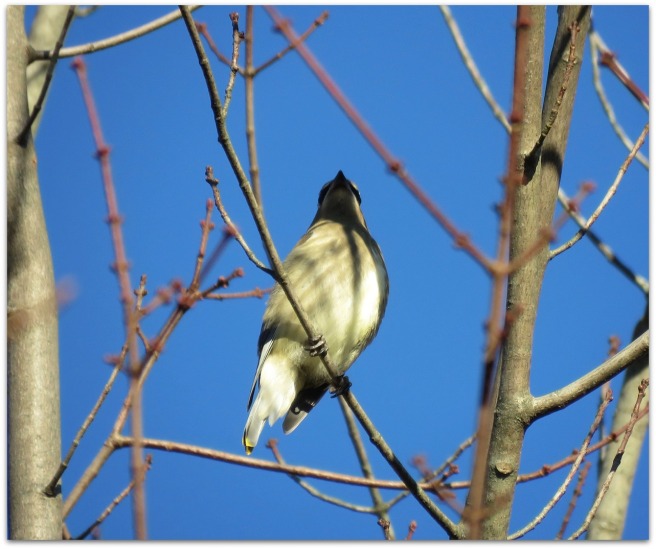 I spotted this Halloween-masked bird in a tree by the garden, near a big winterberry patch. It posed for a while, but my viewing angle was limited to the front of the bird from below.

Looked at the photos inside, checking for ID online, and decided it was a Cedar Waxwing. Backyard bird #63! 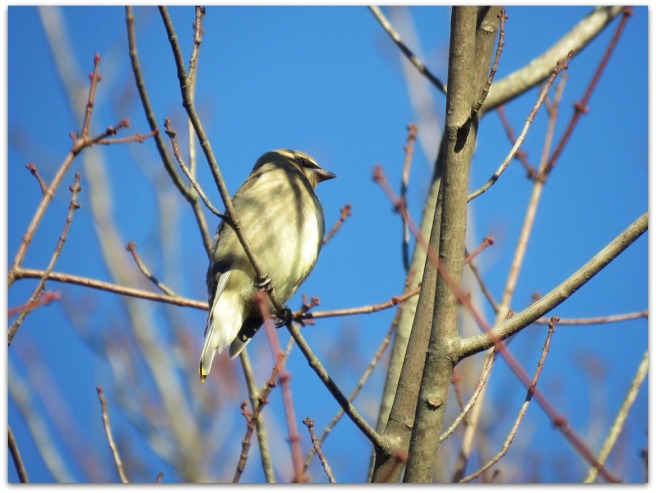 Size & Shape
The Cedar Waxwing is a medium-sized, sleek bird with a large head, short neck, and short, wide bill. Waxwings have a crest that often lies flat and droops over the back of the head. The wings are broad and pointed, like a starling’s. The tail is fairly short and square-tipped.

Color Pattern
Cedar Waxwings are pale brown on the head and chest fading to soft gray on the wings. The belly is pale yellow, and the tail is gray with a bright yellow tip. The face has a narrow black mask neatly outlined in white. The red waxy tips to the wing feathers are not always easy to see.

In the afternoon, I saw the Hermit Thrush again. Slightly better photo helped me be more sure of identification. As sure as I ever am, as an amateur bird watcher.

Hermit Thrush is one of five similar thrushes in the genus Catharus. Though they look alike, they’re also quite easy to tell apart using careful observation and accounting for your location and time of year. For instance, Hermit Thrush is the only one of these species that lives in the U.S. in winter. Swainson’s Thrush has a bolder, buffy eyering, more rounded spots on the breast, and no contrast between the color of the tail and the back. The Veery is entirely warm reddish-brown (again, no contrast between tail and back), and has weaker breast spotting. Wood Thrush has bold, black breast spots, so distinct that you can make out each individual spot. They have a bold white eyering and are warmer reddish-brown above, and are noticeably larger than Hermit Thrush. Gray-cheeked Thrush and Bicknell’s Thrush are uncommon in many areas, even within their far northern breeding range. They are much grayer overall, with an indistinct eyering and very plain face.

I will miss this bird’s beautiful song next spring!

In spring and summer, you’ll likely hear their mournful, flute-like song, oh, holy holy, ah, purity purity eeh, sweetly sweetly long before you see them. In winter they are frequently near berry-bearing plants.