I feel like I don’t take enough pictures of pelicans relative to how often I see them, which is pretty much daily because I live in Sewall’s Point, a peninsula connected by bridges to the mainland and a barrier island (Hutchinson).

So, here: a bounty of Pelicanus occidentalis.

Also known as a pod, a pouch, a scoop or a squadron of pelicans.

An unmistakable bird of coastal waters. Groups of Brown Pelicans fly low over the waves in single file, flapping and gliding in unison. Their feeding behavior is spectacular, as they plunge headlong into the water in pursuit of fish. The current abundance of this species in the United States represents a success story for conservationists, who succeeded in halting the use of DDT and other persistent pesticides here; as recently as the early 1970s, the Brown Pelican was seriously endangered.

We were stopping by the Fort Pierce Inlet at the north end of Hutchinson Island on a Sunday drive. It was too windy and rough to walk out on the jetty.

So we walked west along the south-side inlet shoreline to see what we could see.

The inlet connects the Indian River Lagoon with the Atlantic Ocean. There is no development at the ocean end of the inlet on either side. The north side is preserved as a state park.

Fishing was the main focus, of humans and birds alike.

Fish were feeding and breaking on the surface all over the place.

Here’s a Double-crested Cormorant, popping up from underwater fishing.

Forages mostly by hovering over water and plunging to catch prey just below surface. https://www.audubon.org/field-guide/bird/royal-tern

Brown Pelicans go even more “all in”.

Forages by diving from the air, from as high as 60′ above water, plunging into water headfirst and coming to surface with fish in bill. Tilts bill down to drain water out of pouch, then tosses head back to swallow. Will scavenge at times and will become tame, approaching fishermen for handouts.https://www.audubon.org/field-guide/bird/brown-pelican#

This guy had a fish on his line and was steadily working it closer and ready to gaff it when a pelican tried to steal it. He waved his gaffe and the pelican backed off, but not before trying to dive underwater and grab it.

View toward the north side jetty. Lots of birds, lots of fish.

And lots of wind.

Sometimes I look at pelicans and wonder how they stay in the air. I mean, their wings are really big, but so are their heads and bills. So big.

But they are master flyers. I like when they soar down low over the water to use what human aviators (like my husband) call “ground effect” to stay effortlessly aloft.

This juvenile Brown Pelican is banded. You can just barely see the band on the near leg, which is tucked up so nice and aerodynamically.

It was a good day for fishing, even for the humans.

I think it’s a Crevalle Jack. This man kept his fish.

I have eaten this kind of jack, very, very fresh, about 20 minutes after my husband caught it from the bridge near our house. He filleted it into chunks, I marinated it for about 10 minutes in lime juice, then cooked it in a cast iron pan with butter and Cajun seasonings. Served over white rice, it was delicious. It has dark red flesh like a tuna.

Snook (a fish I had never heard of until I moved here) are one of the most beloved fish for inshore Florida fishermen. But snook are not always in season (including right now): FWC regulations.

So gaze longingly at the snook and go catch a jack.

Fort Pierce Inlet is a nice destination, easily accessible, and a great place to walk and bird-watch.

I even spent a little time with a charming pair of Eurasian-collared Doves, fishing for love. 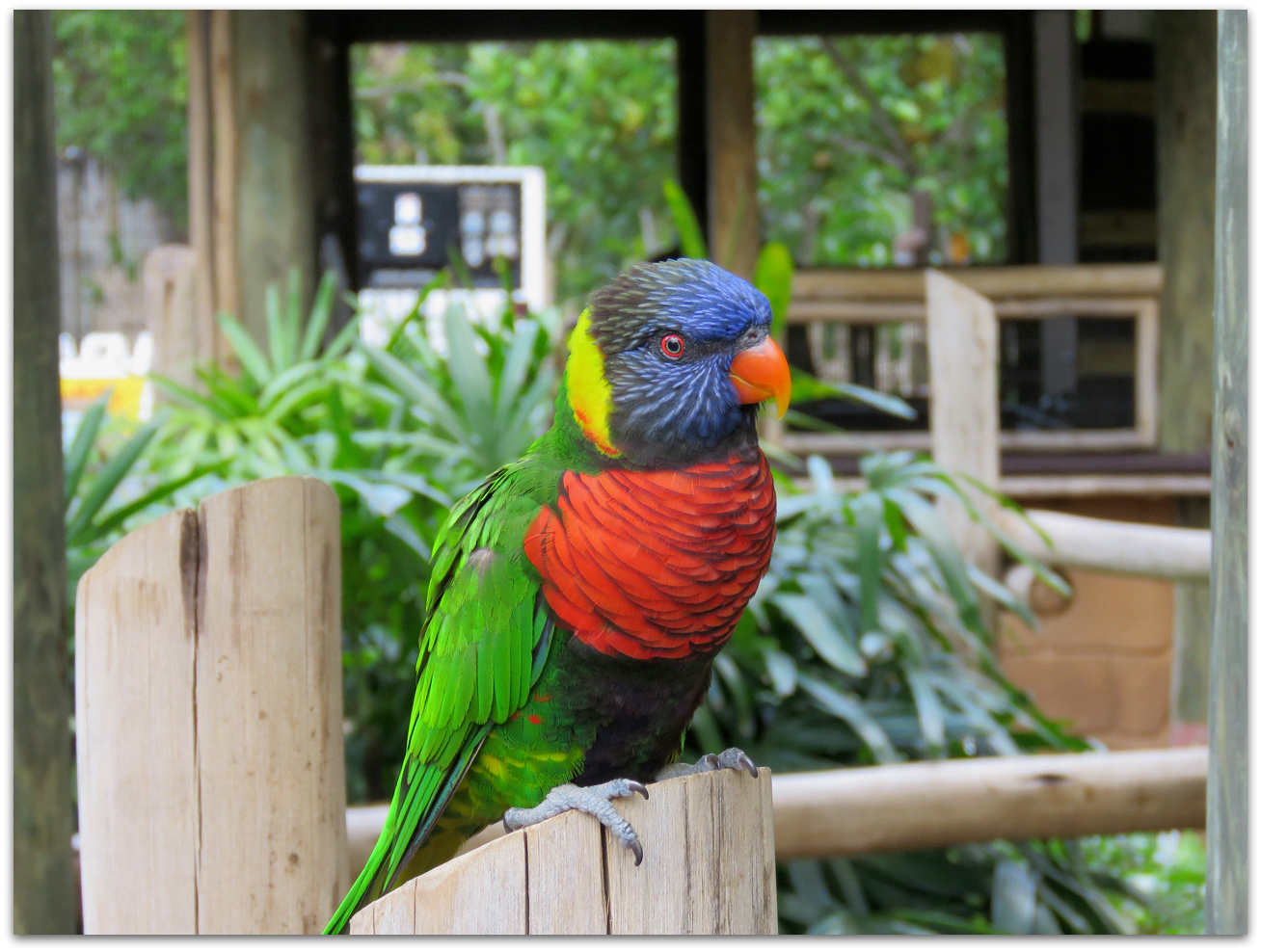 This bright little parrot is a Rainbow Lorikeet.

My husband and I visited the Palm Beach Zoo yesterday and our first stop was the Lorikeet Loft, a relatively new interactive exhibit where you can enter the aviary and feed the birds. 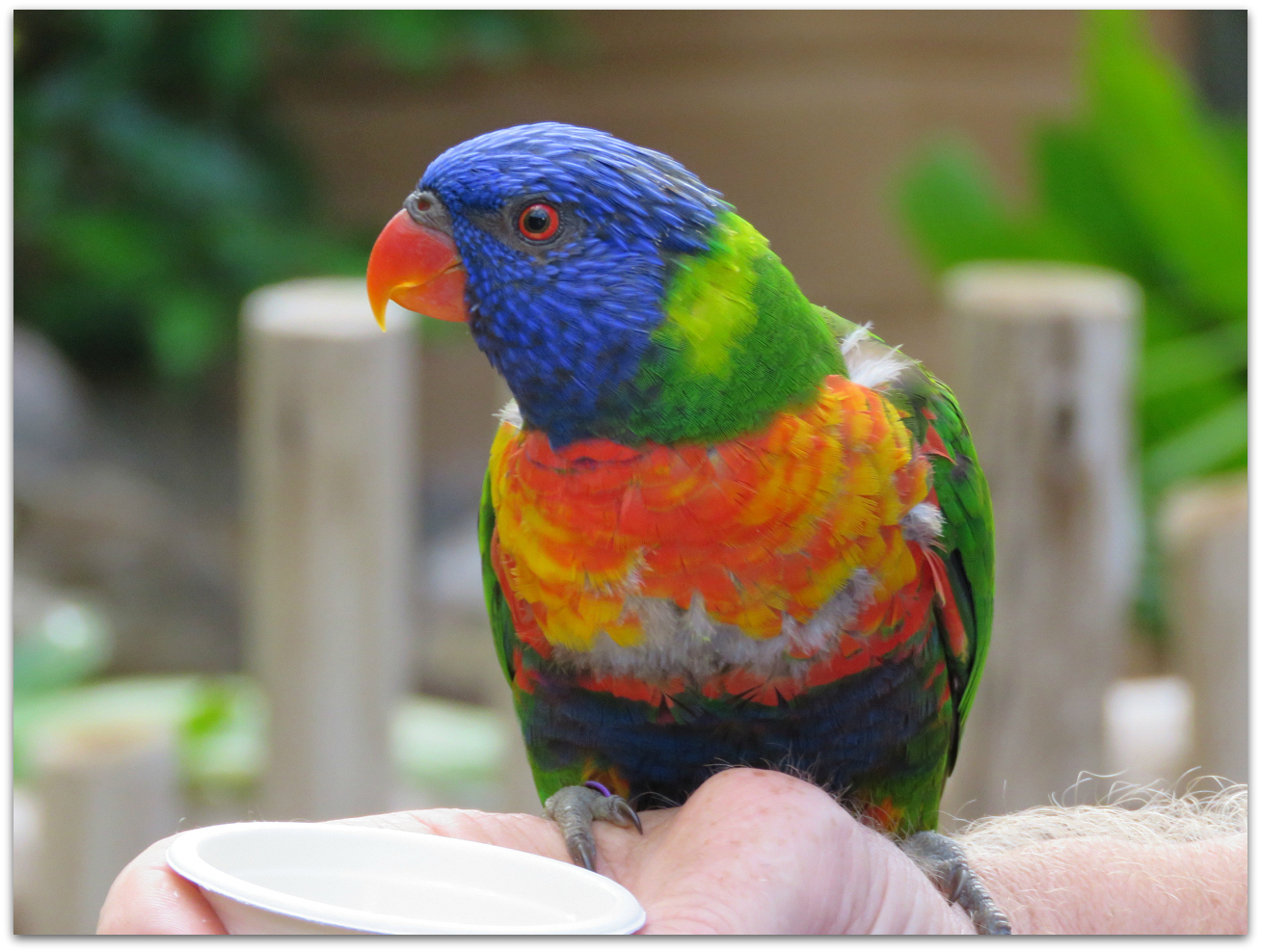 One cup of “nectar” (which is low-iron apple juice) is $2. Hold your arm out and a lorikeet, one of about 40 loose in the aviary, will perch and sip.

Is this great or what? Much better than just staring at animals on the other side of a fence.

Nestbox #8 with a friendly lorikeet coming to the front door.

I focused mostly on birds during our visit, unsurprisingly. Some, like this Tricolored Heron, were wild birds choosing to visit the zoo for its bounty of food resources.

This bird was fishing by dancing across the water and grabbing fleeing fish off the top.

It made several passes across the water like this while we watched.

But we didn’t have all day to watch a small native heron when there were other more exotic animals to see.

The Laughing Kookaburra is the largest member of the kingfisher family. I learned the Kookaburra song when I was in Girl Scouts a hundred years ago and so it’s a bird I “know” but have never seen.

I’d love to see one in the wild, but of course I’d have to go to Australia for that. 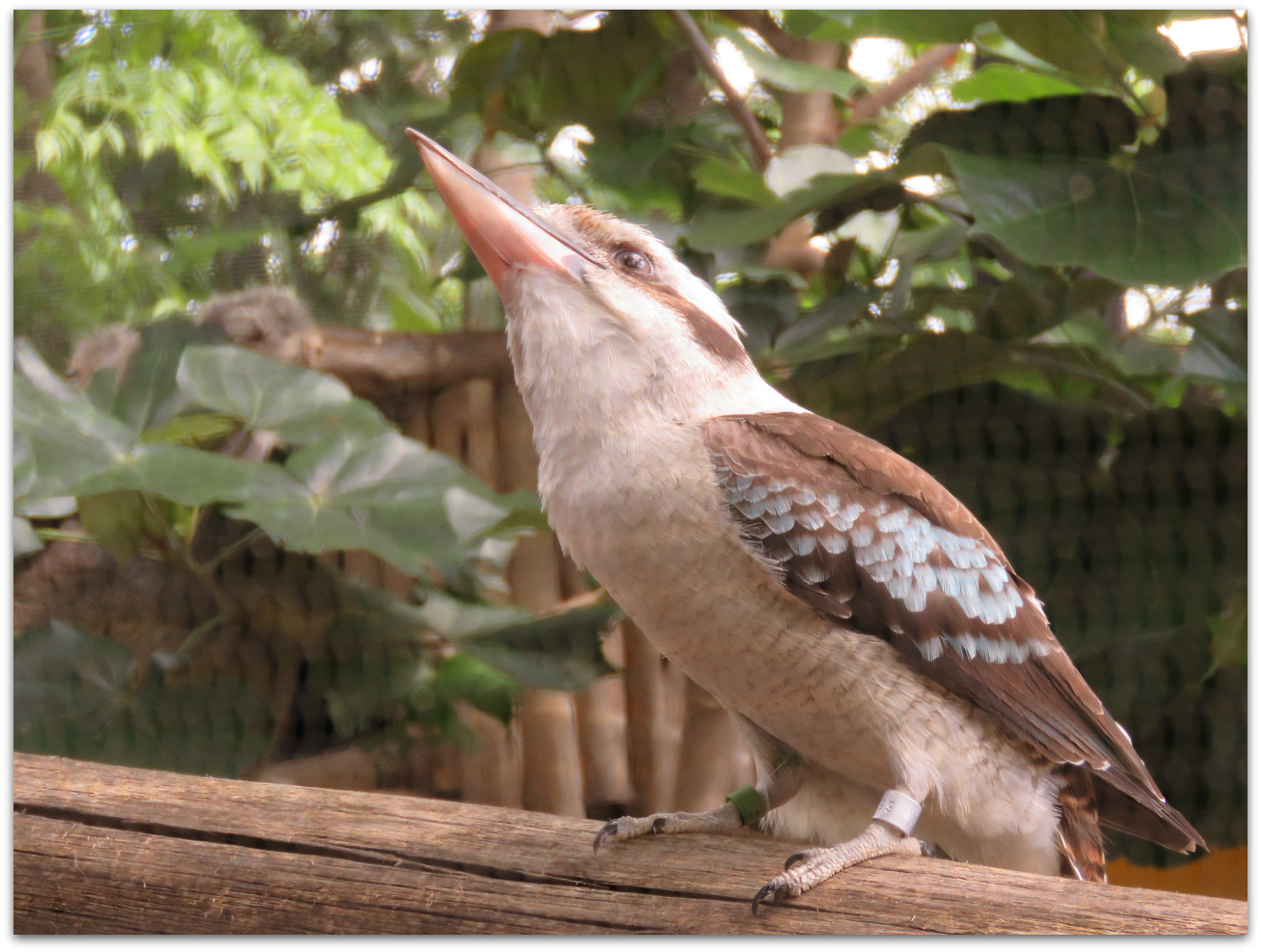 A predator of a wide variety of small animals, the laughing kookaburra typically waits perched on a branch until it sees an animal on the ground and then flies down and pounces on its prey. Its diet includes lizards, insects, worms, snakes and are known to take goldfish out of garden ponds.

Fennec foxes were eating lettuce when we stopped by their enclosure. 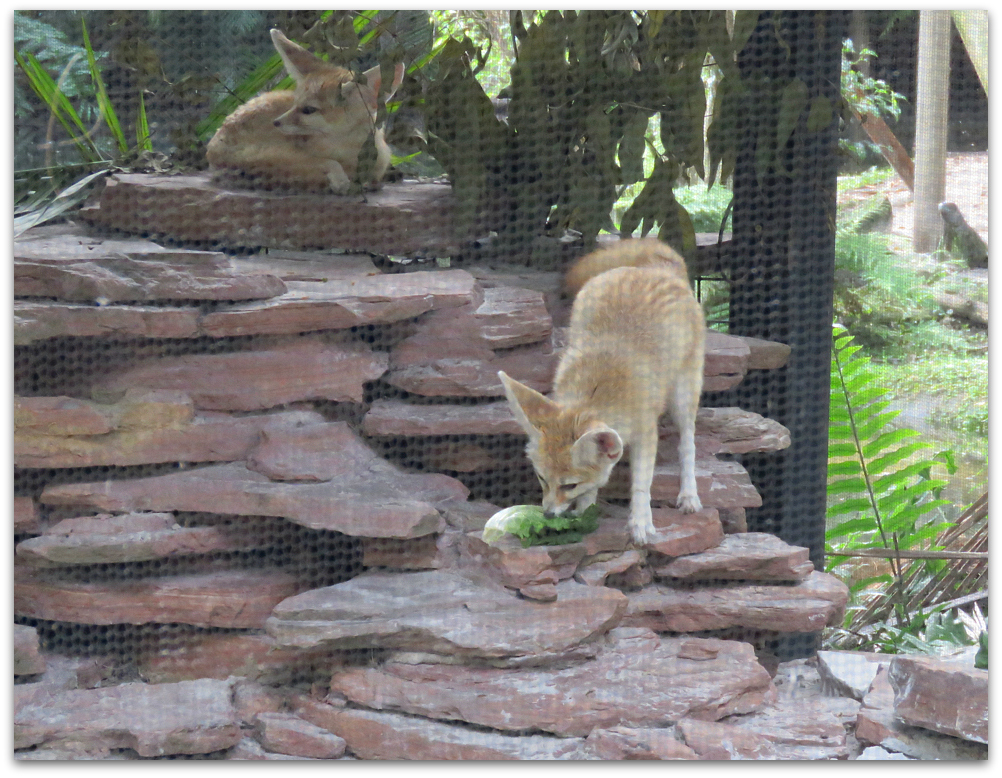 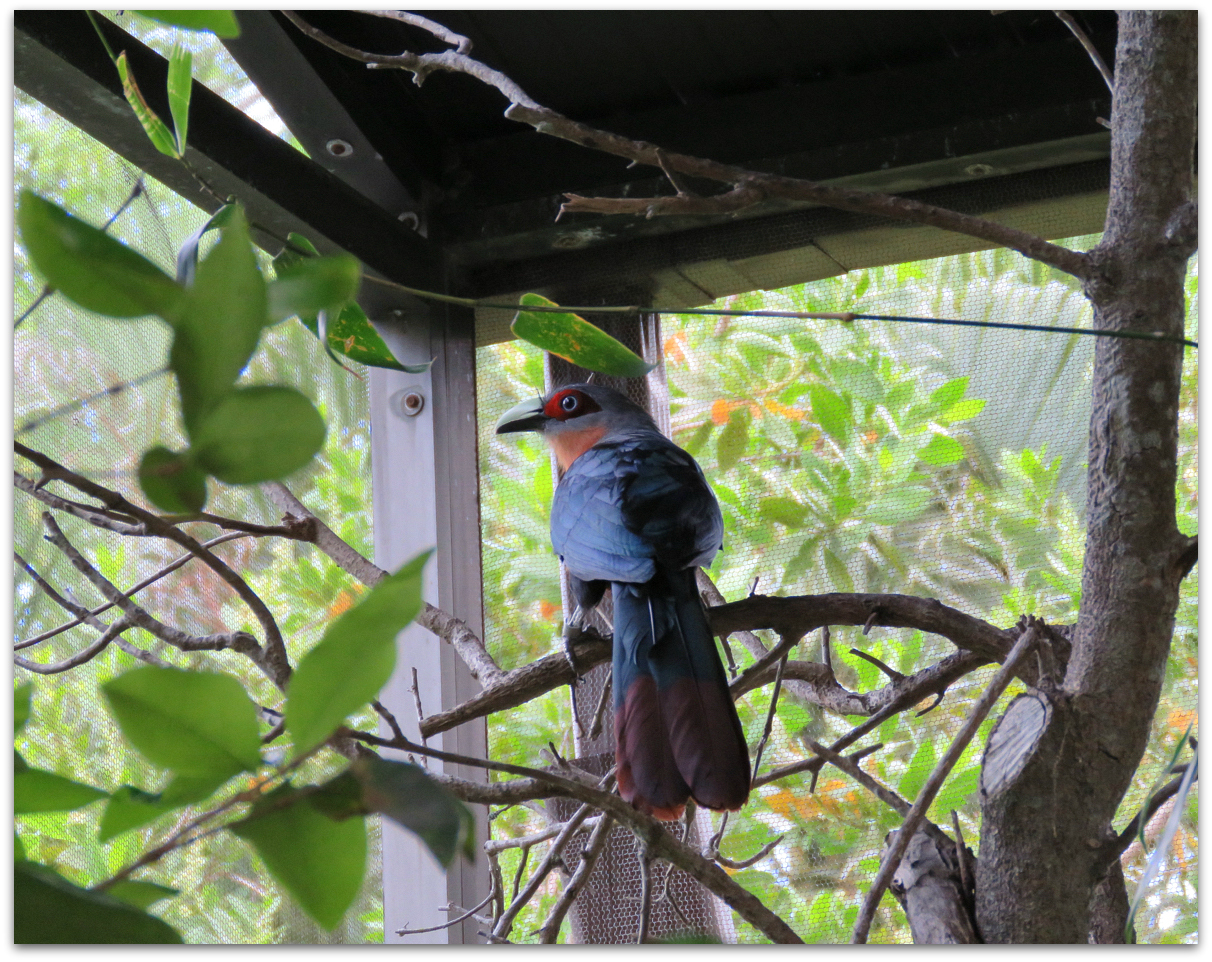 The Chestnut-breasted Malkoha is a large cuckoo from Southeast Asia.

It was inside an aviary you could enter… staring out rather forlornly, in my opinion.

Patagonian cavy, or mara. This seeming cross between a rabbit and a small donkey is actually more closely related to a guinea pig. But it also reminds me a little of my dog.

Another wild bird making itself at home in the zoo. 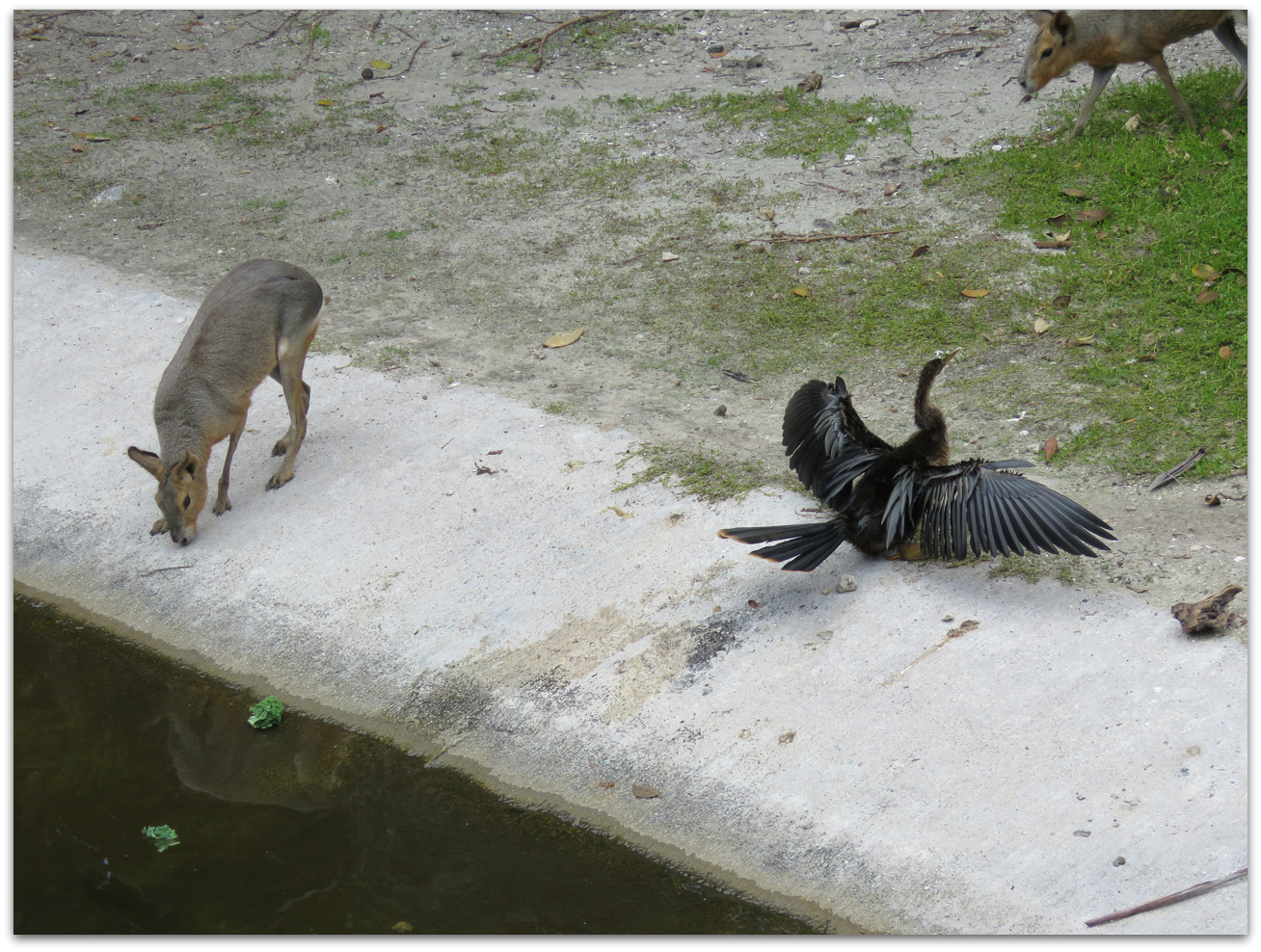 Anhinga hanging out near the maras. 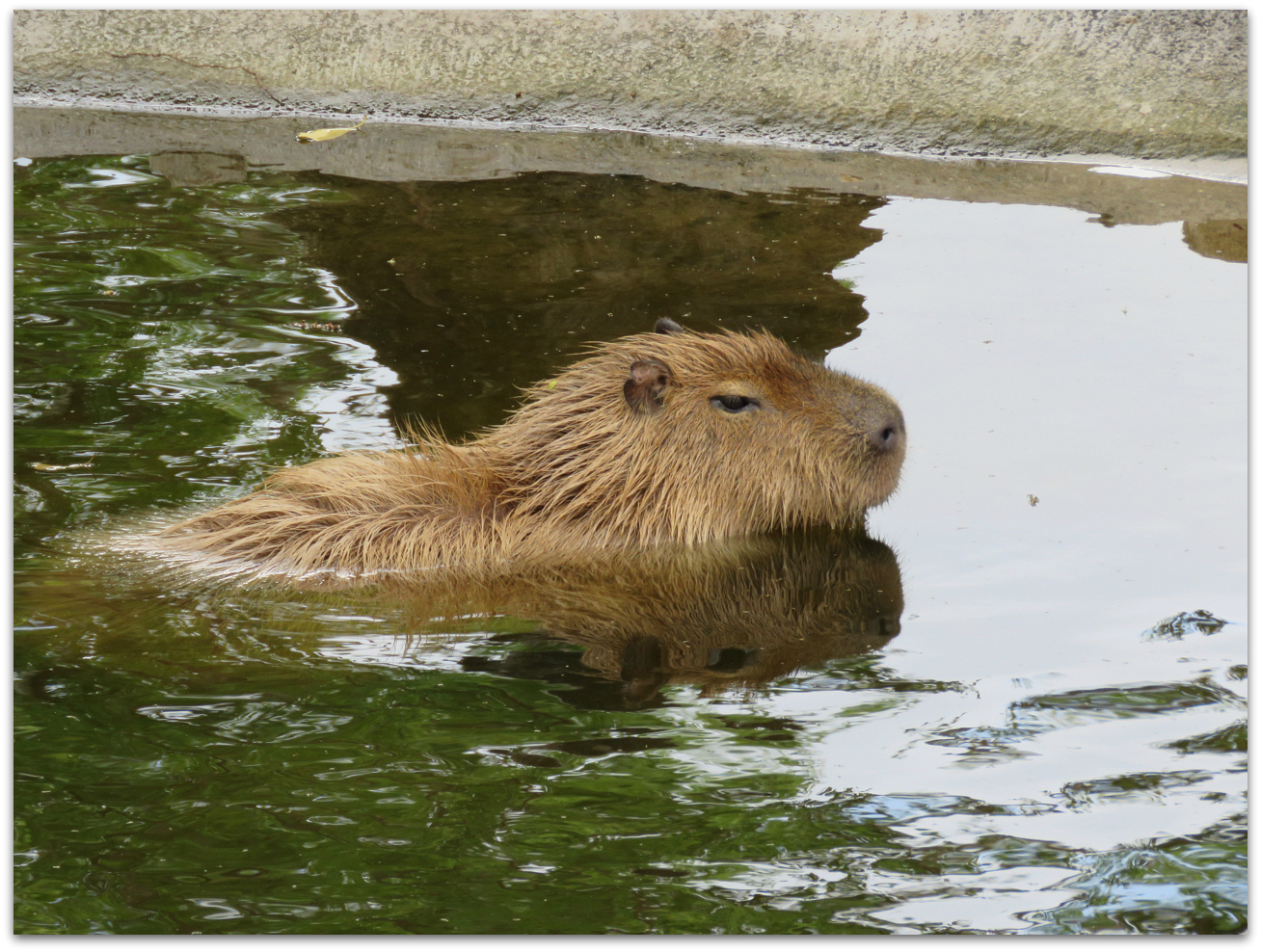 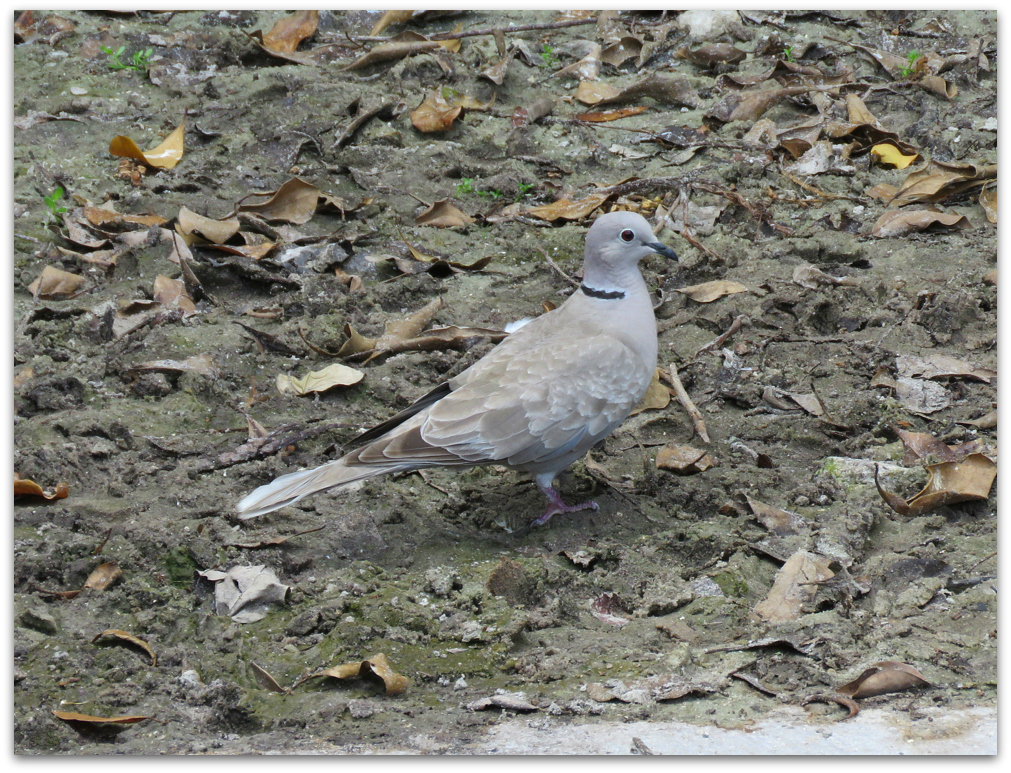 One of a number of Eurasian Collared-Doves we saw wandering around the zoo, representing the classic bird category “Pigeon at the Zoo.”

With a flash of white tail feathers and a flurry of dark-tipped wings, the Eurasian Collared-Dove settles onto phone wires and fence posts to give its rhythmic three-parted coo. This chunky relative of the Mourning Dove gets its name from the black half-collar at the nape of the neck. A few Eurasian Collared-Doves were introduced to the Bahamas in the 1970s. They made their way to Florida by the 1980s and then rapidly colonized most of North America.

I have been keeping an eye out for one of these doves. I was almost as excited to “get” it (with my camera) as I was to see any of the captive birds – which I’m not counting on my Photo Life List sidebar. Eurasian Collared-Dove is #174.