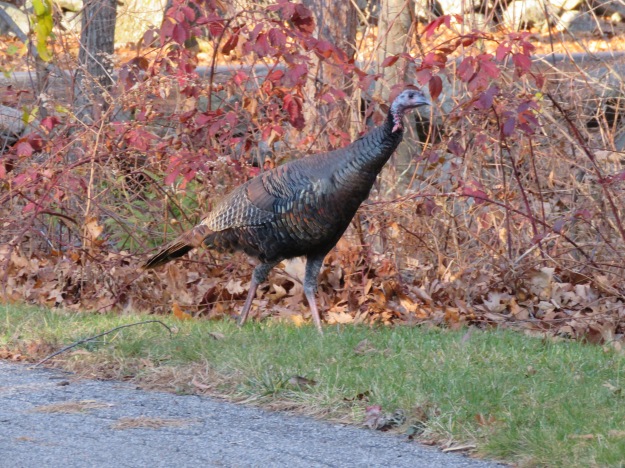 On Sunday, 16 wild turkeys walked through the backyard then the front yard then across and along the road, stopping traffic in that turkey way they have. 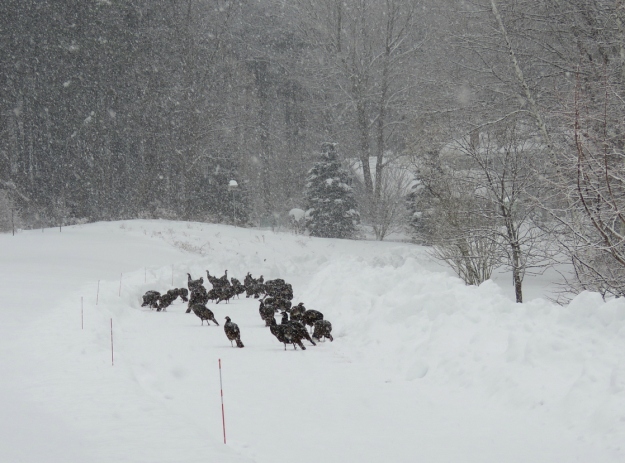 After more than two feet of snow from Winter Storm Juno Monday night through early Wednesday, then 3 or 4 more inches yesterday (Friday), I spotted a flock of wild turkeys in someone’s plowed driveway on Atlantic Ave. in North Hampton. 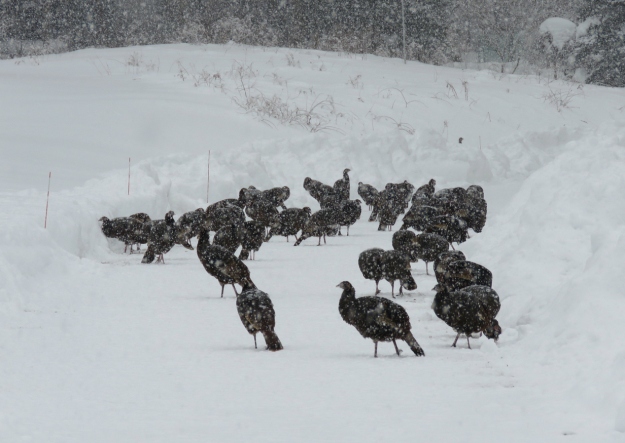 Where do they go, what do they eat, how do they get around in deep snow?

I submitted a report to the NH Fish and Game Winter Turkey Flock Survey.

This year’s New Hampshire winter wild turkey flock survey runs from January 1 through March 31. We need you to report flocks you see! Your observations will help Fish and Game biologists assess the impact of winter weather on our turkey population. Thank you for volunteering to help in this effort as a “citizen scientist.”

Those are some big birds.

We see more wild turkeys from late fall through the winter as they come out of the woods to look for easy food. And every year there seem to be more turkeys than the year before.

Presumably these are Eastern Wild Turkeys, a subspecies of Meleagris gallopavo (silvestris).

They number from 5.1 to 5.3 million birds. They were first named ‘forest turkey’ in 1817, and can grow up to 4 ft (1.2 m) tall. The upper tail coverts are tipped with chestnut brown. Males can reach 30 lb (14 kg) in weight. The eastern wild turkey is heavily hunted in the Eastern USA and is the most hunted wild turkey subspecies.

I have never tasted wild turkey, but I would like to someday… and compare the flavor to Meleagris butterballus.

Impressive wings. They look ungainly, too big to fly, but I have seen them take off high into the trees when my dog ran into the backyard. A bizarre sight.

Good book I recommend, with a chapter on wild turkeys: Nature Wars: The Incredible Story of How Wildlife Comebacks Turned Backyards into Battlegrounds, by Jim Sterba. From page 160…

… wild turkeys have had the same comeback history as geese and deer, and an even sharper trajectory, going from the edge of extinction in the 1920s to abundance a half century later. Then, just as quickly, they too went from novelties to nuisances. Here was one of the wiliest of wild creatures, one that would in the deep woods flee in an instant at the slightest movement by a hunter otherwise invisible in camouflage, suddenly turning up where people lived in the suburbs like an overgrown robin.

Here’s a review of the book by Russell Baker writing in the NY Times: Visitors.

During America’s first 250 years, early settlers cleared away some 250 million acres of forest. Yet the forest comes back fast. By the 1950s, one half to two thirds of the landscape was reforested. Most of us now “live in the woods,” Sterba writes. “We are essentially forest dwellers.” The new forests “grew back right under the noses of several generations of Americans. The regrowth began in such fits and starts that most people didn’t see it happening.”

Here is a Thanksgiving-appropriate cocktail from the Wild Turkey bourbon website. Tipple before the feast this Thursday, or save it for a cold night and a good book by the fire.