I signed in at the gate with the president of Audubon of Martin County bright and early yesterday morning and joined a few other cars driving around here and there on the narrow roads on top of the dikes in the 2600 acres under the care of the South Florida Water Management District.

Lakeside Ranch STA is located on the northeast side of Lake Okeechobee, about 50 minutes from my home in Sewall’s Point. 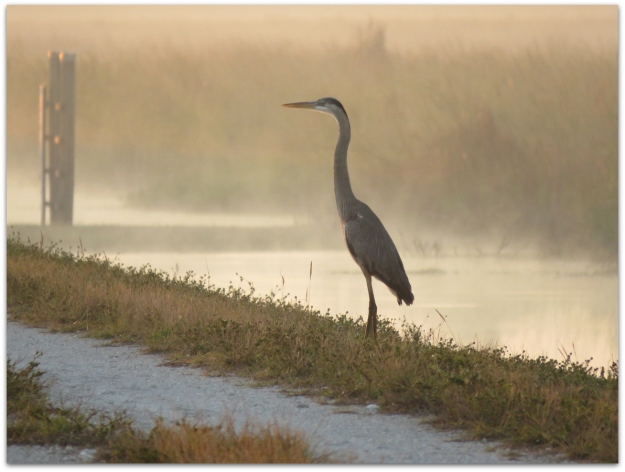 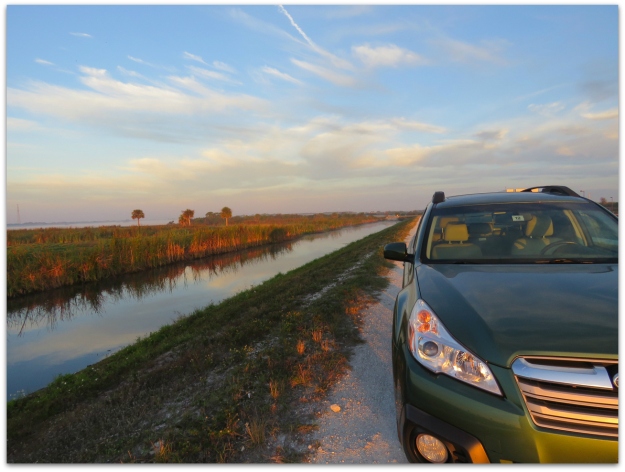 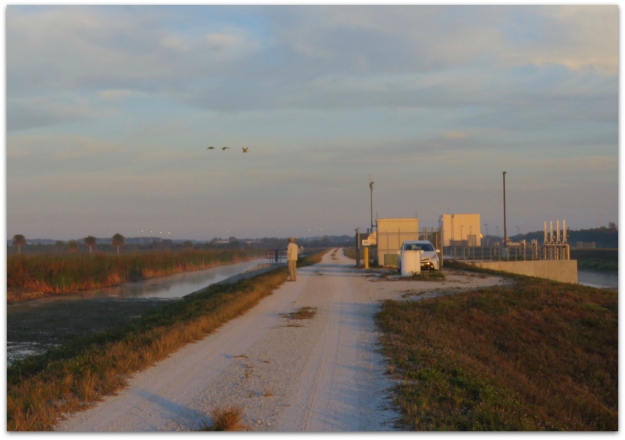 Anhinga keeping an eye on me.

Rotten photo but I’ve been seeing these birds in Florida and didn’t know what they were. Audubon president helped me ID it as a Palm Warbler. “Yellow butt? Brown capped head? Wagging tail?”

The rusty-capped Palm Warbler can be most easily recognized by the tail-wagging habit that shows off its yellow undertail. It breeds in bogs and winters primarily in the southern United States and Caribbean. 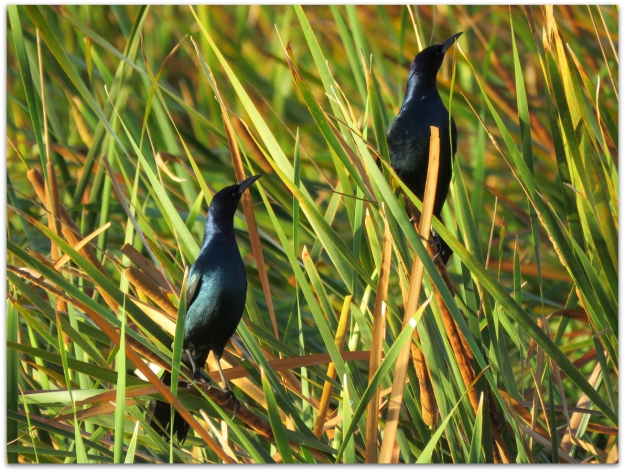 Voguing grackles. Or maybe males having a sing off? I am pretty sure these are Boat-tailed Grackles.

Boat-tailed Grackles are large, lanky songbirds with rounded crowns, long legs, and fairly long, pointed bills. Males have very long tails that make up almost half their body length and that they typically hold folded in a V-shape, like the keel of a boat.

Males are glossy black all over. Females are dark brown above and russet below, with a subtle face pattern made up of a pale eyebrow, dark cheek, and pale “mustache” stripe.

These scrappy blackbirds are supreme omnivores, feeding on everything from seeds and human food scraps to crustaceans scavenged from the shoreline.

Boat-tailed Grackles are a strictly coastal species through most of their range; however, they live across much of the Florida peninsula, often well away from the immediate coast. 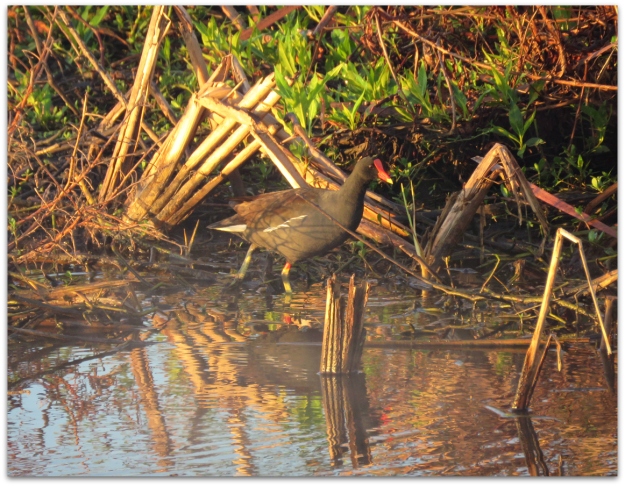 Or a wading bird? Neither… it’s a Common Gallinule!

The Common Gallinule inhabits marshes and ponds from Canada to Chile. Vocal and boldly marked with a brilliant red shield over the bill, the species can be quite conspicuous. It sometimes uses its long toes to walk atop floating vegetation. This species was formerly called the Common Moorhen and is closely related to moorhen species in the Old World. 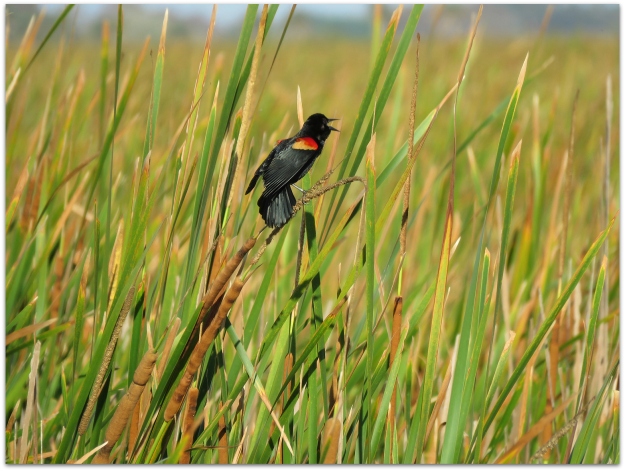 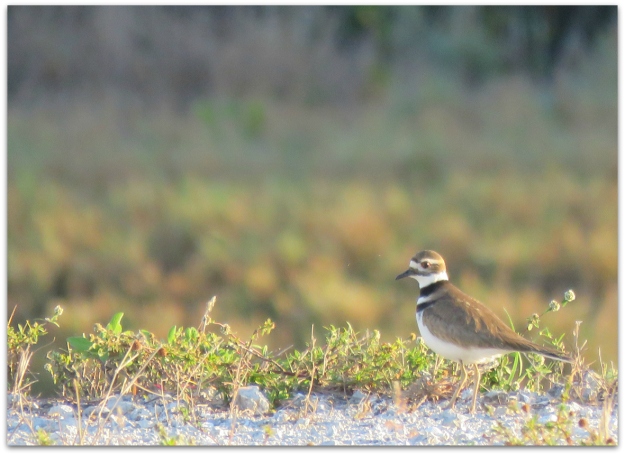 A shorebird you can see without going to the beach, Killdeer are graceful plovers common to lawns, golf courses, athletic fields, and parking lots. These tawny birds run across the ground in spurts, stopping with a jolt every so often to check their progress, or to see if they’ve startled up any insect prey. Their voice, a far-carrying, excited kill-deer, is a common sound even after dark, often given in flight as the bird circles overhead on slender wings.

Let these dead trees be decorated with Anhingas!

The sweet, lazy whistles of Eastern Meadowlarks waft over summer grasslands and farms in eastern North America. The birds themselves sing from fenceposts and telephone lines or stalk through the grasses, probing the ground for insects with their long, sharp bills. On the ground, their brown-and-black dappled upperparts camouflage the birds among dirt clods and dry grasses. But up on perches, they reveal bright-yellow underparts and a striking black chevron across the chest. 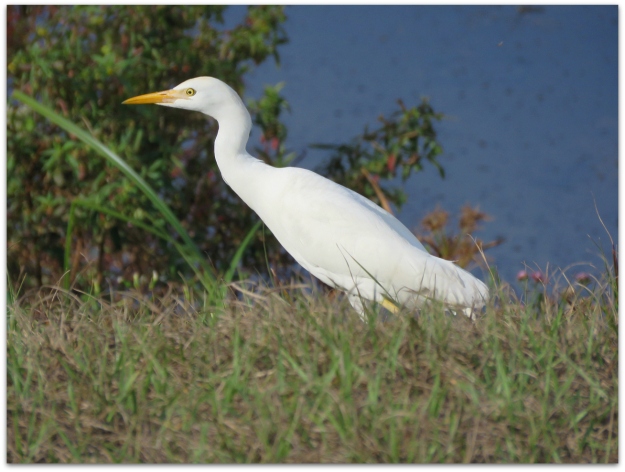 Cattle Egret, that chunky little white egret found near or away from water. Often seen (by me) on top of shrubs planted in medians. 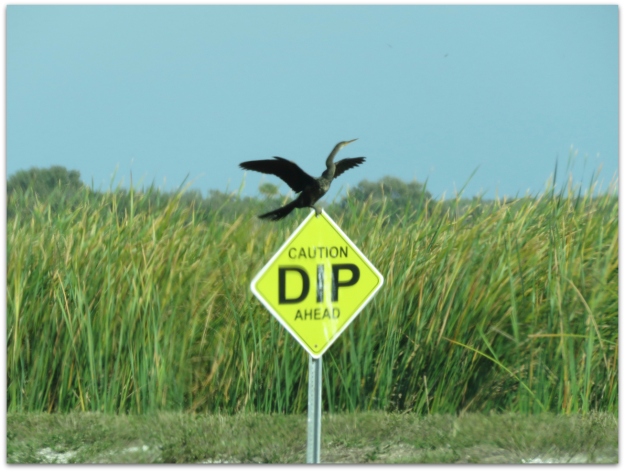 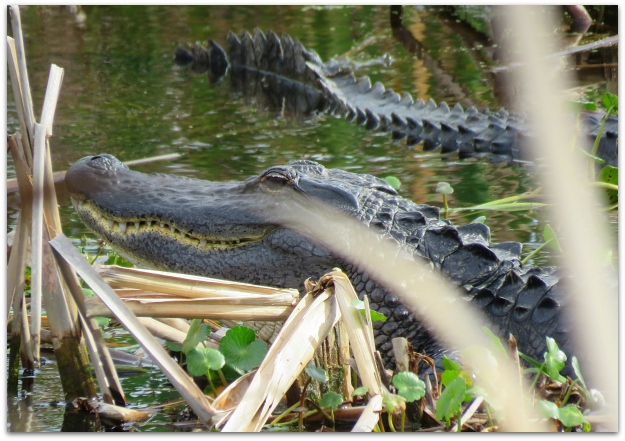 There were five gators in this one spot. 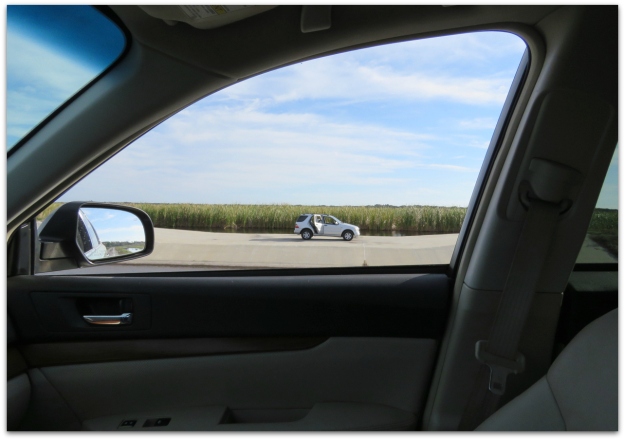 View across a small canal to another birdwatcher’s car. 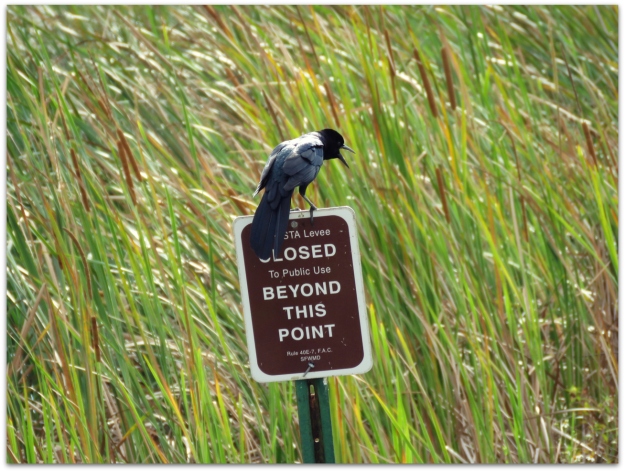 Cattle and cattle egrets, just past the edge of the STA. 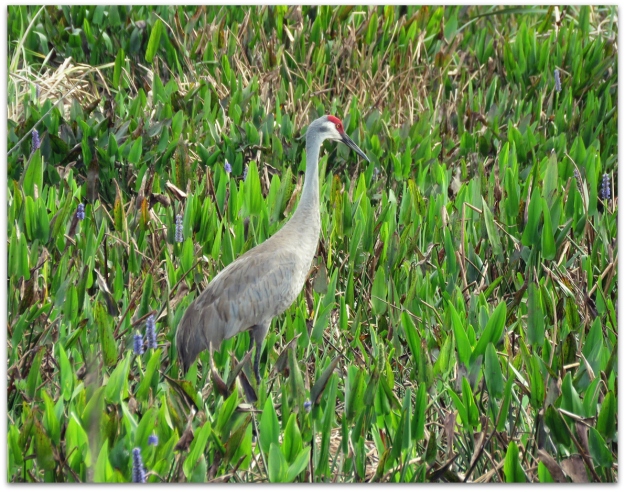 Sandhill Crane, maybe on top of the beginnings of a nest.

A dark wading bird with a long, down-curved bill. Although the Glossy Ibis in North America lives primarily along the Atlantic Coast, it also can be found in Europe, Africa, Asia, and Australia. 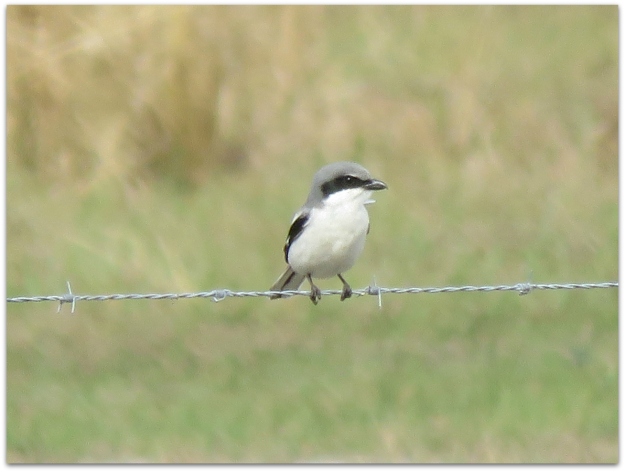 Blurry pic because it was far away, but with important identifying features. I described this bird to the Audubon president when I got back to the gate and he said it was a Loggerhead Shrike. Another new bird!

The Loggerhead Shrike is a songbird with a raptor’s habits. A denizen of grasslands and other open habitats throughout much of North America, this masked black, white, and gray predator hunts from utility poles, fence posts and other conspicuous perches, preying on insects, birds, lizards, and small mammals. Lacking a raptor’s talons, Loggerhead Shrikes skewer their kills on thorns or barbed wire or wedge them into tight places for easy eating. Their numbers have dropped sharply in the last half-century.

At the end of January, I attended a couple of days of a local Audubon Field Academy. I am signed up next to do a day with raptors at a local wildlife rehab center, then a unit on migration at the end of March. More field trips are on the calendar too.

Meanwhile, back to fixing up this little old Florida concrete-block-and-stucco house. I am painting the last of the three bedrooms today before the wood floor installation guys arrive tomorrow.