Great Curassow pair on the grounds of the Volcano Lodge, Hotel & Thermal Experience near Arenal Volcano in Costa Rica.

Very large game bird of tropical forest, eliminated from most areas by hunting. Rarely found except in protected parks or very remote areas. Usually seen on the forest floor, singly or in small groups, but also feeds in trees. Males often sing from high in canopy: song is a very low-pitched, almost subliminal, booming sound. Not likely to be confused if seen well. Both sexes have distinctive curly crest. Female plumage is variable: some have bold barring, others have darker and mostly unbarred plumage.

Finally got photos of the Orange-chinned Parakeet. I keep seeing them fly over in small flocks.

Small, fast-flying parakeet of humid lowlands on the Pacific slope. Favors forest patches and fairly open country with hedges and tall trees, including towns and villages. Usually seen in pairs or small flocks; associates readily at fruiting and flowering trees with much larger and longer-tailed Orange-fronted Parakeet. Flight is distinctively bounding, not direct like larger parakeets. Plumage is green overall with bronzy shoulders; small orange chin patch is very hard to see. 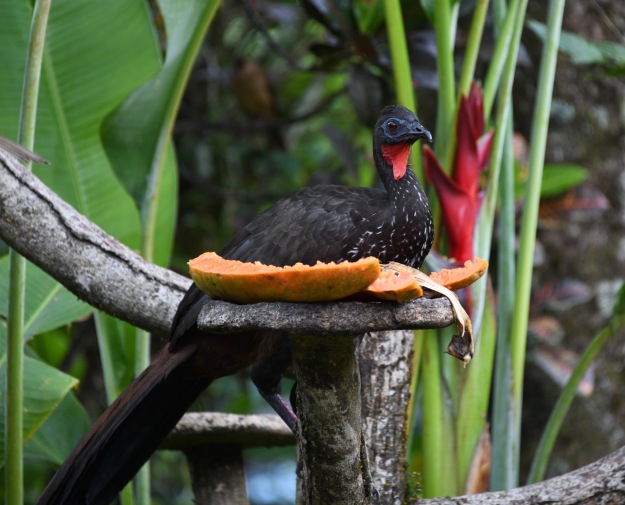 The feeding station was very active this morning. Crested Guan pauses for his portrait.

The Crimson-collared Tanager is beautiful and easily identified black and red bird with a strikingly pale bill that is endemic to Middle America, where it is found from southeast Mexico south to Panama. 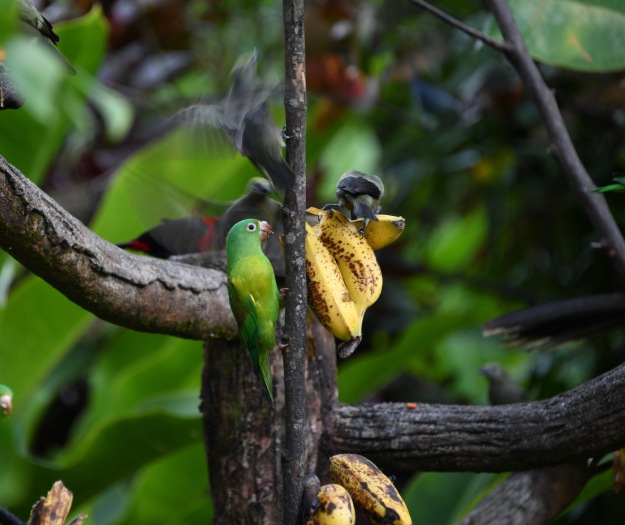 So many species in one spot. 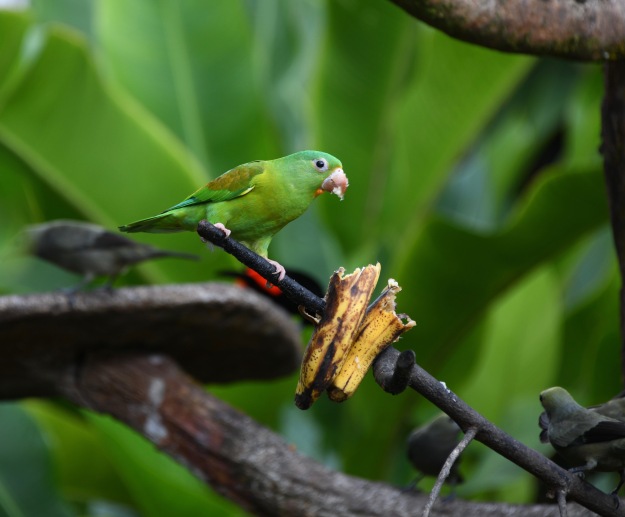 Yellow-throated Euphonia on the scene.

Montezuma Oropendola is a large member of the blackbird and oriole family. We have seen a lot of them here in the Arenal region. 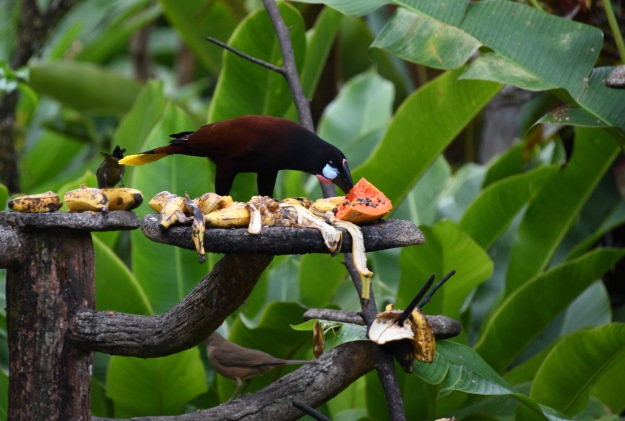 Crested Guan has a nice mohawk.

Tiny crest – we have seen these little sparrows all around.

The Rufous-collard Sparrow is a ubiquitous resident of lowland and montane scrub from Mexico south to Tierra del Fuego.  Rufous-collared Sparrows have a gray head with two broad black crown stripes and a blackish line through the eye, prominent rufous collar, rufescent upperparts streaked black and white underparts with black patches on either side of the chest.  The sparrows are very tolerant to human presence, and are a common sight in settlements across South America.  Rufous-collard Sparrows are often encountered hopping on open ground as they forage for seeds and insects or singing from a  prominent perch on a shrub or rock. 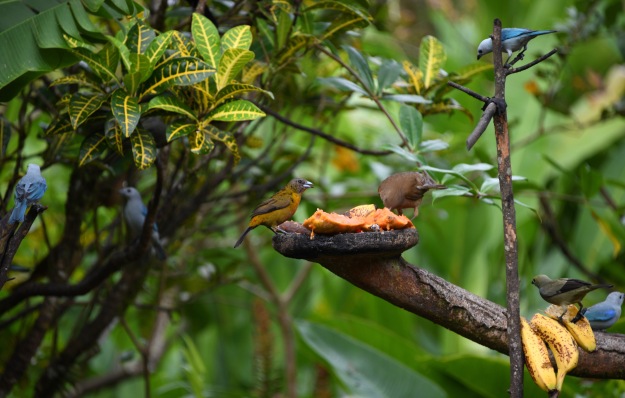 The Scarlet-rumped female among the breakfast crowd.

I tinkered with camera settings and I’m happy with today’s photos. Still a lot to learn!

Greyish Saltator and a couple of Palm Tanagers at the feeding station near our breakfast area at the lodge yesterday morning. Our table was closest to the birds.

The greyish saltator (Saltator coerulescens) is a seed-eating songbird that is widespread in the tropical Americas. Traditionally placed in the cardinal family (Cardinalidae), the saltators actually seem to be closer to the tanagers (Thraupidae). In El Salvador, it is well known as dichosofui after the “elaborate” version of its call, which sounds like a drawn-out ¡dichoso fui!, Spanish for “I was happy!”

Blue-gray Tanager looks bluer next to its Palm Tanager relatives.

The Palm Tanager is one of the most widespread and familiar birds of humid lowland forests of the neotropics, from Nicaragua south to southern Brazil. The Palm Tanager is similar in many ways to the Blue-gray Tanager (Thraupis episcopus), although the Palm Tanager is less likely to colonize urban centers, as do Blue-gray Tanagers. Palm Tanagers are common at forest borders, but also occur in the canopy of the interior of forest. As the name suggests, Palm Tanagersoften are associated with palm trees, but by no means are they restricted to living in palms. Their diet is roughly equally balanced between fruit and arthropods. 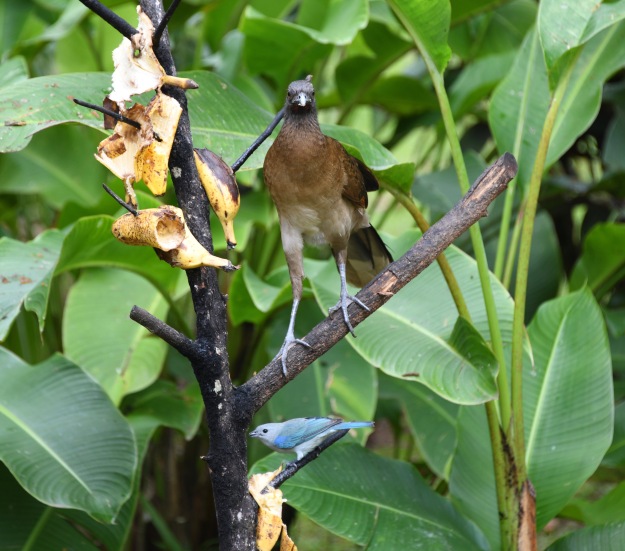 This is a Gray-headed Chachalaca, a member of the guan family of “jungle turkey” birds. 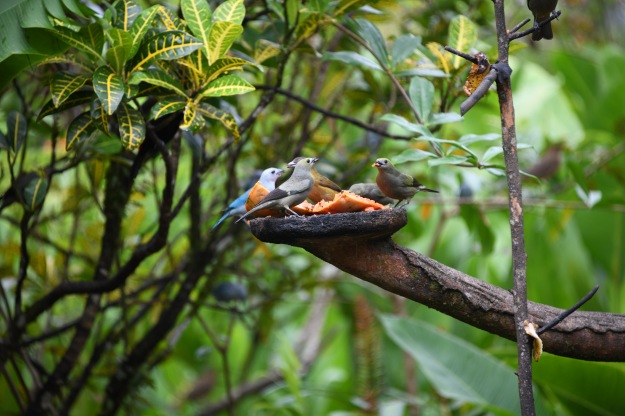 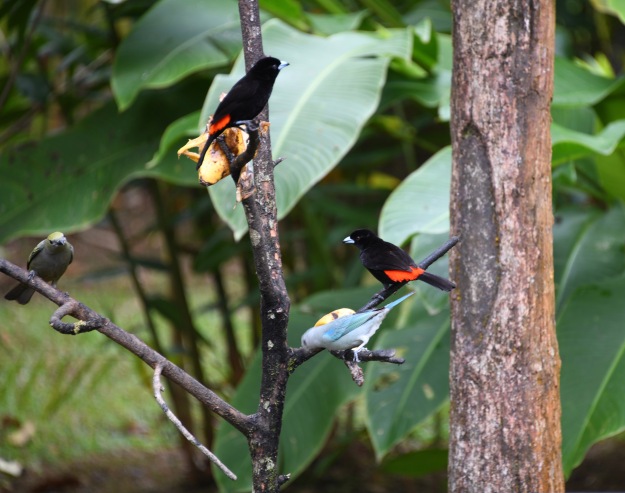 Scarlet-rumped Tanagers appear on the scene. 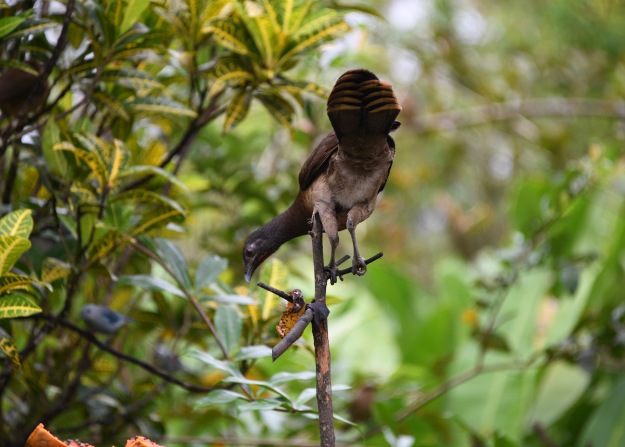 A different saltator, the Buff-throated. 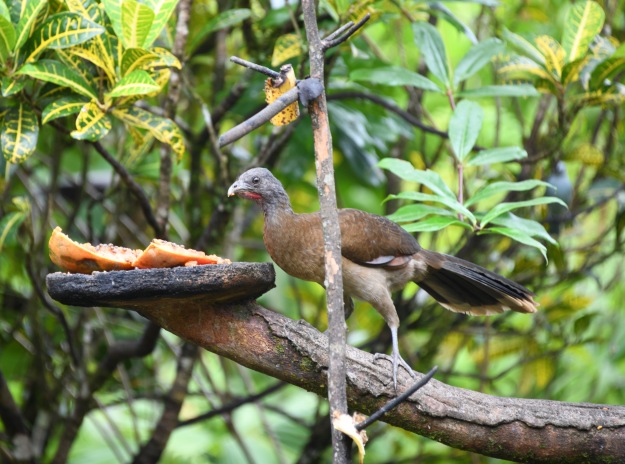 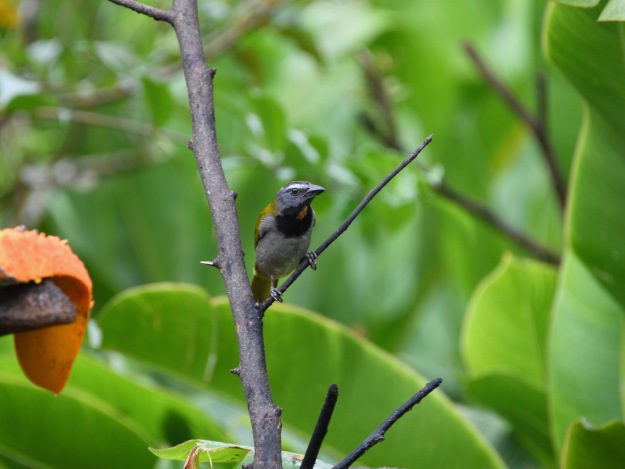 The buff-throated saltator (Saltator maximus) is a seed-eating bird. Traditionally placed in the cardinal family (Cardinalidae), it actually seems to be closer to the tanagers (Thraupidae). It breeds from southeastern Mexico to western Ecuador and northeastern Brazil.

This is the type species of Saltator. Consequently, it and its closest allies would retain the genus name when this apparently polyphyletic group is eventually split up.

The buff-throated saltator is on average 20 cm (7.9 in) long and weighs 42–52 g (1.5–1.8 oz). The adult has a slate-grey head with a white supercilium and a greenish crown. The upperparts are olive green, the underparts are grey becoming buff on the lower belly, and the throat is buff, edged with black. 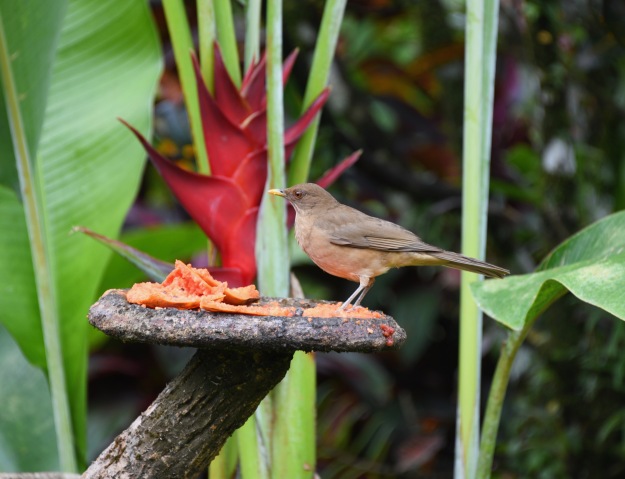 Our old friend the Clay-colored Thrush. 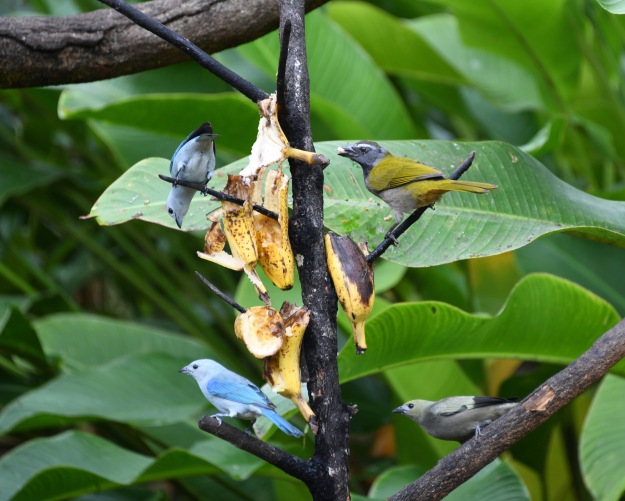 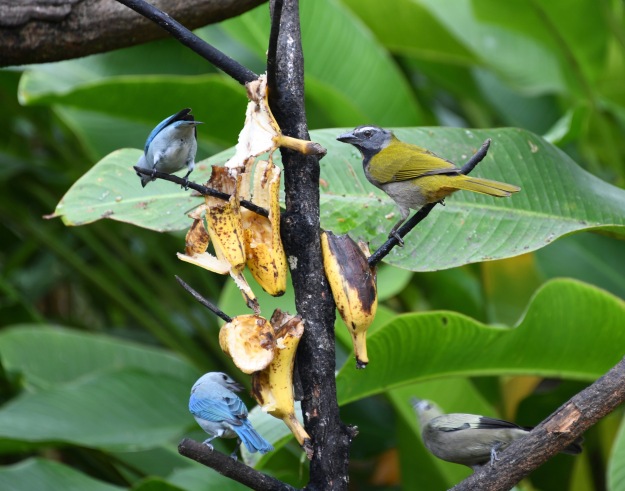 Good side view of the Buff-throated Saltator. 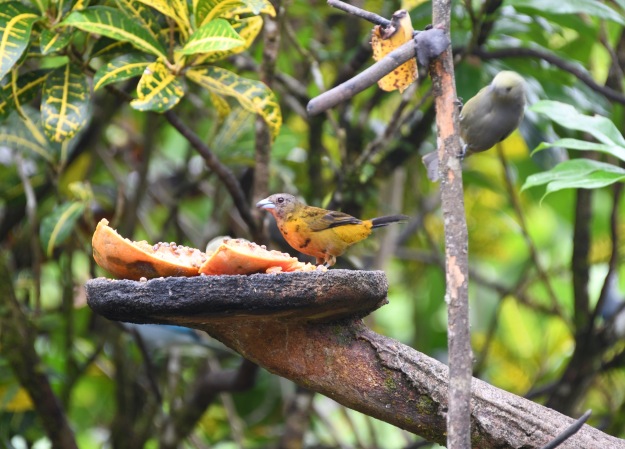 The female of the Scarlet-rumped Tanager looks completely different!

I note the Scarlet-rumped is eating seeds of the papaya rather than fruit. Great Kiskadee looking adorable in the big tree in front of our rental condo in Tamarindo, Costa Rica.

I thought this bird looked a bit like a robin. I figured out it is a Clay-colored Thrush, same family as robins.

From eastern Mexico to northern Colombia, this plain gray-brown thrush is very common in lowland habitats, including parks and gardens. In recent years it has become a regular visitor to southernmost Texas, especially in winter, and it has even nested there a number of times. It was formerly called Clay-colored Robin.

A strange and wonderful bird, this is the Black-headed Trogon.

This beautiful yellow-bellied trogon is found in open forests from southern Mexico south and east through Central America to northwestern Costa Rica. It easily is  distinguished by its solid black upperparts, black tail with broad white tips to the outer rectrices, and dark eye with a pale blue eye ring.

I got a good look at a Summer Tanager.

The Summer Tanager is a bee and wasp specialist. It catches these insects in flight and kills them by beating them against a branch. Before eating a bee, the tanager rubs it on the branch to remove the stinger.

So many birds in this one tree. Makes you realize how important even individual trees – not just forests – are to birds. 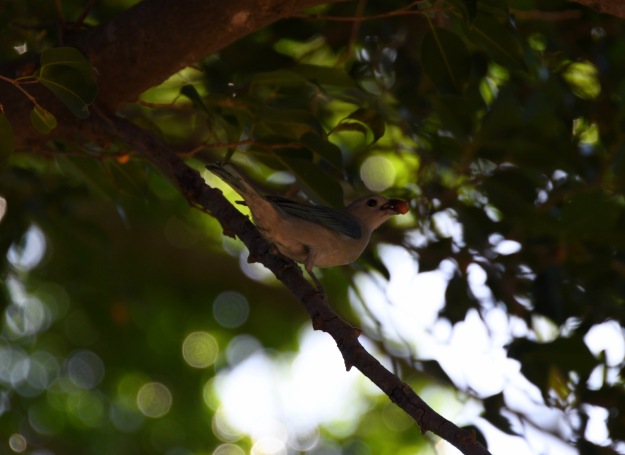 The Blue-gray Tanager is one of the most widespread, and ubiquitous, birds of the humid lowland neotropics. At almost any location between southeastern Mexico and central South America, it is a familiar presence at forest edge, in second-growth, along roads and rivers, in plantations, and even in urban parks and gardens. Blue-gray Tanagers prefer semi-open habitats; they are not found in interior of closed canopy forest, but they can quickly colonize fresh clearings. They are flexible as well in their diet, eating a wide variety of fruit, and also foraging for arthropods. Blue-gray Tanagers typically travel in pairs or small single-species flocks. They may briefly join mixed-species flocks, but do not travel with such flocks; however, Blue-gray Tanagers often join mixed-species aggregations of birds that are attracted to fruiting trees.

The clay-colored thrush was chosen as the national bird for several reasons. Due to its wide range and tendency to live close to humans, it is well known and therefore mentioned in many of Costa Rica’s folk songs, short stories and novels. The males are also cherished for their exquisite song; during mating season, they serenade potential mates with an unmistakable tune. In Costa Rica, their mating season (usually April-June) coincides with the beginning of the green season, and therefore farmers have always taken the yigüirro’s song as the first sign of coming rains.

During our mid-March trip to Costa Rica we drove from Tamarindo to the Arenal area and spent a day and night at the Arenal Volcano Lodge (view from the balcony of our room), with a side visit to Arenal Observatory. 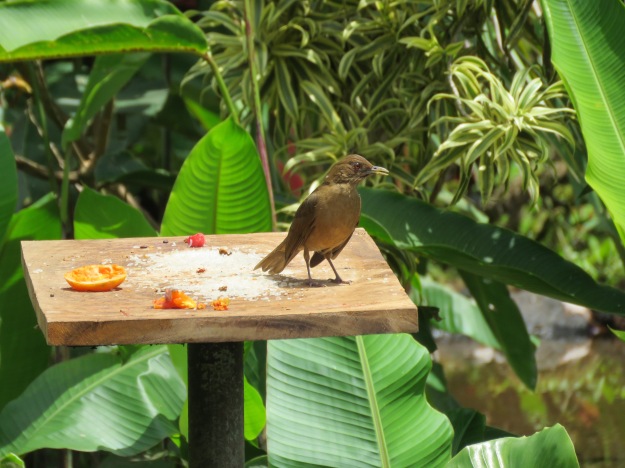 The lodge lured birds with fruit and flowers and running water, to convenient viewing and photography distance. This is a Clay-colored Thrush, I believe.

The clay-colored thrush (Turdus grayi) is a common Middle American bird of the thrush family (Turdidae). It is the national bird of Costa Rica, where it is well known as the yigüirro. Other common names include clay-colored robin.

Someday I would love to write an article about vacation places with the best passive bird watching – like the rental house in Caye Caulker, Belize with a second-story balcony up in the trees… with me in a hammock with a rum drink!

I think this is a Swallow-tailed Kite. We saw many of them but I didn’t get a great pic. Split tail, falcon-like head.

The swallow-tailed kite feeds on small reptiles, such as snakes and lizards. It may also feed on small amphibians such as frogs; large insects, such as grasshoppers, crickets; small birds and eggs; and small mammals including bats. It has been observed to regularly consume fruit in Central America. It drinks by skimming the surface and collecting water in its beak.

We spotted this Crimson-collared Tanager at the Arenal Observatory, a great side trip with good lunch and many walking trails. LINK

A pretty Blue-gray Tanager was waiting a turn at the feeders.

The Blue-gray Tanager is one of the most widespread, and ubiquitous, birds of the humid lowland neotropics. At almost any location between southeastern Mexico and central South America, it is a familiar presence at forest edge, in second-growth, along roads and rivers, in plantations, and even in urban parks and gardens.

We saw a few coatis, or coatimundis,  charming furry raccoon-like mammal. This one was scouting for fallen fruit under the bird feeders.

These birds were a real treat for me. We watched them while eating lunch at the observatory lodge.

The Montezuma Oropendola is about the size of a crow and quite exotically beautiful. (This is one of my favorite photos from Costa Rica.)

The oropendola, or Montezuma bird as I heard one local call it, is an icterid, a member of the New World blackbird family (like my friends the grackles). It has a kind of crazy and beautiful song, which you can hear HERE.

This is a bird I will never forget.

We found this bird near a trail. It seemed unconcerned by our presence. It is a Crested Guan, I think.

In protected areas where hunting is not allowed, the species can be quite approachable and even tame, but throughout much of its range Crested Guan is heavily hunted. 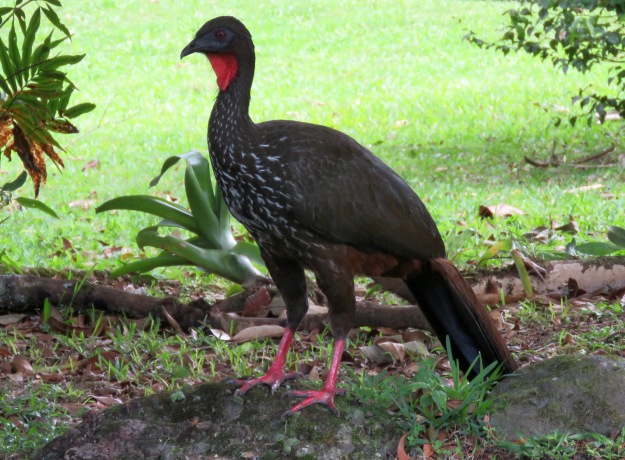 A bit dinosaur-like, don’t you think? 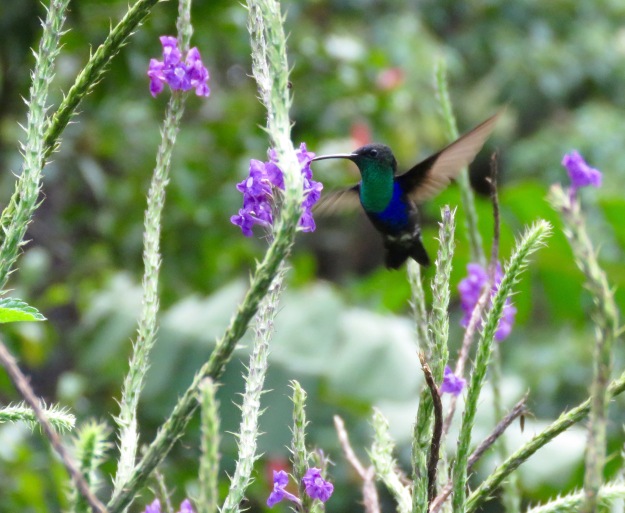 Very happy to capture this flitting jewel of a hummingbird. Not sure what kind it is.

(Update: later IDed via Facebook What’s This Bird as a Crowned Woodnymph.)

From many places we could see the volcano. It has been dormant since 2010, which doesn’t seem like a very long time!

On our little hike we came across some cattle and their bird pals the Cattle Egrets.

The short, thick-necked Cattle Egret spends most of its time in fields rather than streams. It forages at the feet of grazing cattle, head bobbing with each step, or rides on their backs to pick at ticks. This stocky white heron has yellow plumes on its head and neck during breeding season. Originally from Africa, it found its way to North America in 1953 and quickly spread across the continent. Elsewhere in the world, it forages alongside camels, ostriches, rhinos, and tortoises—as well as farmers’ tractors.

In the woods we saw a Chestnut-mandibled Toucan.

It is one of the larger, more conspicuous species of toucan, and is often noted for its yelping, far-carrying vocalization (described by locals as “Díos te dé!”). It is largely frugivorous, but like other toucans it occasionally feeds on insects, lizards, and the eggs of other birds.

Next morning at the lodge I saw this neat medium-sized bird, a Smooth-billed Ani.

A bird of tropical savannahs in the Caribbean and South America, the Smooth-billed Ani reaches the United States only in southern Florida.