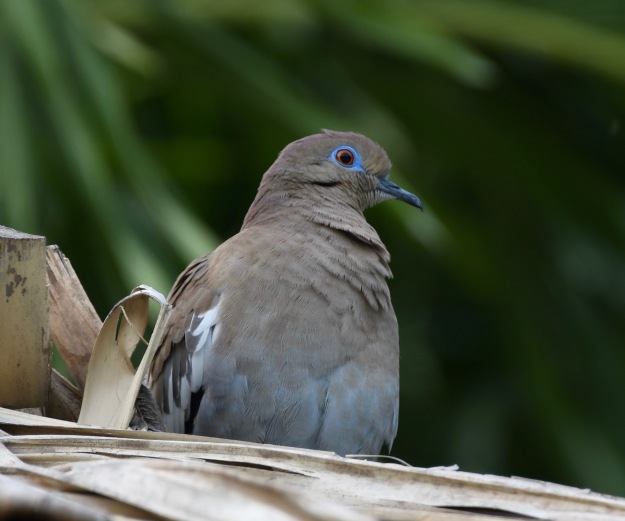 Coffee and papaya for breakfast and a little friend joined us in a tree near our patio.

Cinnamon Hummingbird is completely cinnamon below, with bronze-green upperparts. It is common in dry forests, where it is present year round; but in seasons when resources are less available, some individuals may move to higher elevations, some even reaching pine and pine-oak forests. Cinnamon Hummingbird occurs along the Pacific slope from western Mexico south to northwestern Costa Rica, and also on the Yucatan Peninsula in southeastern Mexico and in Belize.

Patio birding at its finest. 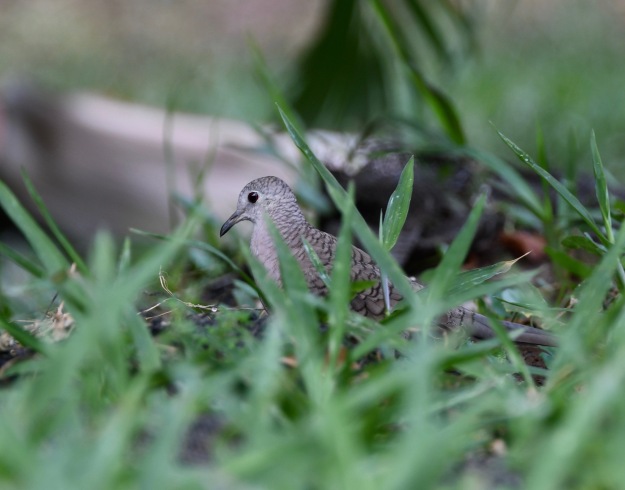 Also seen from the patio, an Inca Dove.

The tiny Inca Dove is covered in tan scaly-looking feathers and blends right in with its suburban desert habitats. That is, until it bursts into flight, making a dry rattling whir with its wings while flashing chestnut underwings and white in its tail. It nods its head forward and back with each step and coos a mournful “no hope” from the trees.

Great-tailed Grackle, male, perches atop a thatched umbrella poolside at our condo complex. 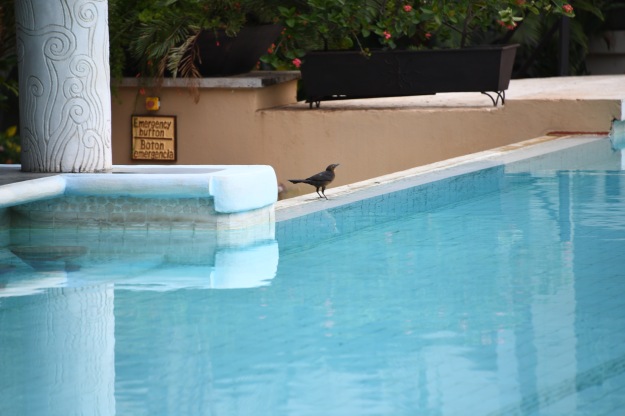 Female grackle at the edge of what she probably considers a very large birdbath.

They’re boisterous in both attitude and color: a black bandit’s mask, a yellow belly, and flashes of warm reddish-brown when they fly. Kiskadees sit out in the open and attract attention with incessant kis-ka-dee calls and sallying flights.

They are quite noisy in the tree in front of the condo, but hard to photograph when they are zipping around in flight. 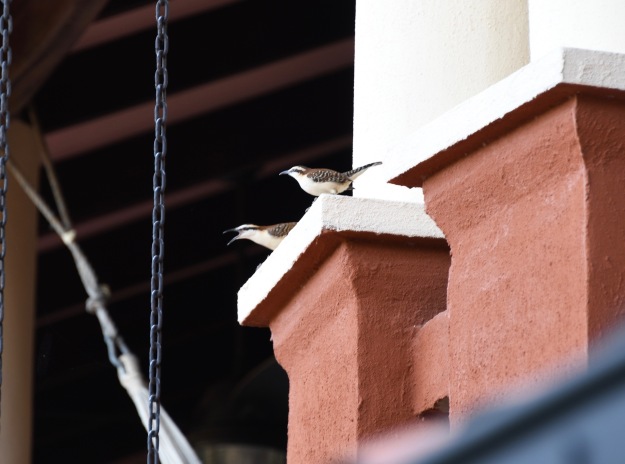 Also noisy: Rufous-naped Wrens, visiting the palms in front of our patio then flying up to a second-story condo porch.

A large and conspicuous member of the Troglodytidae, the Rufous-naped Wren (Campylorhynchus rufinucha) is a resident breeding species occurring in a nearly continuous distribution along the Pacific coast of Mexico and Central America (Mesoamerica). It is boldly marked, with various amounts of rufous and black on the head and nape, a conspicuous black stripe through the red eye contrasting with white above and below, and a patterned back and white tail and wings. Birds often breed cooperatively. This wren is a highly vocal species that is well known to produce richly melodious song, sometimes combined into synchronized simultaneous or antiphonal duets and choruses. Its calls are usually short and rasping.