Brown-headed Cowbird at the top of the dawn redwood in our front yard. 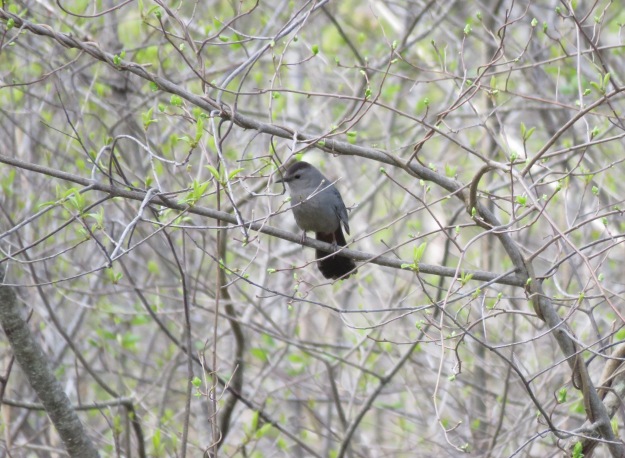 Gray Catbird at the edge of the red maple swamp out back. 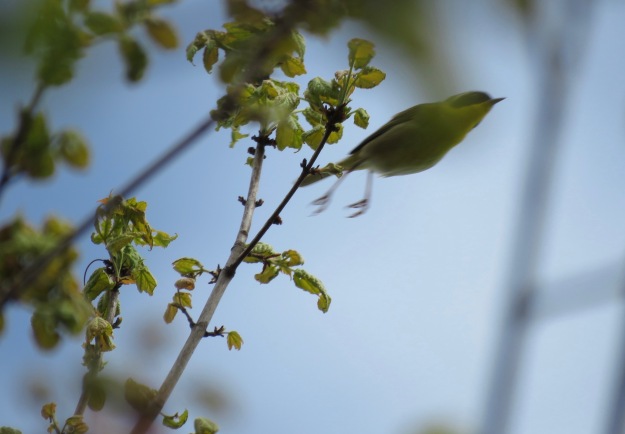 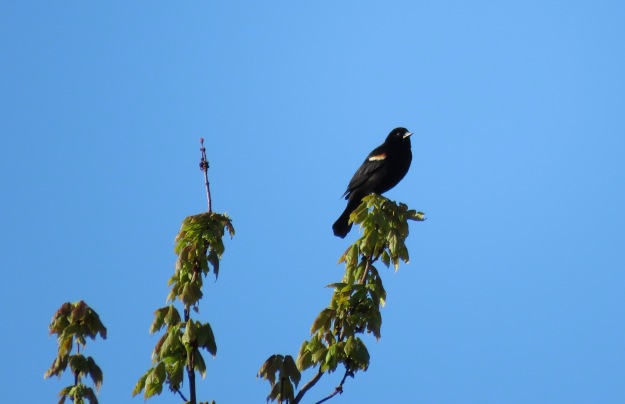 Red-winged Blackbird sings atop a maple at the edge of the swamp.

Eastern Towhee, female, scuffling in leaves at the edge of the field.

Brown-headed Cowbird, female, being stealthy down low in the woods.

It was very nice yesterday when the sun finally came out. 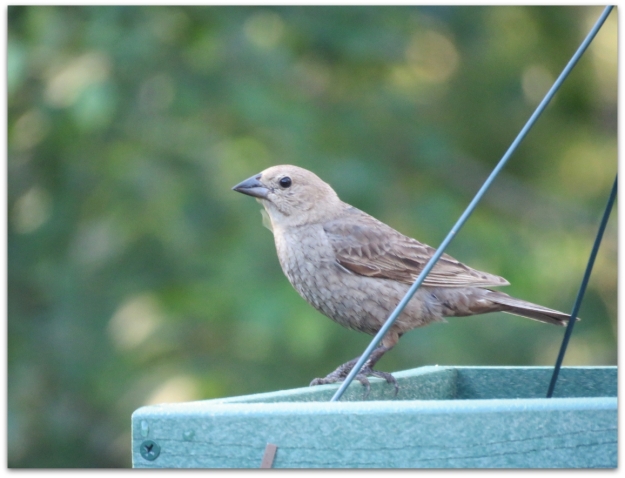 I think this is a juvenile cowbird. I wonder who it’s foster parents were?? 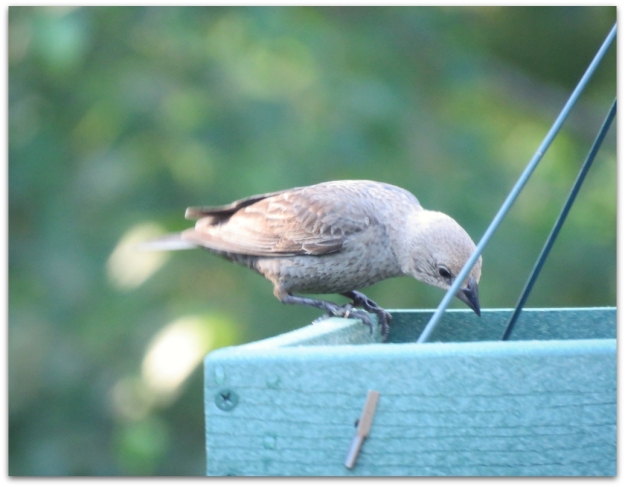 A pretty calm bird, exploring the offerings at Chez Tray. 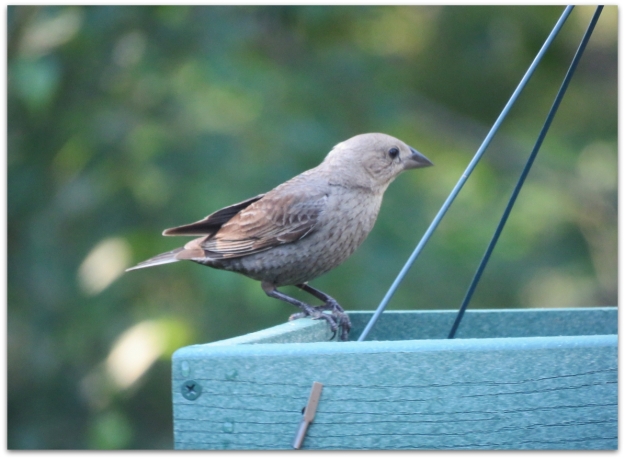 Feathers look pretty new and in good condition. I guess it could also be a female right after molting.

It’s 38 degrees and breezy. A Brown-headed Cowbird perched where the woods meet our backyard, warmed one foot then the other, and sang his spring blackbird songs.

This fellow sang only briefly a couple of times while I was recording. I think he was a little camera shy.

I value my garden more for being full of blackbirds than of cherries, and very frankly give them fruit for their songs. – Joseph Addison, The Spectator, 1712 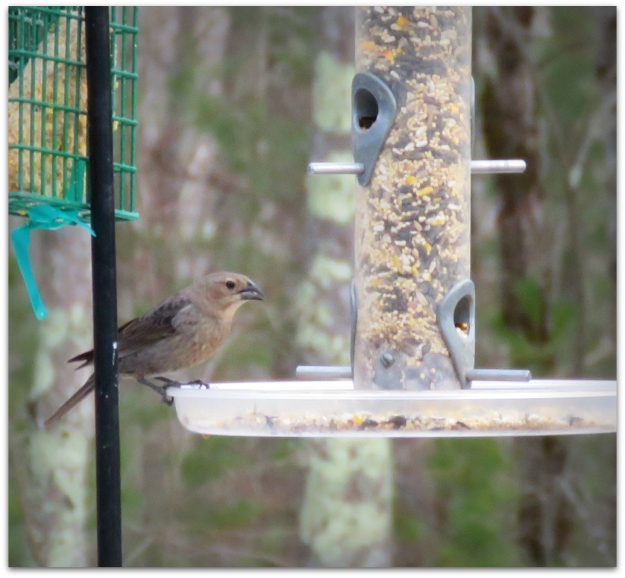 The female Brown-headed Cowbird made an appearance yesterday, a few hours after I spotted the male. Both seem to have arrived with a mixed flock of Red-winged Blackbirds and Common Grackles.

The cowbird and a male Northern Cardinal shared the feeder for a few minutes in the late afternoon. 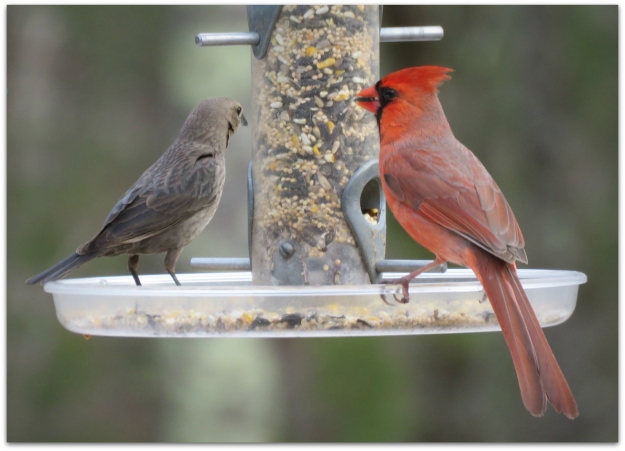 This is the moment my husband opened the sliding glass door to the back deck and both birds became alert, just before flying off. 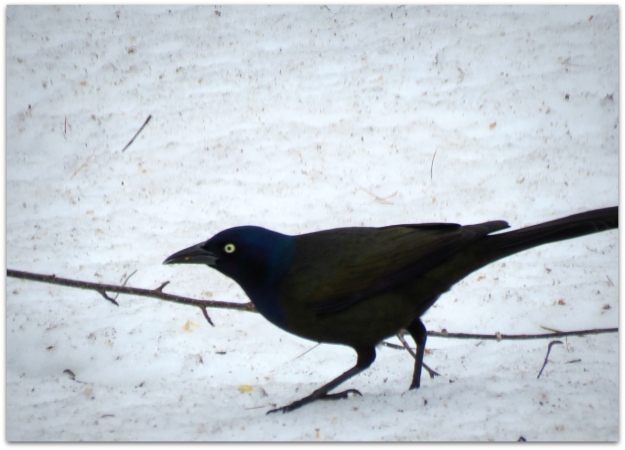 Why Do Blackbirds Form Large Flocks? … Though many birds band together during winter, none are as notorious for their flocking behavior as blackbirds…red-winged blackbirds, European starlings, common grackles and brown-headed cowbirds.

This was a small flock yesterday, a mini-flock, maybe a transitioning-to-spring flock (if there is such a thing) with 6 or 7 grackles and about the same number of red-winged blackbirds, plus the cowbird couple.

How now, Brown-headed Cowbird? Haven’t seen you in months.

This one is a male. Females look very different I learned last July: Mystery bird is a ‘songbird chicken.’ 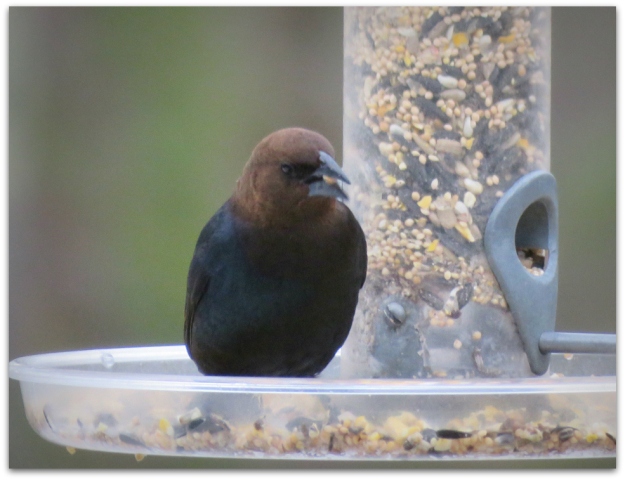 The Brown-headed Cowbird is a stocky blackbird with a fascinating approach to raising its young. Females forgo building nests and instead put all their energy into producing eggs, sometimes more than three dozen a summer. These they lay in the nests of other birds, abandoning their young to foster parents, usually at the expense of at least some of the host’s own chicks. Once confined to the open grasslands of middle North America, cowbirds have surged in numbers and range as humans built towns and cleared woods.

Native birds, but a bit of a problem since their habitat has expanded.

This bird just outside my bedroom window this morning sounded like a chattering squirrel. She was eating the millet seeds from the mix of bird food in the platform feeder. I took a photo and tried to figure out what she was.

Her finch-like beak threw me off a bit, but finally I figured out she was a female Brown-headed Cowbird.

We have had two to four cowbirds visiting the yard and feeders a few times a week since spring, usually in pairs. Maybe this was a juvenile female. Wonder who her foster parents were?

The Brown-headed Cowbird is North America’s most common “brood parasite.” A female cowbird makes no nest of her own, but instead lays her eggs in the nests of other bird species, who then raise the young cowbirds.

Here is a photo of Mr. and Mrs. Brown-headed Cowbird, taken in early April.

They are very “chill” birds, slow to startle, deliberate and focused in their feeding, mixing easily with other species. I remember one spring day I kept an eye on a pair as they sat still for (it seemed) hours on a branch in the maple tree, staring at each other.

Cowbirds earned their common name from the habit of following herds of buffalo (and cattle) in search of the insect prey that were flushed up by the large grazing mammals.

Cowbirds have been called songbird chickens because they can lay more eggs than any other wild bird. A single female is capable of laying nearly one egg per day at the peak of the breeding season, and produces a total of 30-40 eggs over the 2-3 month breeding period (May-July).

Cowbird eggs require an incubation period of only 11-12 days, whereas most host species require 12-14 days, and some as many as 17 days of incubation. Consequently, cowbird young hatch earlier than the host young, affording the parasite a distinct advantage in competing for food with its younger foster siblings.

Fascinating stuff! All learned while sipping my morning (bird-friendly) coffee.