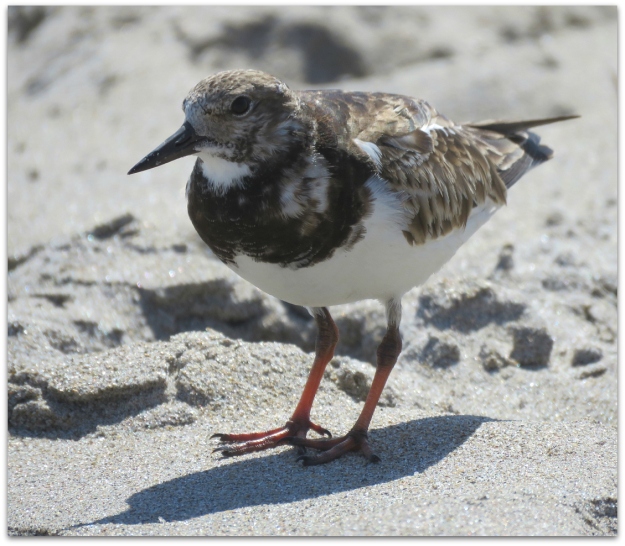 We were parked in our new Tommy Bahama “Relax” backpack beach chairs with built in cooling pockets and cup holders for Sunday brunch beverages and a flock of these little guys were coming quite close, hoping for crumbs from our fresh, hot Cuban sandwiches from the nearby Island Pantry.

A shorebird that looks almost like a calico cat, the Ruddy Turnstone‘s orange legs and uniquely patterned black-and-white head and chest make them easy to pick out of a crowd. These long-distance migrants breed in the arctic tundra, but spend the off seasons on rocky shorelines and sandy beaches on both North American coasts (as well as South America, Eurasia, Africa, and Australia). They use their stout, slightly upturned bill to flip debris on the beach to uncover insects and small crustaceans.

For shorebirds like the Ruddy Turnstone, getting fat is critical. Unlike humans, which use carbohydrates as fuel, birds use fat to power their migrations. Birds that don’t get fat enough before they depart often leave later and some may not even make it to the breeding or wintering grounds.

It was a very windy day. Some fishermen battled the elements.

There were some Sanderlings around too, as there often are with Ruddy Turnstones.

A couple of kite surfers were fun to watch just off the beach. 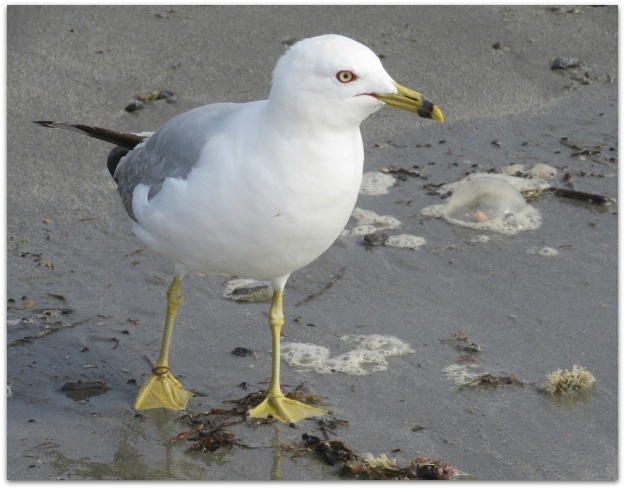 Morning walk on Jenness Beach in Rye yesterday (a 15-minute drive away from home), watching Ring-billed Gulls have breakfast.

Holding paws. #rubyandradar #germanshepherdsofinstagram
Green River morning #floridawetseason
Caption this owl. (My daughter Anna says he has “judgmental grandfather energy.”) Artie the great horned owl is an educational ambassador at Treasure Coast Wildlife Center in Palm City, Florida. I was there today for my weekly volunteering. Stop by and see Artie sometime… if you want to be judged! 😀🦉#greathornedowl #treasurecoastwildlifecenter