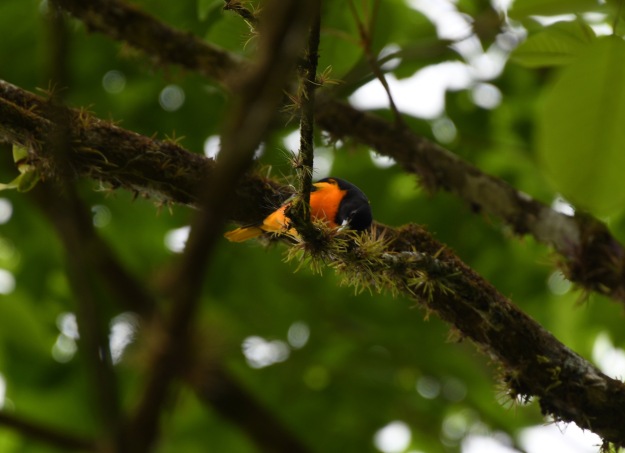 Orange and black caught my eye outside the door of our lodge.

It’s January. Baltimore, do you know where your orioles are?

Medium- to long-distance migrant. Baltimore Orioles spend summer and winter in entirely different ranges. From early April to late May, flocks arrive in eastern and central North America to breed from Louisiana through central Canada. They start to leave as early as July for wintering grounds in Florida, the Caribbean, Central America, and the northern tip of South America.

We walked the grounds of our lodge after a 3-and-half hour drive from Tamarindo on the coast up into the mountains. It was lush and beautiful. Then we had a delicious dinner, soaked in the thermal hot spring pools, and went to our lovely rooms.

This hummingbird knew I was there watching it. I had help on Facebook’s “What’s This Bird” identifying it as a Rufous-tailed Hummingbird. 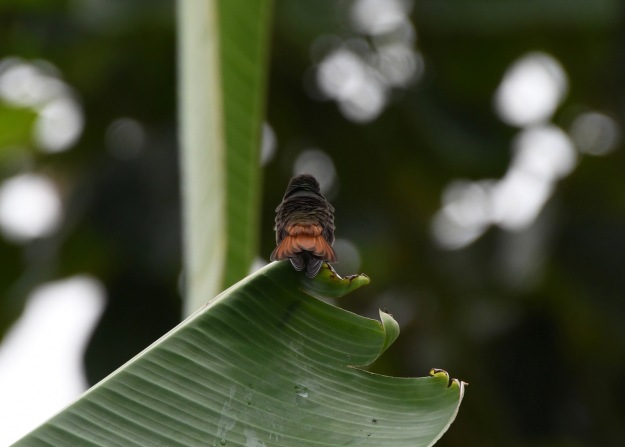 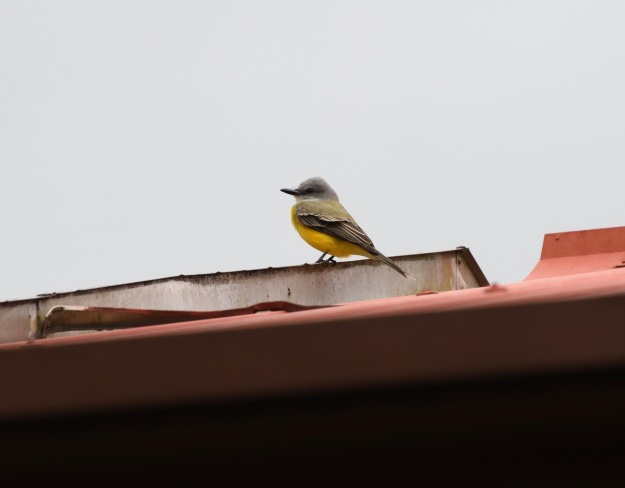 Tropical Kingbird rests on a rooftop. 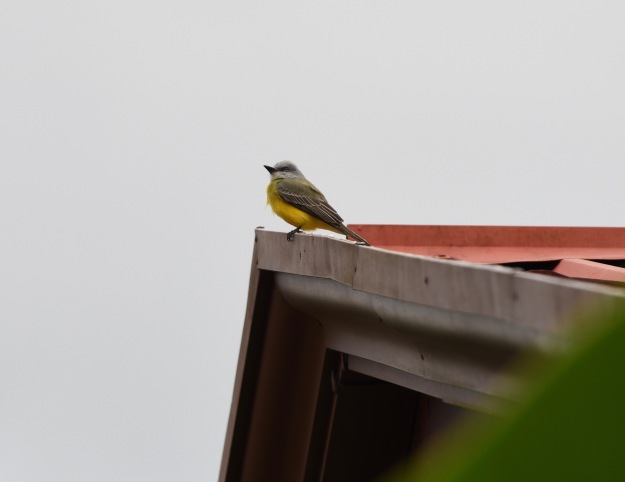 An extremely common and widespread bird of the American tropics, the Tropical Kingbird barely reaches the United States in south Texas and southern Arizona.

I guess the thistle feeder is just a convenient perch for this male Baltimore Oriole. Or doesn’t he know …

Baltimore Orioles eat insects, fruit, and nectar. The proportion of each food varies by season: in summer, while breeding and feeding their young, much of the diet consists of insects, which are rich in the proteins needed for growth. In spring and fall, nectar and ripe fruits compose more of the diet; these sugary foods are readily converted into fat, which supplies energy for migration. 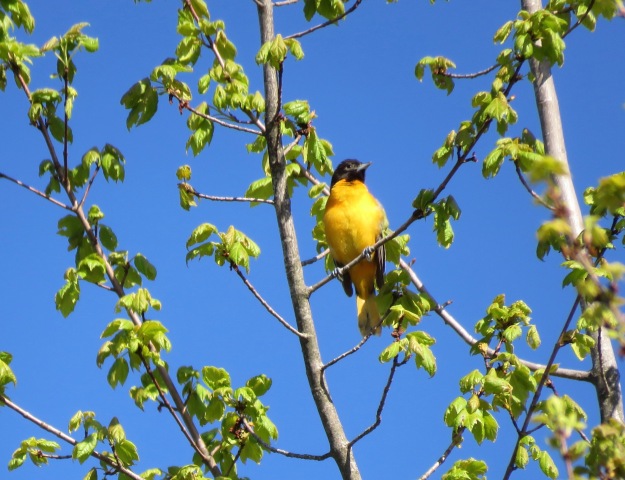 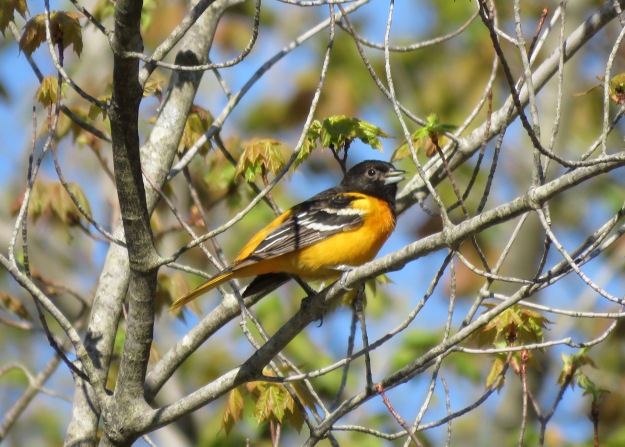 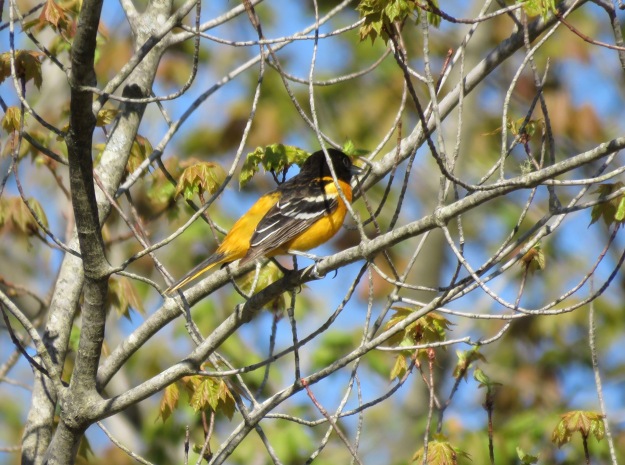 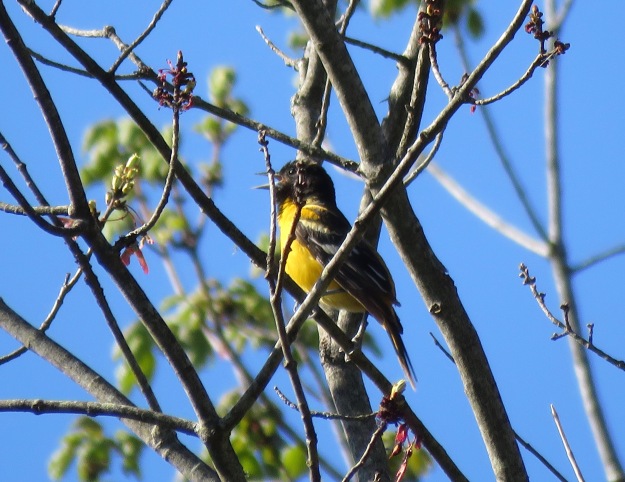 Baltimore Orioles are singing like crazy all over the place. I saw at least three this morning – two out by the pond and field and one up by the house.

The rich, whistling song of the Baltimore Oriole, echoing from treetops near homes and parks, is a sweet herald of spring in eastern North America. Look way up to find these singers: the male’s brilliant orange plumage blazes from high branches like a torch.

Baltimore Orioles got their name from their bold orange-and-black plumage: they sport the same colors as the heraldic crest of England’s Baltimore family (who also gave their name to Maryland’s largest city).

Orioles are members of the Icterid family.

Baltimore Oriole, spotted Sunday morning just north of Banfield Road on a walk along an old rail line in Portsmouth.

We saw, and heard, three males.

The rich, whistling song of the Baltimore Oriole, echoing from treetops near homes and parks, is a sweet herald of spring in eastern North America. Look way up to find these singers: the male’s brilliant orange plumage blazes from high branches like a torch. 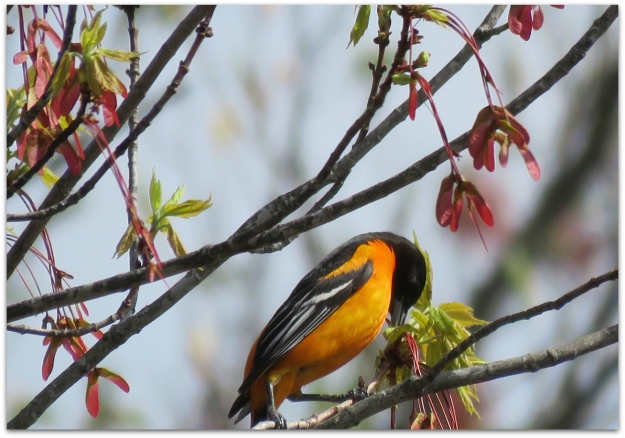 Maybe I should try to attract them to my backyard.

Cornell Lab of Ornithology Backyard Tips: Baltimore Orioles seek out ripe fruit. Cut oranges in half and hang them from trees to invite orioles into your yard. Special oriole feeders filled with sugar water supplement the flower nectar that Baltimore Orioles gather. You can even put out small amounts of jelly to attract these nectar-eaters (just don’t put out so much that it risks soiling their feathers).

Baltimore Orioles are medium sized songbirds made of orange marmalade, black licorice, and pure, clear, whistling songs. They feed on crabapples, nectar and human tears of joy that winter is over. Find this bird by whispering a prayer to St. Francis and going outside. In winter, some orioles migrate to shade-grown coffee or cacao farms in Central America, while others go to sleep in the cotton canvas folds of patio umbrellas stored in garage attics.