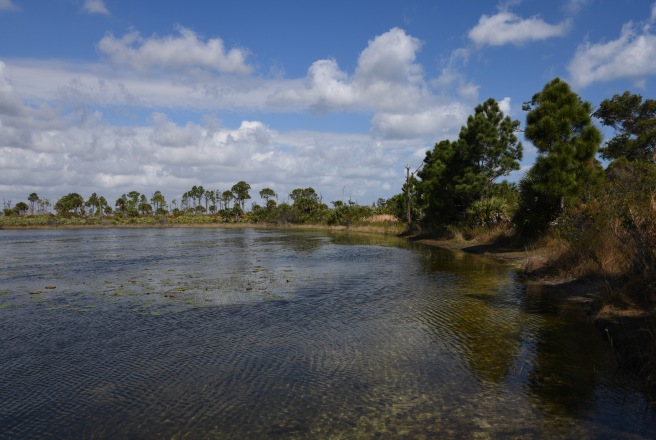 Cool lake on a hot day at Jonathan Dickinson State Park, last Sunday, when I went on a solo trek to find scrub jays. 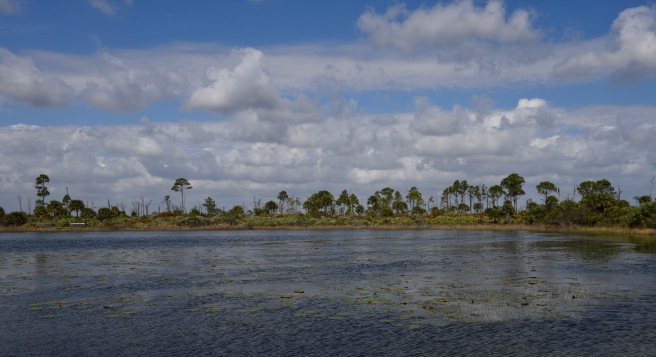 I walked around this lake. It smelled a bit like a northern freshwater lake – cool, fresh, watery and alive! 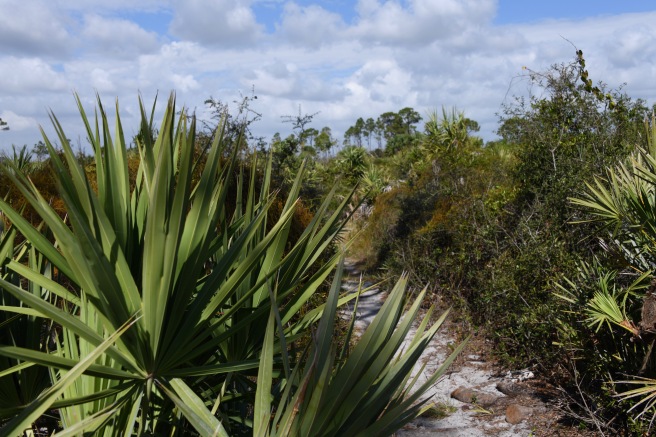 This narrow trail was shared by mountain bikers. Best to choose the trails marked for foot traffic only, I learned. 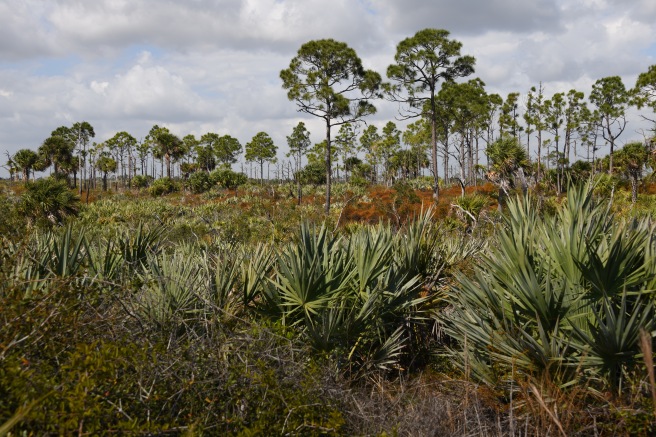 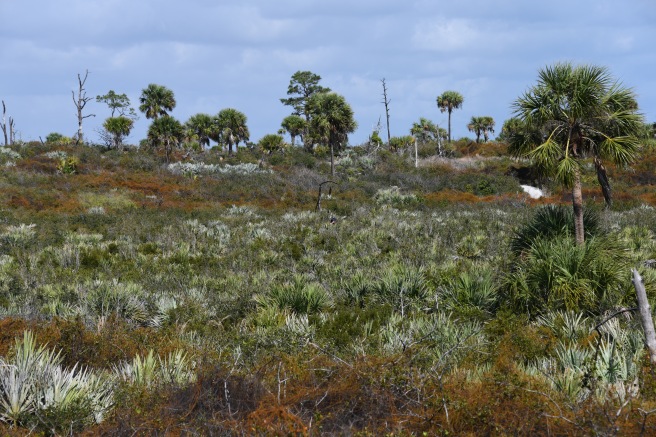 Florida sand pine scrub is an endangered subtropical forest ecoregion found throughout Florida in the United States.[4] It is found on coastal and inland sand ridges and is characterized by an evergreen xeromorphic plant community dominated by shrubs and dwarf oaks. Because the low-nutrient sandy soils do not retain moisture, the ecosystem is effectively an arid one. Wildfires infrequently occur in the Florida scrub. Most of the annual rainfall (about 135 cm or 53 in) falls in summer. It is endangered by residential, commercial and agricultural development. 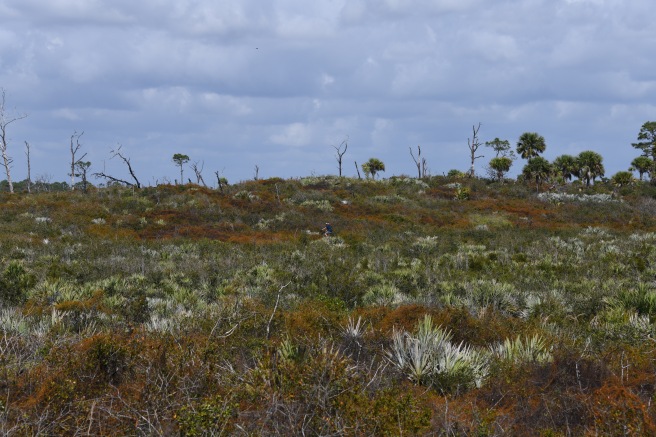 Can you see the mountain biker in the above two photos? There is an active club at the park, Club Scrub. 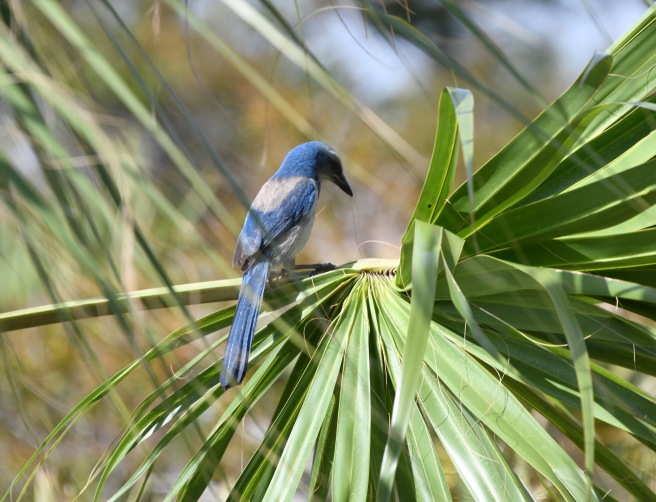 But count me as a member of Club Scrub-Jay! (They should start one, right?) Here’s a Florida Master naturalist who is a big fan…

Why the Scrub-Jay should be Florida’s state bird, with Eva Ries

It has a beautiful dusty-gray breast, it has a gray collar around the back, it’s blue up top with a gray eyebrow, and it has the most unusual call. When they call to their compatriots, they make a rrih! rrih! rrih-rrih-rrih!

Video of Florida Scrub-Jay “happy song” while perched on a man’s hat! LINK 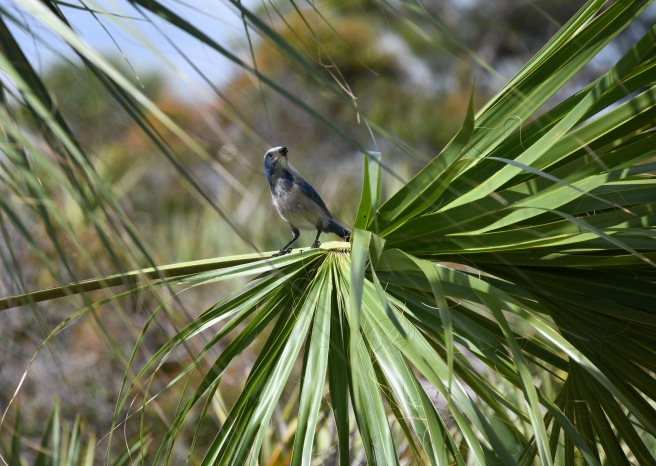 They are not hard to find, when you are in their habitat. They are curious and the landscape is open. 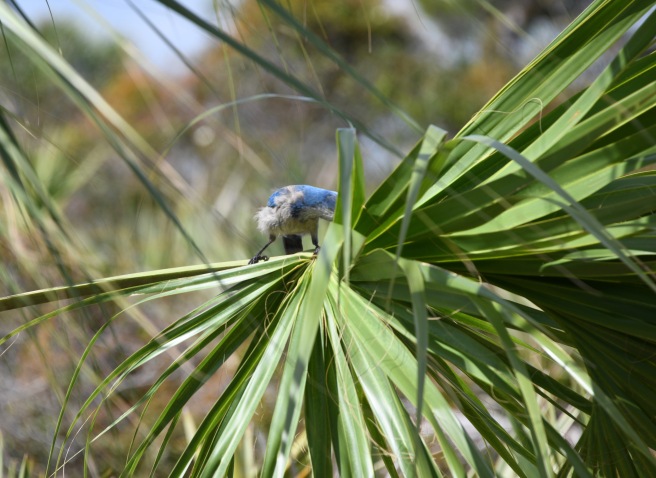 This bird is noteworthy on several counts. It lives nowhere in the world except Florida, it has a complicated social system, it has been the subject of very detailed field studies, and it is threatened by loss of habitat. Formerly considered just a race of the scrub-jays found in the west, it is now classified as a full species. 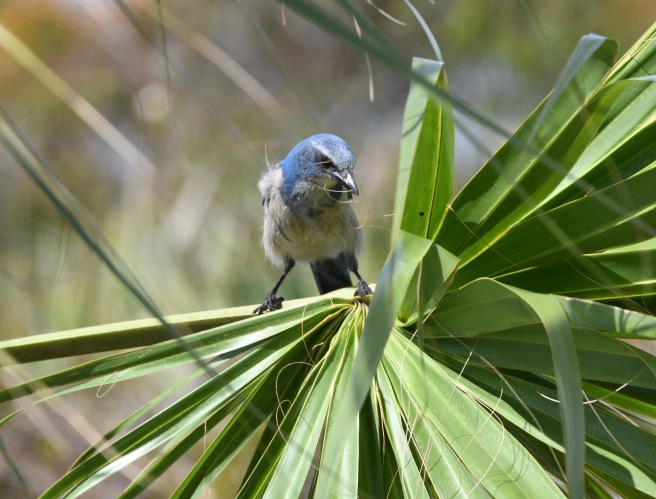 Breeds in cooperative flocks. Each nesting territory is occupied by an adult pair and often by one to six “helpers,” usually the pair’s offspring from previous years. These additional birds assist in defending the territory and feeding the young. Studies have shown that a pair with “helpers” is likely to raise more young than a pair without. Nest site is in tree or shrub, usually an oak, with sand live oak strongly favored. 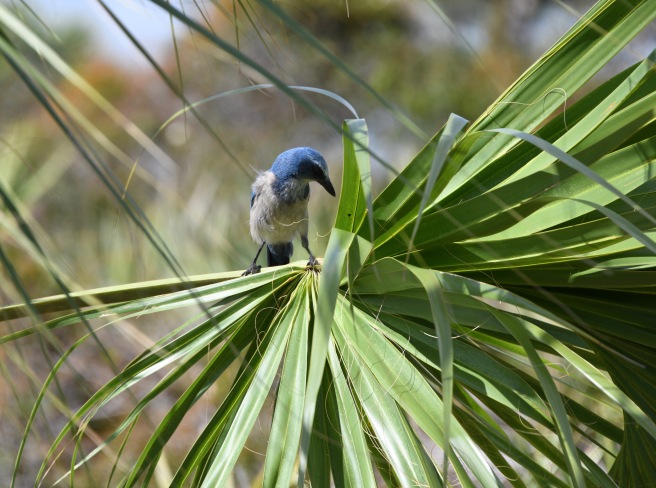 I saw a total of three scrub-jays but just focused on getting decent shots of this one, close by and in good light. 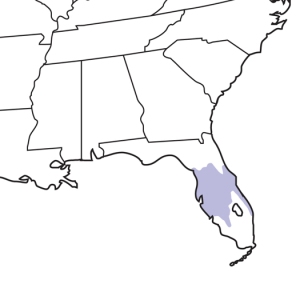 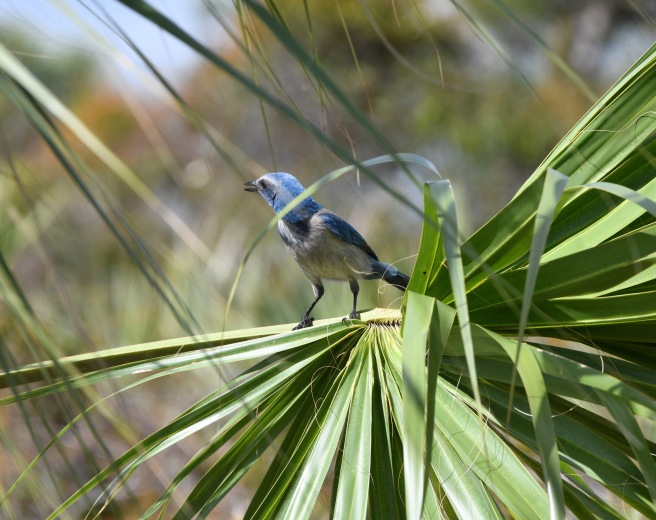 A bit jay-like appearance but without a crest. Here is the familiar and widespread (east of the Rocky Mountains) Blue Jay for comparison, from a little later that morning in the park… 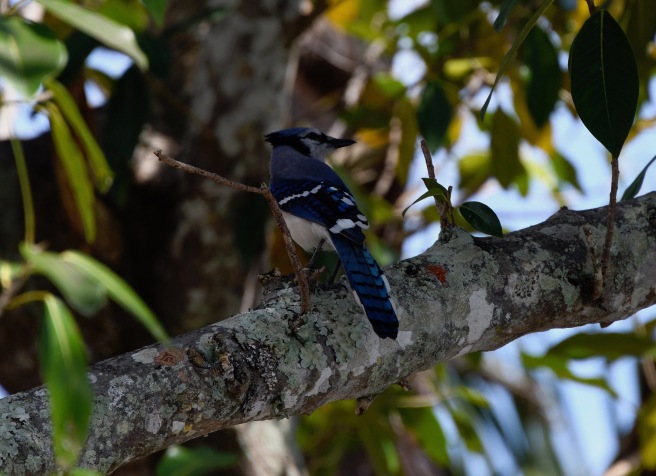 Blue Jays’ behavioral attitude seems a bit fussier and sassier, like they enjoy complaining and picking fights. I watched them a lot in New Hampshire, especially at my bird feeders. 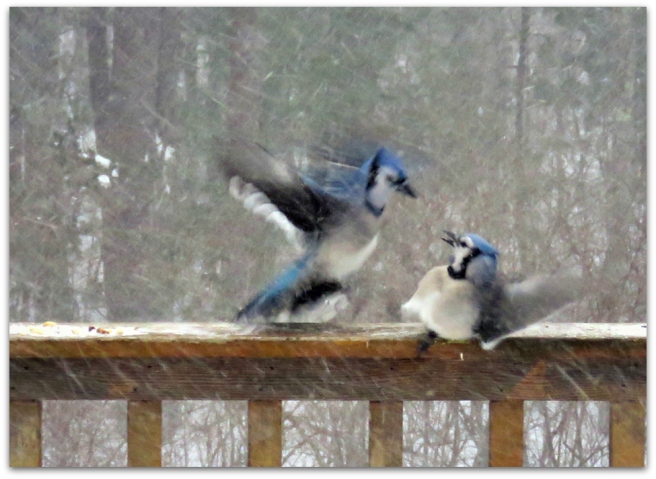 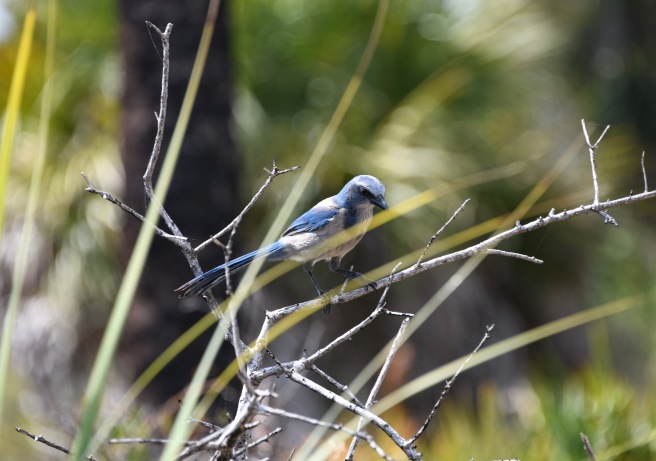 The Scrub-Jay seems a bit more peaceful, even elegant, especially for a corvid. Although maybe I need to spend more time observing them.

For the past 2 million years, Florida has been home to a superlative bird found nowhere else on earth. These birds are remarkably smart, with extraordinary memory and perhaps even the ability to plan ahead. Highly social yet quarrelsome, they’re like the stars of an avian soap opera. And they’re as brash and curious as precocious kids. Many a jubilant birdwatcher has turned to find one mischievously perched upon their shoulder. 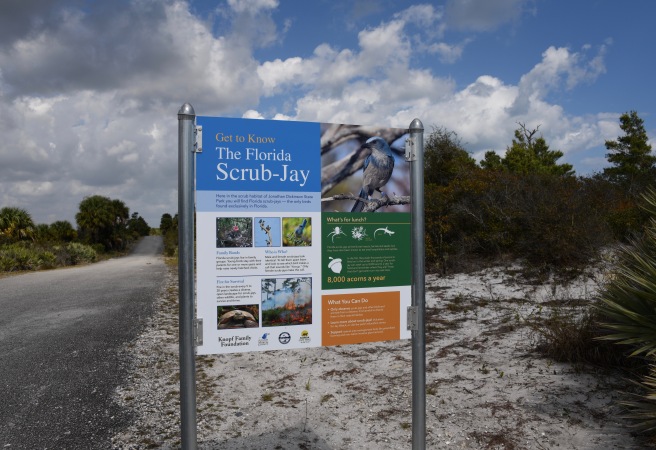 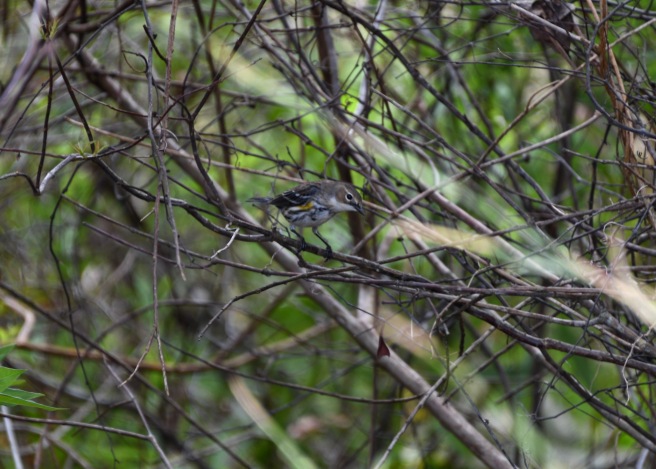 I also got close to a Yellow-rumped Warbler in a thicket, a winter visitor to Florida. 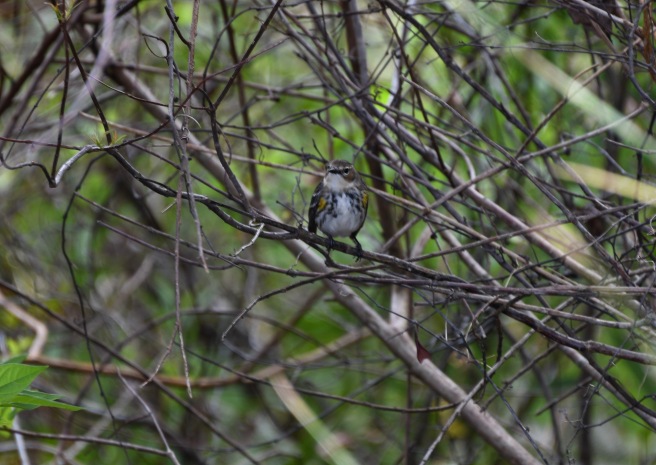 The Yellow-rumped Warbler is the only warbler able to digest the waxes found in bayberries and wax myrtles. Its ability to use these fruits allows it to winter farther north than other warblers, sometimes as far north as Newfoundland. 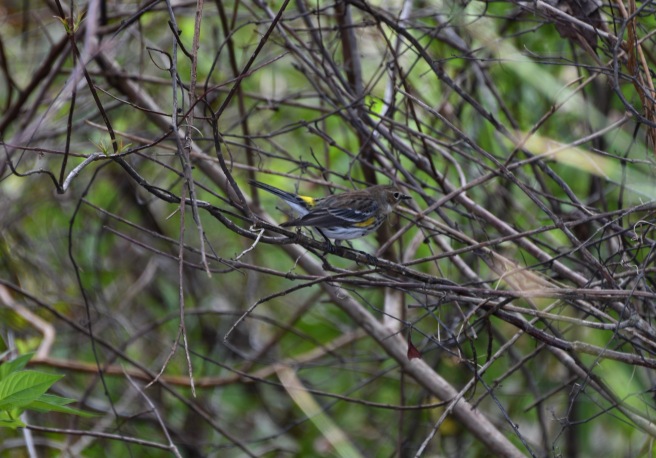 Yellow-rumped Warblers are perhaps the most versatile foragers of all warblers. They’re the warbler you’re most likely to see fluttering out from a tree to catch a flying insect, and they’re also quick to switch over to eating berries in fall. Other places Yellow-rumped Warblers have been spotted foraging include picking at insects on washed-up seaweed at the beach, skimming insects from the surface of rivers and the ocean, picking them out of spiderwebs, and grabbing them off piles of manure.

I bought an annual pass to Florida State Parks and I will be heading back to Jonathan Dickinson again soon!

One thought on “Club Scrub-Jay”