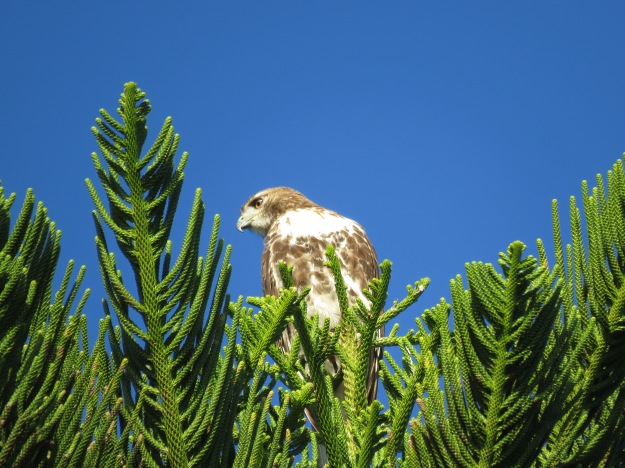 First bird of the New Year, a gorgeous Red-tailed Hawk!

This fine, fierce-looking raptor was in the Norfolk Island pine in our front yard. I walked out on the front porch in my jammies with my camera, to see what I could see. What auguries and portents for 2019. Lazy-birding at its best. 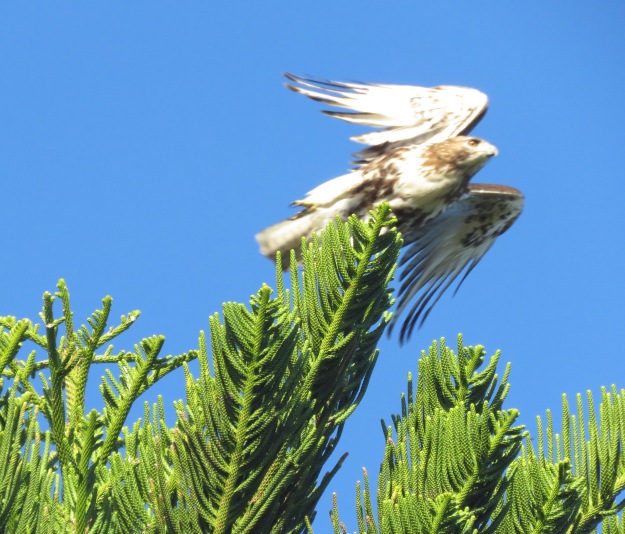 I actually had ID help from What’s This Bird on Facebook. Speaking of lazy. 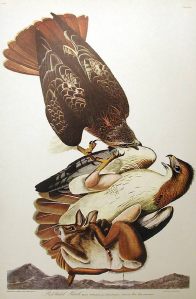 Its flight is firm, protracted, and at times performed at a great height. It sails across the whole of a large plantation, on a level with the tops of the forest trees which surround it, without a single flap of its wings, and is then seen moving its head sidewise to inspect the objects below. This flight is generally accompanied by a prolonged mournful cry, which may be heard at a considerable distance, and consists of a single sound resembling the monosyllable Kae, several times repeated, for three or four minutes, without any apparent inflection or difference of intensity. It would seem as if uttered for the purpose of giving notice to the living objects below that he is passing, and of thus inducing them to bestir themselves and retreat to a hiding-place, before they attain which he may have an opportunity of pouncing upon one of them. When he spies an animal, while he is thus sailing over a field, I have observed him give a slight check to his flight, as if to mark a certain spot with accuracy, and immediately afterwards alight on the nearest tree. He would then instantly face about, look intently on the object that had attracted his attention, soon after descend towards it with wings almost close to his body, and dart upon it with such accuracy and rapidity as seldom to fail in securing it. 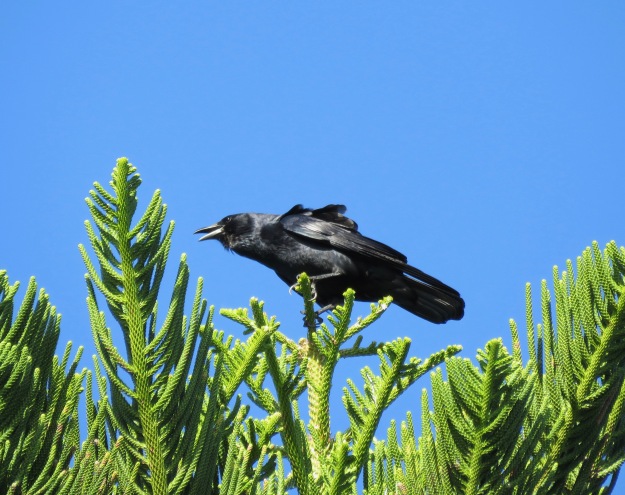 Fish crows were the first bird I heard this year, and the second bird I saw and photographed. There was a noisy flock out of sight this morning when I had coffee on the porch. 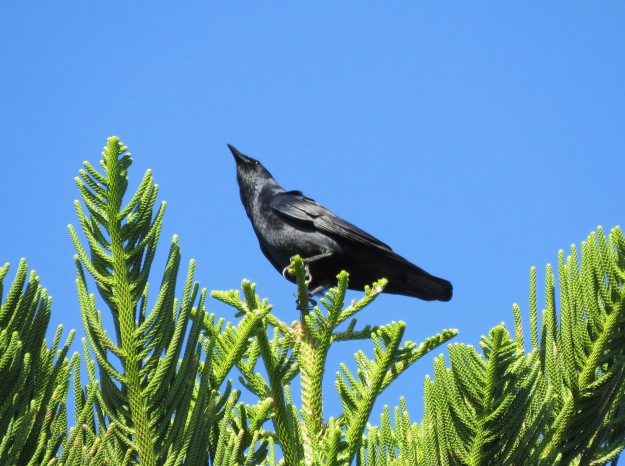 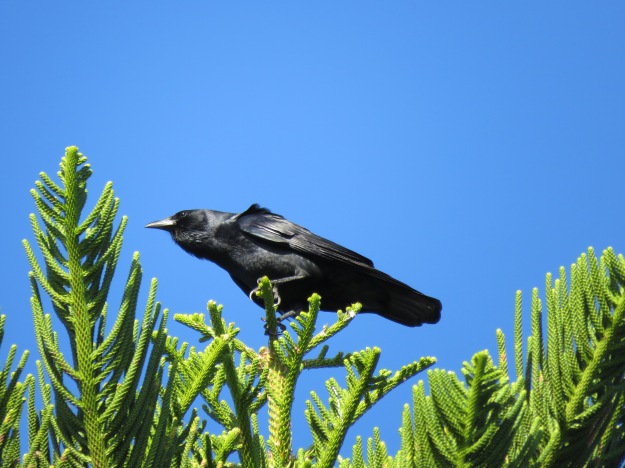 The fish crow is superficially similar to the American crow, but is smaller (36–41 cm in length) and has a silkier, smoother plumage by comparison. The upperparts have a blue or blue-green sheen, while the underparts have a more greenish tint to the black. The eyes are dark brown. The differences are often only really apparent between the two species when seen side by side or when heard calling. 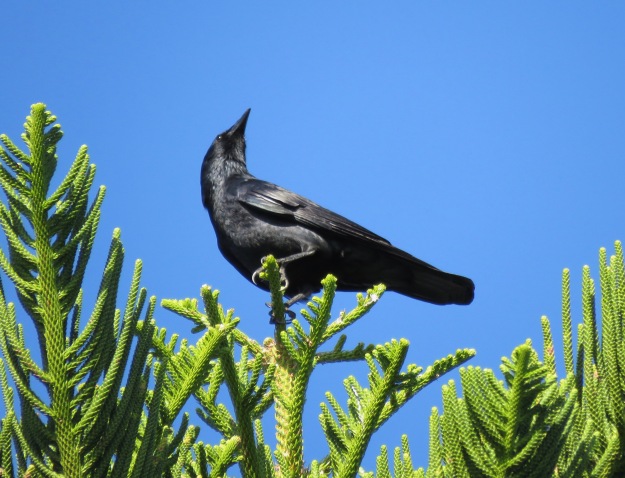 …when calling, fish crows tend to hunch and fluff their throat feathers. 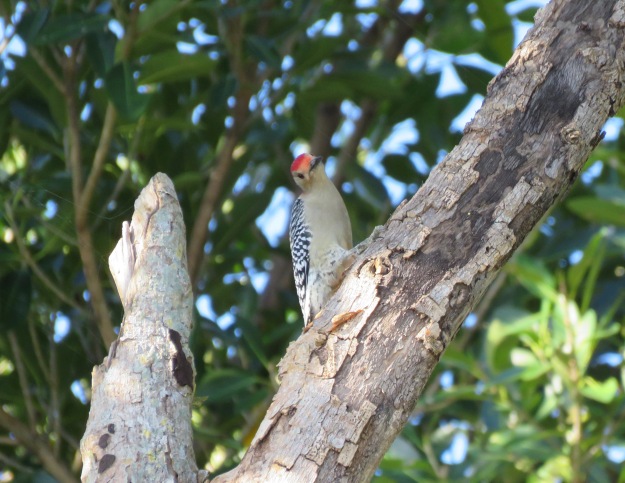 Let’s just throw in this third bird of the year, a Red-bellied Woodpecker, male, on the neighbor’s banyan tree. 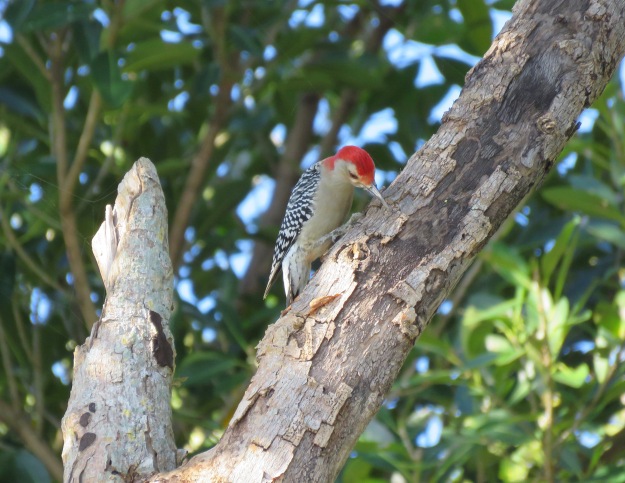 Such a beautiful red noggin.

3 thoughts on “Year of the Hawk”