So I went looking for the first bird of the new year, open to what the fates would send me yet pretty much expecting some sort of majestic raptor or rare wintering warbler.

If it was to be a woodpecker, I was hoping for the jaunty Pileated. If it was to be a heron, I felt a Great Egret would be appropriate… or maybe my oft-sighted pal the Little Blue. A Roseate Spoonbill winging overhead would be a pretty in pink.

If you’ve gone looking for raptors on a clear day, your heart has probably leaped at the sight of a large, soaring bird in the distance– perhaps an eagle or osprey. But if it’s soaring with its wings raised in a V and making wobbly circles, it’s likely a Turkey Vulture. These birds ride thermals in the sky and use their keen sense of smell to find fresh carcasses. They are a consummate scavenger, cleaning up the countryside one bite of their sharply hooked bill at a time, and never mussing a feather on their bald heads.

I was walking the dog, my camera hanging from my shoulder, attuned to the sounds and movements of birds around me. An Osprey above, flying too far away for a photo. The little chirps of what may have been Palm Warblers, invisible in the trees. The noisy calls of Red-bellied Woodpeckers in someone’s backyard.

Instead my first good look at any bird, with a positive ID and photos, was of a committee of vultures, silent silhouettes lazing late into the morning on their dead-tree roost, waiting for sun and thermals to lift them into the sky to circle and scan for brunch. 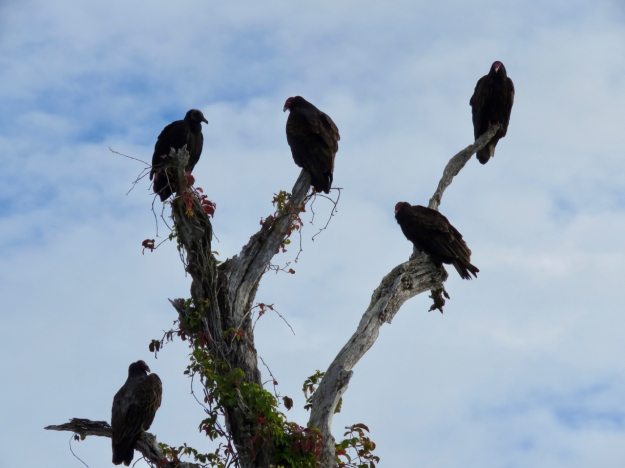 There was one Black Vulture with six Turkey Vultures.

American naturalist William Bartram wrote of the black vulture in his 1792 book Bartram’s Travels, calling it Vultur atratus “black vulture” or “carrion crow”. The common name “vulture” is derived from the Latin word vulturus, which means “tearer” and is a reference to its feeding habits. The species name, ātrātus, means “clothed in black,” from the Latin āter ‘dull black’.

Cathartes means “purifier” and is the Latinized form from the Greek kathartēs/καθαρτης. Is aura from aureus “golden” or Aura, the Greek goddess of the breeze? 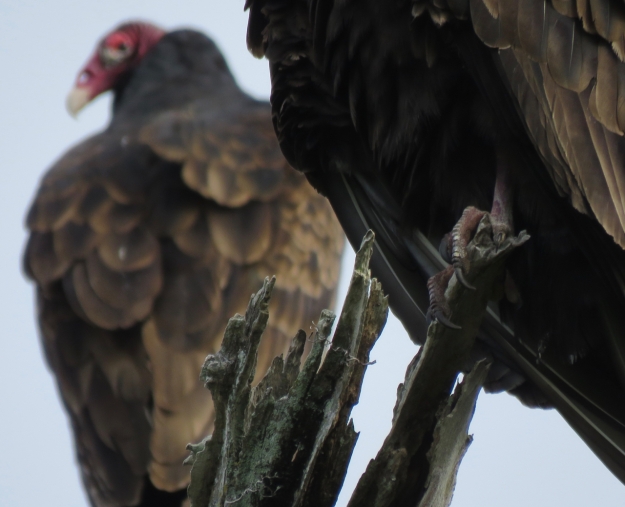 Grasping the tree with its dark pink, clawed foot.

And they benefit us too.

National Geographic: Vultures Are Revolting. Here’s Why We Need to Save Them.

THE VULTURE MAY be the most maligned bird on the planet, a living metaphor for greed and rapaciousness. Leviticus and Deuteronomy classify vultures as unclean, creatures to be held in abomination by the children of Israel. In his diary during the voyage of H.M.S. Beagle in 1835, Charles Darwin called the birds “disgusting,” with bald heads “formed to wallow in putridity.” Among their many adaptations to their feculent niche: the ability to vomit their entire stomach contents when threatened, the better to take quick flight.

Revolting? Perhaps. But vultures are hardly without redeeming values. They don’t (often) kill other animals, they probably form monogamous pairs, and we know they share parental care of chicks, and loaf and bathe in large, congenial groups. Most important, they perform a crucial but massively underrated ecosystem service: the rapid cleanup, and recycling, of dead animals. By one estimate, vultures either residing in or commuting into the Serengeti ecosystem during the annual migration—when 1.3 million white-bearded wildebeests shuffle between Kenya and Tanzania—historically consumed more meat than all mammalian carnivores in the Serengeti combined. And they do it fast. A vulture can wolf more than two pounds of meat in a minute; a sizable crowd can strip a zebra—nose to tail—in 30 minutes. Without vultures, reeking carcasses would likely linger longer, insect populations would boom, and diseases would spread—to people, livestock, and other wild animals.

Pink hibiscus blooming today, on the first day of 2018, in our front yard. The flowers only last a day or so.

First bird of the year, in years past…

2017 (FL): Grackles running around at the gas station.

1 thought on “Cathartes the purifier”