These little birds showed up on our street about a week ago. Small but impossible to miss because they were IN the road every time I drove or walked that way, hopping here and there, bobbing their tails constantly.

I got some ID help from the Facebook group What’s This Bird. They are Palm Warblers. 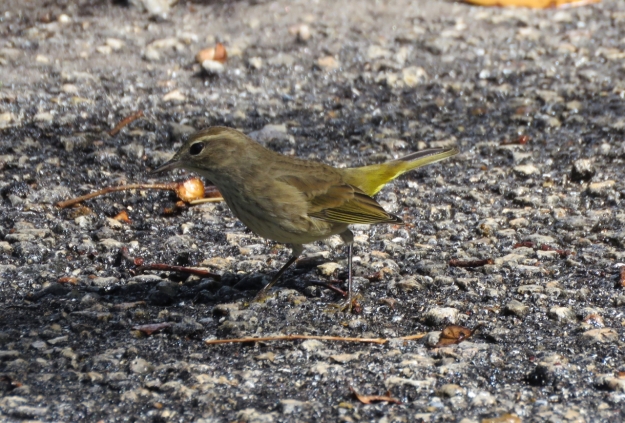 I met them for the first time in late February last year: LINK.

But they looked a bit different because their plumage was changing towards breeding season. Also, they may be part of the western not eastern subspecies, according to a Facebook birder. They “summer” a-way up north in the boreal forest and winter here in Florida, where there are palm trees. 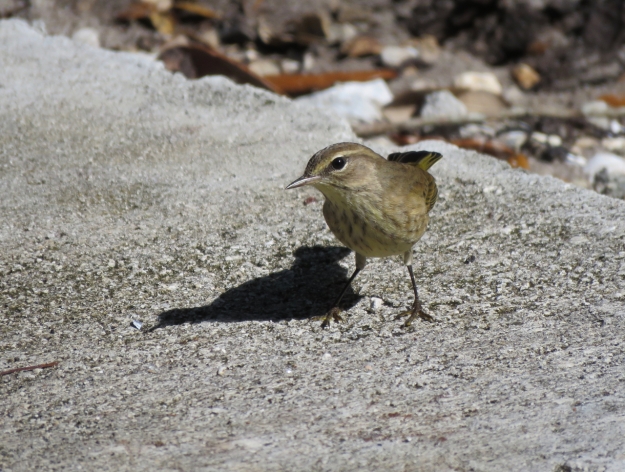 From Cornell Lab of Ornithology…

Though the Palm Warbler’s name might imply it is a tropical bird, it’s actually one of the northernmost breeding of all warblers (only the Blackpoll Warbler breeds farther north). They got their name from J. P. Gmelin who named them based on a specimen collected on Hispaniola, a Caribbean island with a lot of palm trees.

Canada’s boreal forests stretch for miles and miles. The great boreal forest, often called “North America’s bird nursery,” is the summer home to billions of migratory birds and an estimated 98% of all Palm Warblers.

Palm Warblers breed in bogs and areas with scattered evergreen trees and thick ground cover in the boreal forest. During migration they stop in weedy fields, forest edges, fence rows, and other areas with scattered trees and shrubs. They use similar areas on the wintering grounds including second-growth forest patches, marshes, prairies, parks, and coastal scrub.

As the voice for boreal birds, the Boreal Songbird Initiative (BSI) is committed to protecting the Canadian Boreal Forest—the largest intact forest on Earth—on behalf of the billions of migratory birds that rely on it.

And while we are focusing on road creatures, I found this run-over snake a couple of streets away on Lucindia North. I took a photo in order to ID it later. It’s a VENOMOUS Eastern Coral Snake!