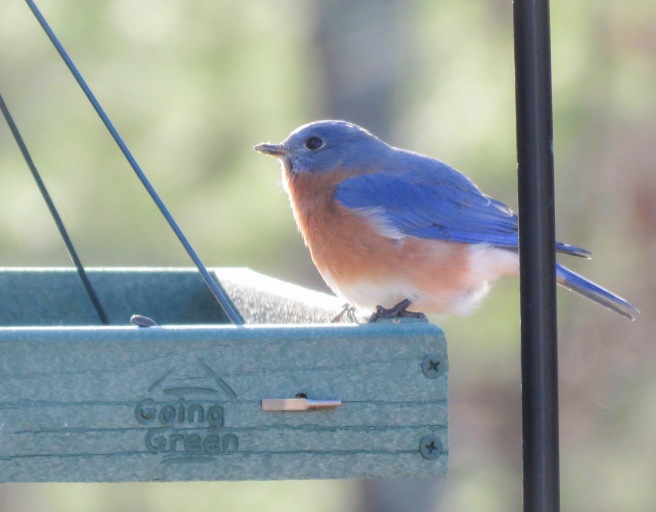 The Bluebird is a Cut Above all others. He seeks nothing in return for his superior being. For his unique color and personality he ask not for special favors. He appreciates your admiration and thanks you for your help. The fact, that in his world, you cared for him is the only fact that mattered. – Wendell Long, 2005

A bluebird, famous for the scrap of sky
Borne on his back – an indigo so bright
That just a glimpse of his distinctive flight,
All swoop and flurry, captivates the eye …
– George Bradley, “New Yorker”, p. 146, Mar. 19, 2001

The bluebird, instantly winsome to young and old alike and to people of modern and traditional sensibilities alike, is American idealism personified – a flying piece of sky, a living poem, a crystal note, an emblem of nature’s moral conscience. – Stanwyn G Shetler, forward to Larry Zeleny’s The Bluebird, How you can Help Its Fight for Survival, 1975

Found a chair in the mangroves a mile down a trail near the #indianriverlagoon #hutchinsonisland #jensenbeach #floridalife
Pretty winter day in the Savannas.
Hold on tight to what you love. - Radar the #germanshepherddog with ball