Good morning, marsh. (Yesterday, from the covered deck of our rental in Cedar Key.)

It was a White Ibis morning. I propped my elbows on the porch railing to take pictures.

Nice little flock, with lots of juveniles. This photo shows about one-third of the number I could see. 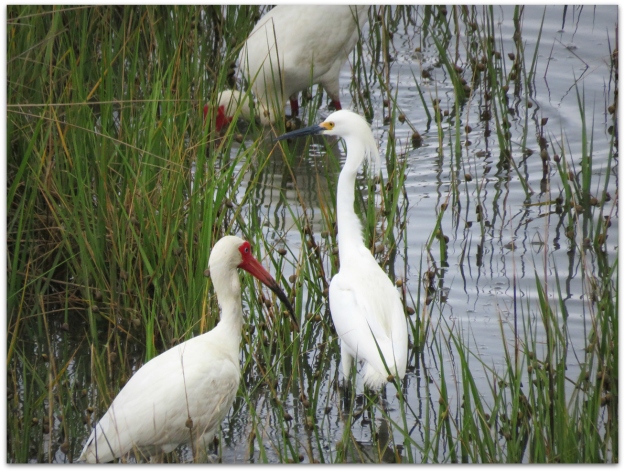 And one Snowy Egret…

Among the most elegant of the herons, the slender Snowy Egret sets off immaculate white plumage with black legs and brilliant yellow feet. Those feet seem to play a role in stirring up or herding small aquatic animals as the egret forages. Breeding Snowy Egrets grow filmy, curving plumes that once fetched astronomical prices in the fashion industry, endangering the species. Early conservationists rallied to protect egrets by the early twentieth century, and this species is once again a common sight in shallow coastal wetlands.

From All About Birds: Other Names 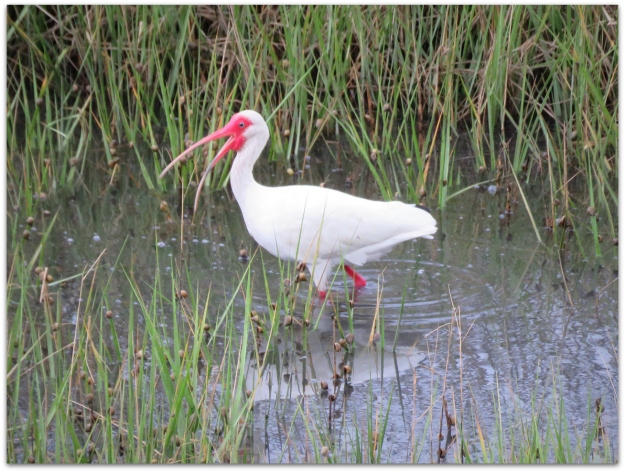 The American white ibis (Eudocimus albus) is a species of bird in the ibis family, Threskiornithidae. It is found from the mid-Atlantic and Gulf Coast of the United States south through most of the coastal New World tropics. This particular ibis is a medium-sized bird with an overall white plumage, bright red-orange down-curved bill and long legs, and black wing tips that are usually only visible in flight. Males are larger and have longer bills than females. The breeding range runs along the Gulf and Atlantic Coast, and the coasts of Mexico and Central America. Outside the breeding period, the range extends further inland in North America and also includes the Caribbean.

Their diet consists primarily of small aquatic prey, such as insects and small fishes. Crayfish are its preferred food in most regions, but it can adjust its diet according to the habitat and prey abundance. It is a tactile, non-visual forager, whose main foraging behavior is probing with its beak at the bottom of shallow water to feel form, and to capture its prey.

And what a strange beak it is. It seems to become one with its face.

The White Ibis has a cheerful look, both elegant and a bit comical.

A walk on a cloudy-rainy day among the early autumn wildflowers of Savannas Preserve State Park off Jensen Beach Blvd. #youbelongamongthewildflowers
It’s been #stormy in the #treasurecoast #floridaweather #autumnalequinox #seaandsky #floridalife #stormclouds #hutchinsonisland #stuartflorida #martincountyflorida #fletcherbeach
She’s such a nice bird! I met a new member of the raptor team during my volunteer time at Treasure Coast Wildlife yesterday. Missy is a juvenile Mississippi kite. She has a permanent wing injury that limits her ability to fly but it looks like she will adapt well to life as an educational ambassador. #mississippikite #floridawildlife #floridabirds #wildliferescue #martincountyfl #nonprofit #wildflorida