Ardea alba, the Great Egret, on the roof of an aviary for injured birds at the Florida Keys Wild Bird Rehabilitation Center in Tavernier, Florida.

I visited last Friday afternoon, during a three-and-a-half day trip to the Sunshine State. Here is a Flickr photo album of the bird center.

There were 4 or 5 Broad-winged Hawks, mostly with wing injuries. One was missing an eye.

A boardwalk led visitors among the different enclosures. Turkey vultures and hawks were segregated with their own kind, but the shorebirds were all together in several large enclosures.

The enclosures were large and airy (outdoors) and very clean. This place seems well-run and well-cared for. The only other person I saw while I was there, besides one staff person, was a man with one leg, another visitor. 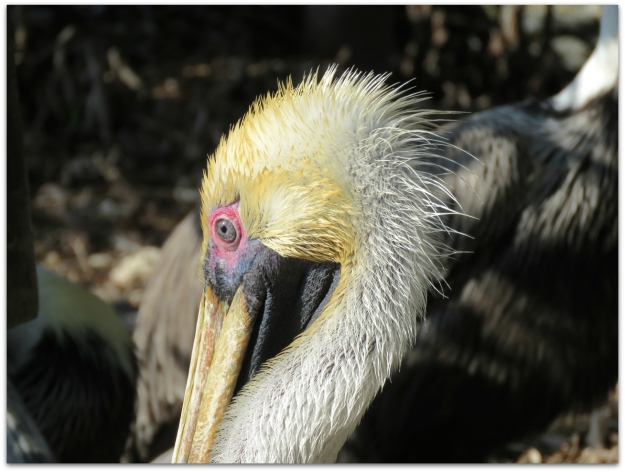 The path among the aviaries ends at the Florida Bay, where I sat on a bench among a bunch of Brown Pelicans and watched White ibises dipping their beaks into the mud in the mangroves.

A sanctuary for healthy as well as injured birds, it seems.

Big yellow eyes. This Great Horned Owl is one of the permanent residents due to injuries. 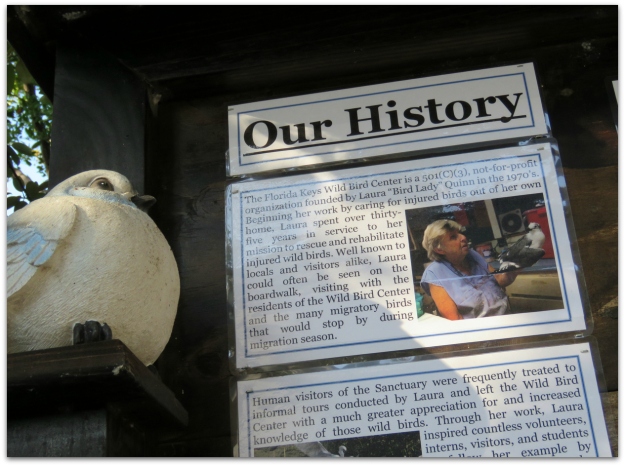 Three cheers for Bird Ladies, especially this one.

The Florida Keys Wild Bird Center (The Center) is a not for profit 501(c) 3 conservation organization dedicated to the rescue, rehabilitation, and release of native and migratory wild birds that have been harmed or displaced, to providing or locating a humane shelter for those birds that cannot be released, and to educating the public toward the importance of coexistence with all wild bird species. 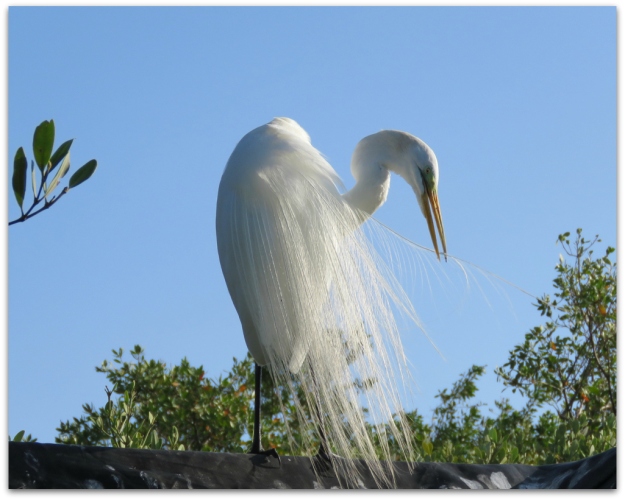 Impractical but pretty feathers, grown by the Great Egret in breeding season. This bird kept appearing just ahead of me during my hour long visit, posing it almost seemed.

The Great Egret is the symbol of the National Audubon Society, one of the oldest environmental organizations in North America. Audubon was founded to protect birds from being killed for their feathers.

Poof, a small gust of wind and the nuptial plumes were a mess.

The pristinely white Great Egret gets even more dressed up for the breeding season. A patch of skin on its face turns neon green, and long plumes grow from its back. Called aigrettes, those plumes were the bane of egrets in the late nineteenth century, when such adornments were prized for ladies’ hats.

I have more photos from my trip and will make a couple more albums, when I get around to it. 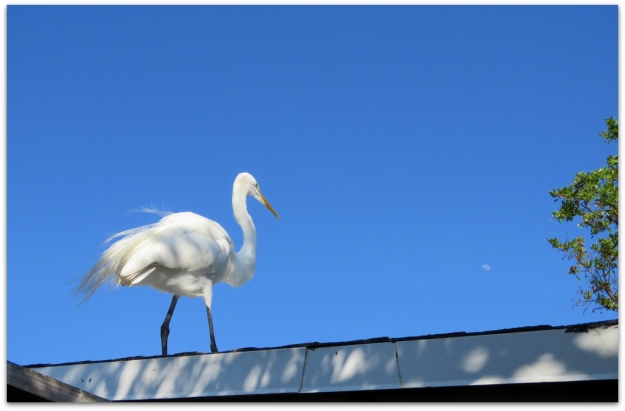 Great Egret on the roof, with the moon.

More than 95 percent of the Great Egrets in North America were killed for their plumes in the late nineteenth and early twentieth centuries. Plume-hunting was banned, for the most part, around 1910, and Great Egret populations quickly began to recover.

Torn cloth tossed up on the rocks, the reddest of reds, caught my eye this morning. #flotsam
Mirror, mirror on the trail.
Ruby faces into the brisk northeast wind. Cloudy and 70 degrees #winteriscoming #coastalflorida style! #beachdog