Dark-eyed Junco on the deck. Looks like a white egg with a head and two feet, dyed charcoal gray on top. A winter Easter egg.

A flock of 10 or 12 was here yesterday, hopping around on top of the snow under the feeders, occasionally venturing closer onto the deck or railings.

Dark-eyed Juncos are neat, even flashy little sparrows that flit about forest floors of the western mountains and Canada, then flood the rest of North America for winter. 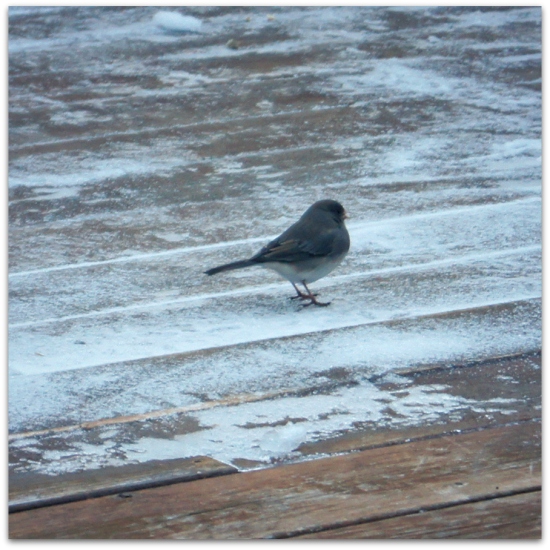 Our juncos tidy up after the messier birds. They seem to like millet, which is scattered by many other birds who prefer the sunflowers and peanut bits.

Dark-eyed Juncos are primarily seed-eaters, with seeds of chickweed, buckwheat, lamb’s quarters, sorrel, and the like making up about 75% of their year-round diet. At feeders they seem to prefer millet over sunflower seeds. 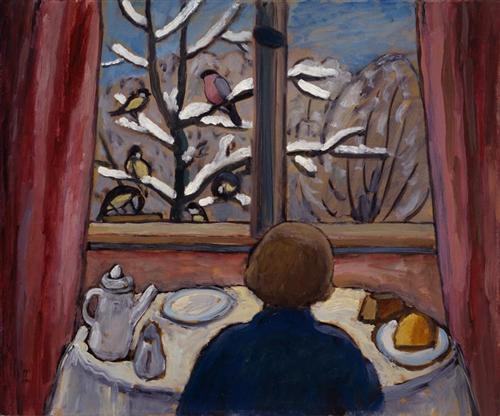 Breakfast of the Birds, Gabrielle Munter, 1934

I signed up for Cornell Lab of Ornithology’s Project Feederwatch yesterday, to count birds this winter. My kit should arrive in a few weeks.

FeederWatchers periodically count the birds they see at their feeders from November through early April and send their counts to Project FeederWatch. FeederWatch data help scientists track broadscale movements of winter bird populations and long-term trends in bird distribution and abundance.

Anyone interested in birds can participate. FeederWatch is conducted by people of all skill levels and backgrounds, including children, families, individuals, classrooms, retired persons, youth groups, nature centers, and bird clubs. Participants watch their feeders as much or as little as they want over two consecutive days as often as every week (less often is fine). They count birds that appear in their count site because of something that they provided (plantings, food, or water).

Looking forward to it.