In winter Red-winged Blackbirds gather in huge flocks to eat grains with other blackbird species and starlings.

A large flock – maybe 40 birds – visited that morning, taking turns flying from the trees to scrounge fallen seed from the ground under the pole feeder. But a few ventured closer to the house, where a human and a cat watched them through the windows.

We remember them for the red on their wings, but don’t forget the yellow. They are members of the family Icteridae.

Most species have black as a predominant plumage color, often enlivened by yellow, orange or red. The family is extremely varied in size, shape, behavior and coloration. The name, meaning “jaundiced ones” (from the prominent yellow feathers of many species) comes from the Ancient Greek ikteros, through the Latin ictericus. This group includes the New World blackbirds, New World orioles, the bobolink, meadowlarks, grackles, cowbirds, oropendolas and caciques.

Yesterday, waiting at a stop sign across from Optima Bank to turn onto Route 1 in North Hampton, I spotted a mixed group of blackbirds and cowbirds… plus one Yellow-headed Blackbird (very rare in the eastern U.S.) I would have thought my eyes were deceiving me, except I subscribe to the local birder email list and knew people had been seeing this flock around, with an eye-catching male and a couple of females. 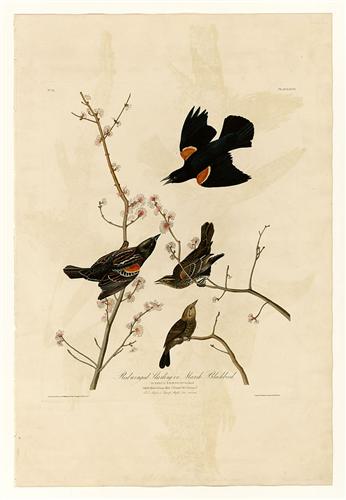 The nightingale has a lyre of gold,
The lark’s is a clarion call,
And the blackbird plays but a boxwood flute,
But I love him best of all.

For his song is all of the joy of life,
And we in the mad, spring weather,
We two have listened till he sang
Our hearts and lips together.